As the Russian parliament, or Duma, Friday gave first approval to a new bill that would force non-governmental organizations operating in the country that receive foreign funding to brand themselves as “foreign agents,” NGO’s are wondering precisely what the term may mean for their future operations. 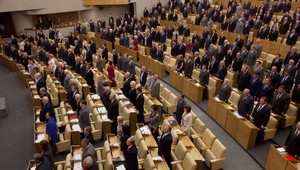 Meanwhile, major international pressure is could be brought to bear on the bill’s supporters in the form of threatened travel restrictions and asset freezes for what the international community is calling human rights abuses in Russia.

The bill, which 323 of the Duma’s 450 deputies approved on Friday, would require all NGOs that receive funding from abroad and engage in “political activities” to register as “foreign agents,” a pregnant Cold War era term.

Friday saw some minor official dissent to passing the bill’s vague wording from Russia’s Supreme Court, the Kremlin’s Presidential Council on the Human Right’s, and the Federation Council, the Duma’s upper chamber.

According to observers, though, it likely to be ram-rodded hastily through the lower and upper houses of the Duma, where President Vladimir Putin’s United Russia party – which introduced the bill ­–­ holds a majority, underlining its importance to Putin as he tries to stifle the biggest protests against his rule since he first rose to power in 2000.

“It won’t even take a month,” Tamara Morshchanova, a member of the presidential human rights council, whose recommendations have largely been ignored by Putin since his return to the presidency in May, told Reuters, despite the group’s cataloguing of the bill’s inconsistencies with the Russia’s constitution.

Where Bellona’s work in Russia stands in this fray of new legislation is under question, Alexander Nikitin, chairman of the Environmental Right’s Center (ERC) Bellona has said.

“If we oppose an environment ministry initiative … or nuclear policy, is that a political activity?” he said.

“Of course, we are not vying for power,” Nikitin said, reiterating the point that Bellona’s activities in Russia are entirely apolitical.

Nikitin’s worries center on the connotations of the term “foreign agent.”

A former submarine officer and nuclear safety inspector, Nikitin was jailed on espionage charges in 1996 for contributing to a Bellona report about nuclear safety in the Northern Fleet. He was finally acquitted by the Presidium of the Russian Supreme Court – the only person to ever defeat the Federal Security Service (FSB) – and its precursor, the KGB – in court.

“[Bellona has] been called all sorts of names. It doesn’t bother us,” Nikitin said.

“But if I were to acknowledge being a foreign agent, I would acknowledge that our organization is political,” he said.

“In that case, we would lose our sponsors because the foundations that fund us don’t want to support a political organization.”

In a press conference at Interfax on Friday, Mikhail Fedotov, head of the presidential council for human rights, told reporters that stricter rules for NGOs that receive foreign funding are inconsistent with the constitution, Civil Code, and positions of the European Court of Human Rights and Constitutional Court of Russia.

Tamara Marschakova, another member of the human rights council and former Constitutional Court judge, described the bill is a shining example of legal nihilism. “This bill denies the law in all its aspects,” she said, as quoted by Interfax.

Another member of the human rights council Mara Polyakova said the bill contradicts the idea of dialogue between the government and civil society.

According to Nina Belyaeva , another human rights council expert and head of the Higher School of Economics department of public policy, the bill violates the principle of the law and, together the recent law on rallies, reinforces inequality between the government and society.

Yet, another human rights council expert, Boris Strashun, said he hoped the Russian Constitutional Court might intervene and revoke the law if necessary.

Concerns among NGOs also lie with the vague wording of the bill, which gives it wide latitude to crack down on all manner of speech critical of the government.

If the bill becomes law, applicable NGOs would also be forced to display the label “foreign agent” on their websites and publications, as well as to publish a biannual report of their activities and an annual financial audit.

United Russia deputy, Alexander Sidyakin, the main author of the bill, has said in interviews that he has only modeling it on the 1938 the US Foreign Agent Registration Act  that obliges foreign-funded NGOs to disclose their activities.

‘Misleading’ comparisons to US law

But that law, which has undergone several changes since its adoption, was mainly targeted at pre-WWII Nazi activity in the US. Further, the law, in its current iteration does not require foreign NGOs to disclose their financial activities.

Dmitry Shabelnikov, Moscow director of the Global Network for Public Interest Law, told the The Moscow Times that the comparison to US law is “misleading.”

“The US legislation regulates a very narrow group of entities acting at the order, request or under the direction of a foreign state or entity,” Shabelnikov told the paper.

Unlike the US law, the Russian bill classifies NGOs as “foreign agents” for an indefinite period of time once they receive funding from any foreign source, without even specifying who exactly their principal is.

“According to the Russian bill, it doesn’t matter how and for what purposes the money is received and spent,” Shabelnikov said.

Russian ‘Foreign agents’ operating in the US

Those “foreign agents” registered under the US law are mostly tourism boards, law and PR firms, according to a list on the US Justice Department’s website.

Critics of the Russian bill emphasize that it defines “foreign agents” as those NGOs that “influence public opinion,” which can apply to almost any organization, as noted last week by Presidential human rights council head Mikhail Fedotov to RIA Novisti.

“The law contradicts the Russian Federation’s constitution, which calls for political diversity and ensures every citizen has the right to participate in managing state affairs,” he said.

Further, “political activities” is not a legally defined term, which further leaves the bill open to wide interpretation, Shabelnikov told the Moscow Times.

Sidyakin, in during a talk show on Ekho Moskvy radio on Wednesday defined “political activities” as “rallies, marches and pickets,” and did not elaborate further.

Some opponents of the bill, most notably Lyudmila Alexeyava of the Helsinki Group have called for travel bans for signatories of the bill and asset freezes on their foreign bank accounts.

In order to encumber such an effort, all 237 members of United Russia Friday afternoon listed themselves as coauthors of the bill.

But a Sunday meeting of the 56-nation Organization for Cooperation and Security in Europe (OSCE) – of which Russia is a member ­­– may make that endeavor easier.

The OSCE Sunday chided Moscow on its human rights record and urged governments to impose sanctions by banning visas and freezing the assets of Russians connected to the death of a crusading lawyer named Sergei Magnitsky.

The OSCE’s suggestion is similar to that of the US Magnitsky act.

Magnitsky, who had alleged wide-scale tax fraud sanctioned by Russian officials before himself being arrested, died one day before the one year limit that he could be held without trial would expire. His case exploded internationally as it came to light he died as a result of torture and police brutality.

Many rights organizations that are falling under the heel of the proposed new legislation are quck to see how the Magnitsky act could cause the Kremlin some pain.

“I am determined to ask the US Senate, the House of Representatives, as well as the European Parliament to add the authors [of the NGO bill], who violate the supremacy of the law, to the Magnitsky list,” Alexeyeva said Friday in Moscow, according to RIA Novosti.

She also intends to publish on the Internet a list of MPs who will vote for adoption of the bill, and appeal to the Russian president to veto it.

“Something like [the Magnitsky Act] could impose limits on these possibilities.”