Russian police raids ahead of opposition rally stoke rage and signals show-down with Kremlin; independent media shut down before march

Russian investigators searched the apartments of several opposition leaders Monday and called them in for questioning Tuesday, making it difficult if not impossible for them to lead a mass demonstration against President Vladimir Putin planned for today’s June 12 national holiday. 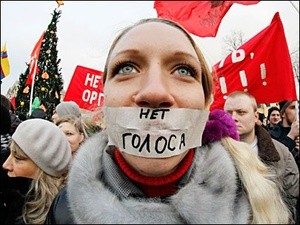 It was a sudden escalation in pressure on the opposition, but tensions already were running high. The last opposition rallies in the days surrounding Putin’s inauguration led to violence on the streets caused largely by OMON special police randomly arresting, beating and detaining anyone who looked like they might attend rallies.

As activists began to gather in a drenching rain, which later cleared, for the latest round of what are dubbed “The March of Millions,” access to the websites of some of Russia’s most independent media like Novaya Gazeta, and TV Rain appeared to have been shut down as Bellona was unable to access their websites.

Mikhail Zygar, editor-in-chief of the TV Rain channel, said its website had come under attack by hackers.

“We’re trying to get back on track. The attack started at 11:00 [Moscow Time],” he told the Interfax news agency.

Independent radio station Ekho Moskvy, which had earlier been reported by the BBC to be down was found at 1:40 pm Moscow time by Bellona to be functioning, albeit slowly.

Today’s rally will show what effect that pressure is having: whether it is reducing Muscovites’ will to take part in demonstrations, or – on the contrary – provoking greater anger on the streets.

Yet, thousands of anti-government protesters are expected to march through the Russian capital Moscow, demanding fresh elections and a new president, judging by the outrage registered on social networks like twitter, Facebook and vKontakte.

The top Twitter hashtag in Russia on Monday was “Welcome to the Year ’37,” a reference to the height of the purges under Soviet dictator Josef Stalin.

While many observers had hoped Putin would call a truce with hundreds and thousands of people who have marched against rigged parliamentary elections since December and against his inauguration as president on May 7, he has instead taken a hard line against the opposition since returning for his third presidential term.

“The problem is that people thought that Putin could change, but he cannot,” said Alexander Nikitin, chairman of the Environmental Rights Center (ERC) Bellona.

“But he is calculating, malicious, and cruel and he will be that way in his soul to the end.”

Return to hard line against dissent

A measure Putin signed into law on Friday will raise fines on those who take part in unauthorized protests 150-fold, to nearly the average annual salary in Russia.

Today’s protest has city approval, but any actions that violate the agreed upon location and timeframe could give police a pretext to make arrests.

Opposition activists predict the government crackdown on dissent and the anger it has fueled will bring out more protesters on today’s holiday.

But the Kremlin is betting that the tough measures will frighten away the young white-collar professionals whose new political activism has posed the first serious challenge to Putin since he came to power in 2000.

All were issued summonses for Tuesday for questioning by police. The summonses are timed for exactly one hour before the rallies are to begin.

Police left Navalny’s apartment 13 hours after they entered, carrying boxes, computer disks containing photos of his children, along with clothes including a sweatshirt bearing an opposition slogan.

Navalny emerged later and told reporters the summons was clearly aimed to keep him from the rally but vowed that he would attend, he said in remarks to BBC television.

“They rifled through everything, every wardrobe, in the toilet, in the refrigerator. They searched under the beds,” Udaltsov told reporters.

“I never thought we would return to such repression in this country, but we are seeing it turn into totalitarianism,” said Sobchak , also in remarks on the network.

In an earlier twitter post, she wrote: “People barged in at 8am, gave me no chance to get dressed, robbed the apartment, humiliated me.”

Following the raids, US State Department spokeswoman Victoria Nuland said in nationally televised remarks that Washington was “deeply concerned by the apparent harassment of Russian political opposition figures on the eve of the planned demonstrations on June 12.”

“Taken together, these measures raise serious questions about the arbitrary use of law enforcement to stifle free speech and free assembly,” she said.

According to Bellona’s Nikitin, Putin has two options to deal with the opposition – either divert public attention with escalating tensions in Syria, Iran or Israel, in all of which Russia has a state, or provoke extremism in Russia with trumped up terrorism and clashes with police.

Both, noted Nikitin are tactics that Putin used when he first came to office in 2000, provoking a renewed, bloody conflict with the break away republic of Chechnya, which stoked extremist hatred for Chechen nationals across Russia.

One worry for Putin, said Nikitin, is Russia’s economy – especially if oil demand decreases or the rouble continues to wobble on a downward spiral.

“If Russia’s economy begins to fail, the only option [Putin] will have is holding onto power by any means necessary,” said Nikitin.

“The worst case scenario would be bloodshed in Russia ­– the scenario of provoking extremism will very possibly lead to that,” he said.