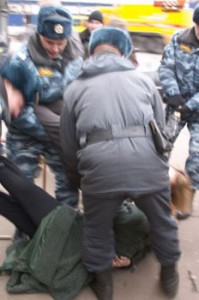 The bill was approved by the State Duma, or lower house of the Russian parliament, on Desember 23d 2005 in third and final reading.

"The passing of the bill may be considered as an official declaration of war by the state against those sproutings of civil society that still exist," the head of the Russian Union of Journalists, Igor Yakovenko, told Ekho Moskvy radio in December. "Passing the bill is evidence of Russias transition from authoritarianism to totalitarianism."

"It is impossible to openly prohibit all independent NGOs. The Kremlin is building up a mechanism to make them die," said Alexander Nikitin, chairman of Bellona Environmental Rights Centre in St Petersburg.

Putin reworks the bill
After vocal protests from Russian and foreign NGOs, as well as from Western governments, Putin ordered lawmakers to water down the measures proposed in the original version of the law. In particular, the requirement for foreign NGOs to register as Russian entities has been removed. Foreign NGOs are now only obliged to notify the registration authority of their existence. Whether practice turns out as simple as theory remains to be seen.

According to the law, foreign citizens may be members and founders of Russian NGOs, "while they are legally staying on the territory of the Russian Federation."

"Its strange: the bill reads, if they are staying in Russia with a valid visa they can be founding members of the organization, but when they leave to go abroad they lose their membership," Niktin said.

No Khodorkovsky-esque problems for Putin anymore
In November, Putin ran into reluctance from a large business NGO, the Russian Union of Industrialists and Businessmen, to exclude oligarch and prominent Putin critic Mikhail Khodorkovsky from the organization’s ranks. Khodorkovsky was dramatically arrested in 2003—as a result of what is widely considered as a politically motivated persecution—and in 2005 sentenced to nine years in prison. Under the new law, exclusion would not be a problem: another article of the bill stipulates that prisoners automatically lose their membership in NGOs. According to human rights activists, such a norm is a violation of the Russian Constitution.

Threat to national feelings
The law contains very restrictive and in many places vague language, which gives the authorities the possibility to make arbitrary decisions.

The law states, for example, that an organization can be refused registration if its name offends citizens’ moral, national or religious feelings.

A foreign NGO can be refused registration if the registering body finds that the purpose of the particular NGO poses "a threat to the sovereignty, political independence, territorial unity, national unity and national uniqueness samobytnost, cultural inheritance and national interests of the Russian Federation."

Financial control over NGOs will also become harsh. Under the law, NGOs not only have to inform the tax authorities, what has always been the case, but now also have to report to the registering body about sums received from abroad and the purposes of spending, and fill out a form produced by the government.

"If the government invents such a difficult form that a new bookkeeper will be needed to work with it, many organizations will have to close," said Nikitin.

"With the aim of protecting constitutional order, morality, health, rights and interests of other persons, in the interests of defensive capacity and security," reads another article, the registering body may prohibit a branch of a foreign NGO or foundation from giving money to certain recipients.

"How a foundation may be banned from giving money out, if both the foundation and recipient organization are legal, and not prohibited by the courts?," Nikitin asked.

Contradicting the primary principles of democracy
Although the bill has being polished by the Putin administration in fear of being thrown out of the G8, it still contains clauses that free the hands of the authorities to put a lid on any NGO, foreign or Russian, should there be the need. The Putin regime has taken control over the media, parliament, regional governors—and the NGOs were the only "uncontrollable factor" in Putin’s Russia. With the adoption of the NGO bill this is no longer the case.

"This law contradicts the primary principles of democracy and fundamental human rights. The shocking fact is that the State Duma would even consider something like this," Bellona President Frederic Hauge said before the first vote in Duma. Oslo-based Bellona has two locally registered offices, in St Petersburg and Murmansk.

"This is one more proof of how important it is to build a civil society in Russia that is able to defend the rights of the people," Hauge said.

"The law will become a hindrance not only to the work of certain NGOs, but will impair cooperation between regions such as the Barents Sea region in Northwest Russia, the Northern provinces of Finland, Sweden and Norway."