Boris Pustynstev, one of Russia’s most seasoned and respected human rights pioneers, whose tireless efforts to force Russia – and before that, the Soviet Union – to obey its own constitution spanned more than half a century, died Tuesday after a long illness at the age of 79.

Published on March 6, 2014 by Charles Digges 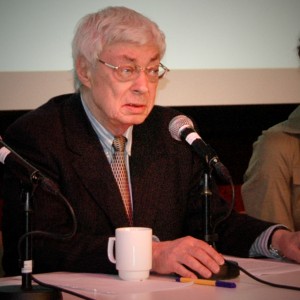 Boris Pustynstev, one of Russia’s most seasoned and respected human rights pioneers, whose tireless efforts to force Russia – and before that, the Soviet Union – to obey its own constitution spanned more than half a century, died Tuesday after a long illness at the age of 78.

He is survived by his wife, Elvira, and his daughter, Anna.

That he passed on the day President Vladimir Putin delivered his mendacious, slippery press conference justifying a Russian troop presence in Ukraine is something that would not have failed to bring a darkly wry smile to Pustyntsev’s lips.  Even in the face of the latest Kremlin snow job, Pustyntsev could manage a belly laugh over authorities’ efforts to insist that two plus two equaled five.

Pustyntsev’s colleagues say they need him now more than ever.

“Of course, the loss of such a person as Pustyntsev at this time when Russian authorities have cast aside all restraint, and the very idea of defending human rights is anathema to the powers that be as it was in the Soviet Union – is a redoubled loss,” said Yury Vdovin, Pustyntsev’s co-chair of their St. Petersburg-based rights organization, Citizens’ Watch.

“Boris had it in him to stand against this system,” said Vdovin, “I hope nevertheless that we will find the strength to resist the impudence of Russia’s ruling class – and to do that, we will draw on Boris’s experience.”

Along with guiding the efforts of Citizens’ Watch, Pustyntsev was a co-founder of the Environment and Rights Center (ERC) Bellona, co-chaired the St. Petersburg branch of the Memorial human rights organization between 1991 and 1996, and sat on the Russian Presidential Council for Civil Society and Human Rights from 2004 until resigning his post when Putin returned to his third presidential term in 2012.

Pustyntsev also was the recipient of numerous human rights awards, including the Order of Service from the Hugarian government for his activism against the Soviet military occupation of country.

This opposition activity led in 1956 to his prosecution by the KGB, and a conviction under the Soviet Union’s notorious “counter-revolutionary” article. He spent 5-years in a Soviet prison camp for political prisoners.

Born in 1935 in the Far Eastern city of Vladivostok, Pustyntsev became active as a student in a youth group that called on the Soviet government to obey its own constitution.

His father, Pavel Pustyntsev, was promoted in 1951 to serve in Leningrad as chief of Rubin, the Soviet, now Russian, premier engineering division for nuclear submarine design.

The move West seemed to stick.

In 1954 he entered the Leningrad Pedogogical Institute for Foreign Languages, and his student political activities continued, until his 1956 arrest while spreading leaflets protesting the Hungarian occupation.

His was convicted in 1957 and his original sentence was 10 years, but he was freed in 1962 after serving five. After his release, Pustyntsev graduated from the evening department of the Alexander Herzen Pedagogical Institute with a degree in the English language. Pustyntsev worked as a bibliographer, technical translator, editor in the publishing industry, author of texts for simultaneous translation at foreign film screenings, and as a dubbing director.

During a stint with TallinFilm in Estonia, where he dubbed scripts from English films into Russian, he told me in a conversation in the early 1990s that his employers had said his past persecution by the KGB was his “best recommendation” for the job.

His English education further progressed under the tutelage of the BBC’s shortwave jazz radio shows that he would religiously tune to in Leningrad, he told me during one of our many get togethers at his apartment.

The bookshelves of Pustyntsev’s St. Petersburg apartment groaned under the weight of meticulously preserved 78 rpm records  – live performances of Ella Fitzgerald, Duke Ellington, Louis Armstrong, Count Basie that perhaps only a handful of other people in the world owned copies of.

His English was therefore peppered with the hep-cat argot of be-bop and swing, jazz being one of the nerve centers of West-leaning Soviet dissident culture in the bad old days.

In 1992, together with a group of human rights advocates, lawyers, journalists, members of the Russian parliament, the State Duma, and members of the City Council of St. Petersburg, Pustyntsev founded the public human rights organization Citizen’s Watch.

Citizen’s Watch was founded as an instrument to help civil society establish public control over the activities of the state’s law enforcement and to prevent violations of citizens’ constitutional rights.

Involvement in the Nikitin case

In the latter half of the 1990s, pressure began mounting on ecological activists striving to bring the public’s attention to various environmental risks. This fell particularly hard on Alexander Nikitin, the former submarine captain and Russian naval radiation inspector who co-authored Bellona’s report, “The Russian Northern Fleet: Sources of Radioactive contamination.”

Nikitin, who revealed nothing but information that was already available to the general public, was rewarded for his contribution to the report with his arrest in 1995 by the Federal Security Service, or FSB, the successor organization of the KGB. He was charged with treason and espionage – charges that at the time carried the death penalty.

Pustyntsev joined forces with Nikitn’s prominent lawyer Yury Shmidt and environmental journalist Viktor Teryoshkin in a venture to launch an organization that would defend both ecological activists and the rights of Russian citizens to a clean environment, as well as truthful and reliable information about its condition.

Prisoner of Conscience gets first human rights tutelage from Pustyntsev

Nikitin was eventually freed by Shimidt’s efforts after 11 months in FSB custody – during which he was declared the first Russian Prisoner of Conscience since Andrei Sakharov. Nikitn was let out of jail on the condition that he not leave St. Petersburg. While his court case dragged on, Nikitin became the director of the group envisioned by Pustyntsev, Schmidt and Teryoshkin, the Environment and Rights Center Bellona, which was founded in April 1998.

It was at first, said Nikitin, a strange fit. When the case against him began, he had just been a military man doing what he considered to be the right thing. He was now in a different world of dissidents, pitted by his conscience against the authoritarian state that he has served – a form of betrayal made so familiar by Solzhenitsyn’s Gulag Archipelago.

It was, said Nikitin, Pustyntsev who was his guide in this new terrain.

“I met Boris Pavlovich in December of 1996, on about the third or fourth day after I was let out of jail. My wife and I went to the human rights organization Citizens’ Watch. While sitting in jail, I had heard a lot about Boris from Shmidt,” Nikitin said.

“Before meeting him, I only poorly knew who human rights advocates where,” he said. “I remember that when we founded the Environment and Rights Center Bellona, Boris and Shmidt argued over what the organization should be called – Shmidt insisted we call it the Environmental Rights Center, and Pustinstev insisted on ‘Environment and Rights. Pustintsev was more convincing. He made a human rights and ecological organization and pulled us all into the sphere of human rights.”

In 2000, Nikitin was fully acquitted of all charges against him, making him, so far, the single person to ever win an espionage case against the FSB thanks to the strenuous efforts of Schmidt, Putsyntsev and an unswerving emphasis in the case on the basic and unassailable right to one’s conscience.

“He will live forever in our memory,” Nikitin said.

Maria Kaminskaya contributed to this report.