Yury Schmidt , the crusading Russian human rights lawyer and the only Russian attorney to go head to head with the Russian Federal Security Service – the successor organization to the KGB – and win died Saturday in St. Petersburg after a long battle with cancer. He was 75.

Published on January 16, 2013 by Charles Digges 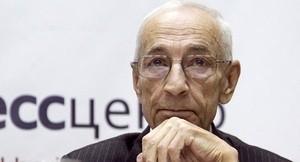 His passing leaves a vacuum in the Russian human rights legal community and it is questionable whether any lawyer working in Russia today has the stature to pick up Schmidt’s work where it was so untimely cut off.

A long-time contributor to Bellona’s work, one of Schmidt’s many crowning achievements was securing the acquittal of Bellona’s Alexander Nikitin in a five-year-long espionage case in which Nikitin, a former submarine captain, stood accused of passing state secrets to Bellona for one of its reports on radiological hazards posed by Russia’s Nuclear Navy’s Northern Fleet.

While the FSB insisted Nikitin had passed the organization state secrets, Schmidt and never had any doubt of his client’s innocence, who he fought tirelessly with Bellona to free from pretrial detention in St. Petersburg’s notorious Kresti prison – and succeeded after 11 months of endless legal battles after the initial espionage charges were leveled against Nikitin in 1996.

But that was hardly the lot of it.

[picture1 {Nikitin’s, with hands clasped, penultimate victory in 1999 in a St. Petersburg city court room. The verdict of innocence here would be upheld in September 2010 by the Presidium of the Supreme Court.}]

Before Schmidt cleared Nikitin of all wrong-doing, the two would wend their way through five years and 8 court proceedings, leading eventually to the presidium of the Russian Supreme Court, which finally cleared Nikitin of the espionage charges.

Nikitin is in St. Petersburg representing Bellona for Schmidt’s funeral.

“Yury Schmidt was probably Russia’s leading human rights lawyer and certainly the bravest,” said Jon Gauslaa, who fought the battle for Nikitin’s acquittal with Schmidt while working with Bellona, and who now works with Norway’s Ministry of Justice.

“It was a privilege to have known him and to have worked with him,” said Gauslaa. “His passing is a great loss. He will be missed.”

“Schmidt’s experience and expertise has been invaluable to both Bellona and a number of other NGOs operating in Russia,” he said. “The way he secured Nikitin’s freedom under the circumstances of constant FSB pressure, Bellona is eternally grateful.”

Always fearless in the face of the most obvious FSB-trumped-up charges, Schmidt went on to fight for the freedom of oil tycoon Mikhail Khodorkovsky, who the administration of Vladimir Putin had painted as public enemy number one over alleged tax-evasion charges – the sentence for which the Russia government is currently considering softening.

Schmidt had headed Khodorkovsky’s defense team since April 2004, and he continued working on the case even after he fell ill with cancer.

In comments from a 2011 interview posted on Khodorkovsky’s website, Schmidt said: “I told Mikhail Borisovich [Khodorkovsky] that I’m not used to dying with an unfulfilled sense of duty, and I thanked him for supporting me. He really does support me. I want to be here to see his release.”

Schmidt received numerous awards throughout his career, including an award for defending the rights of an individual from Human Rights Watch, and a Femida award, one of the most renowned legal prizes in Russia.

In a sense, Schmidt, who was born in 1937 in Stalin’s Gulag – his mother a Soviet-era political prisoner and a his father a longtime human rights lawyer – was destined to become one of Russia’s brightest human rights stars. Schmidt himself did not meet his father until he was 18, when his father was finally released from the camps.

He began his career in the 1960s as a criminal attorney. Schmidt wanted to defend political prisoners but due to his family’s history was not allowed to.

“My father was imprisoned for 27 years in Soviet times. My mother was in internal exile. My social circle was that of dissidents. My anti-Soviet convictions came very early in my life,” he said in a interview given to this reporter in the late 1990s.

“Schmidt is like a reflection of Russian history and he was always on the frontline beginning with his birth in Gulag,”said Vladislav Nikiforov, head of Bellona’s Russia Group.

“He was always involved in most prominent historical cases,” he said.

When the Soviet Union fell in 1991, Schmidt founded the Lawyers’ Committee for the Defense of Human Rights. The Nikitin case secured his reputation as one of Russia’s premier defense attorneys.

Some of Schmidt’s other notable cases included the defense of two journalists in Perm accused by the FSB of revealing state secrets in their articles and of Yury Samodurov, director of the Sakharov Museum, on charges of inciting religious hatred. He also represented Galina Starovoitova’s family following the lawmaker’s assassination.

“To describe this man as a legend in his field would barely do justice to the intelligence, compassion, and courage he displayed on a daily basis, tirelessly working for his beliefs long after it would have been more comfortable to relent and conform,” wrote Robert Amsterdam, an attorney who served on Khodorkovsky’s international defense team, on his blog on Radio Free Europe/Radio Liberty.

“He went toe-to-toe with the darkest, most intimidating elements within Russia’s security apparatus and never flinched.”

Always animated, articulate and fiery, this reporter was interviewing Schmidt in his office in St. Petersburg’s now-defunct UNESCO building on another subject for another publication when Schmidt received the fateful call of Nikitin’s arrest.

Schmidt immediately flew into action, putting together petitions for Nikitin’s release and told this reporter, “Charles, call your magazine and tell them you have a bigger story.”

I had no choice but to comply. The Nikitin case was already in motion from the moment Schmidt slammed down the telephone receiver.

In one of Schmidt’s last international appearances by video conference in Oslo in 2010 to celebrate the decade anniversary of Nikitin’s acquittal, it was apparent in his somewhat weakened speech and lack of characteristic gesticulation that both his illness and the grind of the Russian system were catching up with him.

He was pessimistic about Russia’s legal future and saw no young lawyers on the horizon to fill his shoes and take up the slack of much of the work that he was doing.

But he did, nonetheless, remain optimistic that one victory against the FSB could lead to another – and that if others were willing to step up to the plate, real blows could be dealt against Russia’s shadowy second government.

With a nod to Yury Marokovich Schmidt, it is Bellona’s hope to continue that important work, and to keep the memory of the man who stared down the FSB and won alive.