Ten years ago today, Russia’s supreme court issued a final verdict, topping off a five year legal battle that Bellona’s Alexander Nikitin, a former Russian naval officer and nuclear safety inspector, was innocent of all charges of treason and espionage levelled against him by the Federal Security Service, or FSB, the KGB’s equally shadowy successor organisation.

Published on September 12, 2010 by Charles Digges 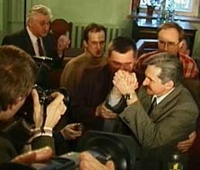 But Nikitin himself is quick to point out that his case, which should have been a benchmark for further progress, was an isolated incident that would not be repeated in the Russia’s FSB-dominated corridors of power.

Of his acquittal, Nikitin said, “It was a relief after unbelievable stress, which had continued over the course of a whole five years, and I also felt a belief in a democratic future for Russia.”

But, he noted, “Unfortunately, that belief has again disappeared.”

Charged in 1996 with these two crimes that could have brought the death penalty for his contribution to a chapter on Soviet and Russia nuclear submarine accidents and radiation levels in a Bellona report called “The Russian Northern Fleet: Sources of Radioactive Contamination,” Nikitin was arrested and spent the next five years trying to clear his name in the newly democratic Russia.

Arrested in St. Petersburg in February 1996, he spent many of those months just trying to gain access to human rights Lawyer Yury Schmidt. The FSB fought back, demanding that Nikitin take their lawyer, which would have written his conviction in stone. Schmidt was finally granted access to his client by the Supreme Court.

In December that year, Nikitin was release from FSB custody on the condition that he not leave the city. But that was only the beginning.

His case wended its way through 80 hearings in lower courts. Many of the charges against him were based on secret military decrees that not even his lawyer was allowed to review, and were, in any case, revived from Soviet times and applied retroactively.

Yet the battle was joined by Bellona, other Russian legal and human rights activists, and became a lightning rod for international pressure on the administration of Boris Yeltsin.

In December 1999, the City Court of St. Petersburg returned a verdict of not guilty.

The prosecution immediately filed an appeal with the Presidium of the Supreme Court – and the Presidium rejected that appeal on September 13 2000, making Nikitin the only person in the history of the USSR and Russia to have won a case against the FSB/KGB system.

As Nikitin reflects today on this time a decade a go, he sees both a silver lining in the storm clouds that have passed, yet also notices new ones that indicate he would never have been freed in today’s Russia.

The birth of environmental consciousness in Russia

“Before the case [against me] there were few who were engaged in ecological and human rights. The words “Ecological Rights” were seldom heard, and the problem of ecological rights were practically not discussed at all,” said Nikitin.

“Rarely someone would tie the right to life, the right to reliable information to the right to a favourable environment. After our case, things radically changed. Today, millions of Russians care in the first place about their right to clean land, to breath clean air and to drink clean water,” he said.

When asked why he thinks he is the only man to have ever beaten a rap with the FSB, Nikitin chalks it up to a sign of more open times in Russia following on the collapse of the Soviet Union.

When explaining how he won his case, he said, “Probably just by coincidence.”

“Truly, in the history of the USSR and Russia there were no cases in which a a person won a case in court against the FSB/KGB.,” Nikitin elaborated.

“I think, that [the victory in my case] was aided not just by my complete innocence, but by the situation in Russia, when the process of democratisation was underway and the huge attention given to this case,” he said.

A decade of backtracking on Russian reform

But the last decade’s open war from the Kremlin against civil society organizations – especially those dealing with human and environmental rights – led by former president, now prime minister, Vladimir Putin, a former career KGB officer in Germany, has eroded those democratically oriented advances that the victory in Nikitn’s case for a time spurred.

As a result Nikitin doesn’t think that if his case were to occur in today’s Russia that he would walk away with the verdict of innocent he achieved in 2000.

But Nikitin still has the desire to fight on. He continues to work at the chairman of the Environmental Rights Centre Bellona, Bellona’s St. Petersburg office, which he founded immediately after his freedom from FSB detention and subsequent to winning the Goldman Prize, the most prestigious award granted to environmentalists.

The office is today staffed with more than a dozen Russian legal and environmental experts and journalists. Nikitin is also stationed in Oslo were he daily takes part in guiding the operations of Bellona’s Russia Department.