The European Court on Human Rights has started to examine the application filed by Aleksandr Nikitin against Russia for not having finalised the criminal case against him within reasonable time. 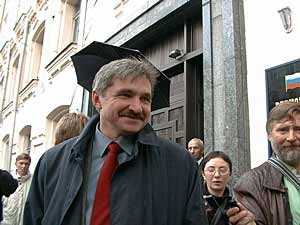 On October 8, the European Court on Human Rights in Strasbourg started its examination of the application filed by Aleksandr Nikitin against Russia.

The application (50178/99) was filed in July 1999. It claims that Nikitin’s rights under Articles 6 (1) and 13 of the European Convention on Human Rights to have the criminal charges against him determined "within a reasonable time", and to an "effective remedy" against this alleged violation, were violated.

Much to answer for
The Strasbourg Court has under Rule 54 § 2 (b) of the Rules of Court invited the Russian Government to submit its written observations on the admissibility and merits of the case within January 15, 2003. Based on Nikitin’s application, the Court asks:

· Has the length of the proceedings extended a reasonable time within the meaning of Article 6 (1) of the Convention?

· Did the applicant have an effective remedy for the alleged unreasonableness of the delayed proceedings, as required by Article 13 of the Convention?

Particular attention
Besides, the Strasbourg Court has paid particular attention to the fact that the Russian Prosecutor General – after Nikitin was acquitted by the Supreme Court – made an attempt to re-open the case. On the basis of these actions the Court asks:

· Was the Prosecutor General’s extraordinary appeal to the Presidium of the Supreme Court of May 30, 2000 compatible with the guarantees of a fair hearing under Article 6 (1) of the Convention?

· If the aim of the extraordinary appeal was to re-open the case, what fundamental defects were in issue?

The Court also invites the Government to comment on whether or not the Presidium’s consideration of the case could constitute violations of Articles 4 (1) and (2) of Protocol 7 to the Convention. The former provision protects the individual against twice being tried for the same offence, while the latter limits the authorities’ possibilities to re-open a case.

On these issues the Strasbourg Court actually goes further than Nikitin’s attorneys have done in their correspondence with the Court following the original application.

After having received the comments from the Russian Government, the Court will invite Mr. Nikitin and his representatives to submit their observations in reply to the Government. Based on this material, the Court will decide how to handle the case further. Because of its huge workload there is little reason to believe that there will be a decision on the merits before in 2004.

Nikitin case history
Aleksandr K. Nikitin, a former submarine officer and nuclear safety inspector turned environmentalist, started to co-operate with Bellona in 1994. He was first charged on October 5, 1995 when the Russian Security Police (the FSB) confiscated his passport. He was arrested in February 1996 and charged with treason through espionage for his contributions to a Bellona report on the nuclear safety within the Russian Northern Fleet. He spent 10 months in pre-trial detention in St. Petersburg before being released on the order of Mikhail Katushev, the then deputy Russian Prosecutor General, in December 1996.

The charges were however, not dropped. Nikitin first stood trial in October 1998, when the St. Petersburg City Court, rejected the evidence against him. But rather than acquitting him, the Court stopped the trial and sent the case back to the FSB for additional investigation. The Russian Supreme Court confirmed this decision in February 1999, and the FSB filed new charges against Nikitin in July 1999.

The second trial started at the St. Petersburg City Court in November 1999, and ended on December 29 with a full acquittal. The prosecution appealed to the Supreme Court, but the acquittal was confirmed and reached legal force on April 17, 2000.

The Prosecution was, however, not willing to call it a day. On May 30, 2000 the Prosecutor General requested the governing body of the Russian Supreme Court, the Presidium, to re-open the case. The basis for the request was that "Nikitin’s rights had been violated throughout the proceedings against him, and that these violations had to be repaired" (sic).

The Presidium rejected the request on September 13, 2000. Thus, 4 years, 11 months and 8 days after Nikitin was first charged (of which 2 years 4 months and 9 days took place after Russia ratified the European Convention on May 5, 1998), the acquittal was made final.

Aleksandr Nikitin is still engaged in environmental and human rights issues in Russia. He is the head of the St. Petersburg based organisation "the Environmental Rights Centre, Bellona" (ERC Bellona). The organisation is engaged in environmental and nuclear safety projects, as well as in several human rights cases, most notably the case of Grigory Pasko, a Russian journalist who was convicted to four years for treason on the basis of charges quite similar to those Nikitin was acquitted for.

Nikitin’s application to the European Court on Human Rights is available from the box at right.