Another law in the military

Two witnesses were heard in Court today. They both acted in favour of the defence, although one was the FSB key witness who did not show up yesterday.

Published on December 7, 1999 by Runar Forseth 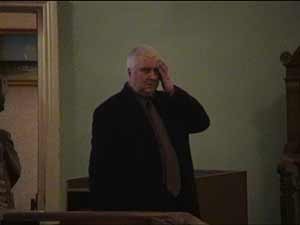 Third week of the Nikitin trial

“The preparations we made on Sunday were not wasted,” said Yury Schmidt as the Court finished today. Oleg Leykin, the FSB witness that failed to show yesterday, appeared today. He was expected to be difficult to handle by the defence, but that threat did not materialise.


“Ibadulayev made a fine impression,” said Schmidt. He had confirmed that Nikitin had been interested in open information, such as how to calculate the amount of radioactivity from spent nuclear fuel. Such information is open, he had testified.

Prosecutor Gutsan had asked why Nikitin, a former radiation safety expert himself, needed help on this. Ibadulayev had explained that Nikitin mostly worked with operational issues, not the consequences.


Ibadulayev also confirmed that questions of secrecy were always settled by consulting the decrees from the Ministry of Defence.

Yesterday, Nikitin said he thought the reason why Oleg Leykin did not show at Court was that the prosecution wanted to prime him thoroughly. This now seems unlikely.


“Leykin seemed confused,” said Aleksandr Nikitin. “Maybe his part in the case only was to sign papers sent to him. He didn’t show any deep knowledge about the case.”


Surprisingly, the prosecutor had only asked Leykin simple questions. There came nothing forth to strengthen the prosecution. “So Leykin was a good witness for us,” commented Schmidt.


Leykin has been used both as a specialist participating in the investigation, and as an outside expert at various stages of the case. This conflicts with the law, in actuality rendering the expert assessments void.


“In 1997, we pointed this out in a petition to the Supreme Court,” said Yury Schmidt. “We concluded that there had been no valid expert assessments in the case, and that this left the investigation without any legal evidence. The investigation had so far failed to heed any of the orders it received from the legal system.”


The Supreme Court decided that the expert commissions had indeed been illegal. “When he decided to use Leykin as a witness, rather than a specialist, Gutsan created a legal collision. This he admitted in Court today” said Schmidt.


The Court realised this point today, and did not go into details about the damage assessment Leykin was expected to defend (see yesterday’s article on the missing witness). It did, however, discuss the matter of state secrets with him.


Another law for the military

Asked by the defence, Leykin had named precisely the documents that are referred to when determining whether an issue pertains to state secrets. “He would have avoided such details if he was well prepared,” said Schmidt. Leykin had added that there was ‘no stupidity in the decrees from the Ministry of Defence’.


“Something very interesting came up,” continued Schmidt. “Leykin said they always refer to the decrees of the Ministry of Defence, as they have always done. No law not defined by the Ministry is ever referred to,” said Schmidt, who would not disclose Leykin’s place of work. “That is a state secret.”


So, the military is run by its own laws, not heeding those given by the State Duma or other civilian institutions.


As expected, Leykin had testified that all the information in sub-chapter 2.3.3 is secret.


“It was good that the Court noticed our point on Leykin’s double role. In sum, we were satisfied with Leykin’s performance.”


Press conference and briefing on Thursday

There will be a press conference/briefing at 14:30 at the upcoming Thursday, at the House of Journalists, Nevsky Prospect 70. In addition to a general update on the case, the defenders want to give some answers to the challenge from TV Petersburg. The local TV station is running a debased smear campaign against Nikitin, in a TV series dubbed ‘Tracing Bellona’. Presenting pure FSB propaganda and fabricated ‘facts’, the series is disguised as a documentary.