BETWEEN GRAND ISLE AND COCODRIE, Louisiana – A community centre on Louisiana’s highway one, running deep into the bayous – the land most threatened by the creeping BP oil spill in the Gulf of Mexico – plays host to a group giving out small business loans and a “BP Information Centre.” 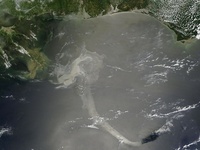 After a night spent inhaling crude and chemical smelling toxic fumes blowing off the Gulf, Bellona Web has counted a dozen tar balls –black and oily and as big as Frisbees some 30 to 40 centimetres across  – that have washed up on the beach down the road. By morning, the smell of oil hanging in the air above the sun-baked bayous has also been augmented by the putrefaction of decomposing sea life.

At the community centre, representatives of American’s Small Business Administration explain the terms of 30 year loans to motel owners, restaurateurs, and fishermen who will take the financial brunt of the Deepwater Horizion blowout, while a BP representative sits behind her table with a taciturn look, staring out at the beautiful day beyond the fluorescent lights and air conditioning of the lobby.

But she stirs truculently when approached by a reporter asking exactly what sort of information she has been giving out. “I can’t tell you,” she says. But the reporter has heard from BP higher ups that they have everything under control. Can’t she just confirm that?

“I can’t confirm anything. I have no comment,” she says, her voice rising. She stands and walks away from her table. Moments later she reappears with a police officer who asks Bellona Web to leave the building. The officer says to talk to area BP PR chief Guy Rozas, who can be found at town hall. 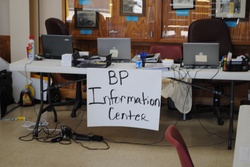 After several messages, nether Lips nor Rozas returned calls. A Town Hall official formally apologized for the police intervention at the community centre, but said, “What can you do? We don’t control this community now, they (the oil companies) do.”

In remarks prepared for congressional testimony, National Wildlife Federation President Larry Schweiger says BP is keeping too much information from the public.

The BP “temporary employee,” is just one tiny brick in a dam that controls –  in collusion with local academics and even federal authorities – the flow of information, and disinformation, about the spill. The constipation of comment is creating a blackwash of chaos in trying to track down precise estimates of what kind of damage awaits the Gulf of Mexico when BP gets around to plugging the well that has been leaking 5,000 to 60,000 barrels of oil a day since April 20.

Other journalists and local citizens report similar problems in trying to get a straight answer out of BP, which is responsible for cleaning up the growing oil slick that erupted after the BP-operated Deepwater Horizon rig exploded 29 days ago. 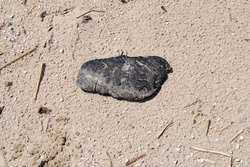 A CBS news camera crew that was trying to reach the oily waters on Louisiana’s coastline yesterday afternoon was stopped by a vessel of unknown provenance and told to turn back or face arrest by several Coast Guard and BP representatives on board. On camera, the skipper of the boat told the news crew: “These are BP’s rules. These are not our rules.”

BP has been pressured numerous times by Senators to release more information about the spill. The response was four short videos taken from the sea floor. Yet the new footage shows a far more out of control geyser than did previous footage, leaving suspicions that previous videos had been edited

BP has refused to do better air monitoring. It has refused to release air samplings for cleanup workers. The Occupational Safety and Health Administration (OSHA), which monitors compliance with worker safety standards, has been relying on information from BP.

“The information is not ours to publish,” said Dean Wingo, OSHA’s assistant regional administrator who oversees Louisiana. “(We are) working with (BP) and encouraging them to publish the data so that it is publicly available.”

Much of the worker health information is being collected by subcontractors of BP. Toby Odone, a BP spokesman, said BP is sharing the data with “legitimate, interested parties” which include government agencies and companies participating in the cleanup.

When asked whether the information could be released publicly, he replied: “Why would one do it? Any parties with a legitimate interest can have access to it.”

‘Out of sight’ out of mind

“(Oil companies) want to make the visible part of the oil spill disappear – for political reasons, for limiting liability to the spillers,” said Richard Charter, government relations consultant and oil drilling expert for the Defender’s of Wildlife action fund, referring to BPs unprecedented use of some 600,0000 gallons of the highly toxic Corexit oil dispersant, which has been banned in the UK.

“If we were looking at food chain impacts, and biomagnification in the marine ecosystem, we probably never would have invented Corexit,” he said.

Indeed, the dispersant, which is now warranting further investigation from the Environmental Protection Agency (EPA), causes oil to sink, keeping it “out of sight” according to Mississippi Congressman Gene Taylor, who admitted to having no special knowledge of dispersants or their effects, but expressed concerns about their long term effects.

Appearing before a Senate panel on Tuesday, EPA head Lisa Jackson acknowledged the environmental concerns surrounding dispersants, but said she has been “hesitant to take it out of the tool kit all together.”

The agency, she said, is “working with BP and others to get less toxic dispersants to the site as quickly as possible,” and is “still looking into” why Corexit was banned in the UK. The EPA will review its policies for evaluating dispersants, she said, adding, “I’m amazed by how little science there is on the issue.”

But how long can the secret of the spill’s magnitude be contained? How long can information on the spill be micromanaged by the Coast Guard, Halliburton and BP?

The Coast Guard Tuesday expanded the area in the gulf where fishing is prohibited by three times, bringing the total amount of the Gulf of Mexico that is off limits to fishermen to 19 percent. 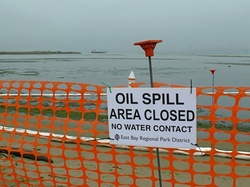 The request may now be moot; oil has already penetrated the marshlands and bayous despite over 1 million miles of floating booms surrounding them.  As of Tuesday night, 29 miles of Louisiana coastland had been hit by oil.

Bellona Web observed and photographed oil sludge, or mousse as deepwaterhorizonresponse.com has called it, coagulating in the marshlands surrounding Elmer Island. Further out on the beach, a the local sheriff’s department was guiding a colossal effort to move some 40 tons of granite rocks and sand down the beach, while dredgers worked off shore to build tide pools that may catch oil when it comes in.

While in the area of Elmer Island, Bellona Web was routinely harassed by local authorities. While travelling the bayous’ one lane back roads, white pick up trucks used by the Coast Guard and Halliburton and Humvees used by National Guard routinely tailgated at high speeds Bellona Web’s vehicle. When Bellona Web would pull over on narrow road shoulders to let the vehicles pass, they would then get in front of Bellona Web’s car and travel at a snail’s pace. 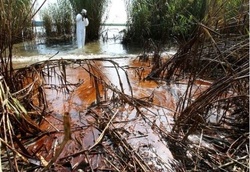 National Guard soldiers, police and cleanup workers from Halliburton and BP milled around Coco Marina on Little Cocotrie Bayou, where far out on piers boats were loaded with sandbags and floating oil booms. At the same time, other boats were unloading dead fish and sea life. The backs of these vessels were draped with huge rubber tarpaulins and their contents unloaded onto enormous trash trucks, which pulled the stench of decaying sea life with them out of the marina.

Wildlife issues – are animals dying or not?

Three workers who had gathered in the shade under the marina’s closed restaurant took off their hard hats and wiped sweat from their brows with the kerchiefs that had covered their mouths and noses. When asked if they had been pulling dead fish from the bayou, one said, “What do you think that smells like? You bet it’s fish.” 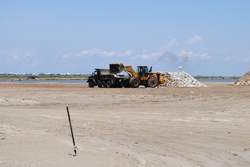 But scientists at Gulf universities and oceanographic institutes have been extremely quick to dismiss any connection between the spill, the dispersants and animal death in local media interviews, saying the mounting death toll of wildlife is related to viruses, boating accidents – anything but the spill itself.

“It’s not just fish that we are taking off to the dump,” said the worker. “There’s animals bigger than fish in those trucks. No wonder the feds cant’s say how much of what is dead,” he said.

Meanwhile, groups that have been called in to verify sea life casualties have routinely been turned away from the sites where they may find dead wildlife.

The International Bird Rescue Research Centre, which was hired by Tri-State Bird Rescue and Research, Inc on behalf of BP, has complained of an overly bureaucratic process that hinders their access to federally managed areas to look for injured birds.

Testing fish – the nose knows as well as grandma does

Forty percent of fish harvested in the continental 48 states come from the Gulf. Government officials and fishermen are working together to sort the contaminated seafood from the untouched seafood.

Testing includes daily laboratory samples and – incredibly – the use of so-called “sniffers” — people trained to detect the presence of oil in seafood by using their noses.

“The human nose is actually the best oil detection tool we have available,” LuAnn White of the Tulane University Center for Applied Environmental Public Health said. “It’s like your grandmother told you — ‘If it doesn’t smell good, don’t eat it.’ “