In a sweeping vote, the Russian State Duma approved on the first of four mandatory readings an initiative that will severely tighten regulations governing non-governmental organisations (NGOs) operating in Russia, requiring that they register with the state or risk losing all of their funding.

Published on November 23, 2005 by Charles Digges 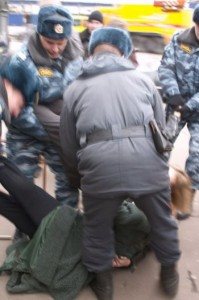 The bill, which has to pass two more readings, would also bar foreign NGOs from having representative offices or branches in Russia unless they registered as Russian legal entities. It would also restrict Russian NGOs’ ability to accept foreign cash or employ non-Russian workers.

A small protest outside the Duma was also forcefully dispersed by police and led to three arrests.

The Duma also passed the fourth and last reading of an initiative that—ironically at first glance—would infuse the civil society sector in Russia with $17.5 million. But NGO activists and the handful of dissenting Duma members view the initiative as a measure to more tightly leash the NGO community by putting it under the Kremlinï¿½s wing.

Not a single unified party faction voted against the measures. The lone dissenters were exclusively independent Deputies not affiliated with the juggernaut of United Russia, the Dumaï¿½s majority party that is openly accommodating to President Vladimir Putin and the Kremlin. The second reading of the bill is scheduled for early December, Radio Ekho Moskvy reported.

Protestors and journalists were also roughly handled by police when they arrived to report and protest on the result of the Duma vote, showing the government’s stalwart objection to giving a voice to civil society in Russia.

If the current bill is passed into law, the country’s 450,000 NGOs will be forced to reregister with the Justice Ministry’s Federal Registration Service under the tighter rules next year.

"This bill contradicts the primary principles of democracy and fundamental human rights. The shocking fact is that the State Duma would even consider something like this," said Bellona President Frederic Hauge. The Oslo-based Bellona has two locally registered offices in St. Petersburg and Murmansk.

"This is one more proof of how important it is to build a civil society in Russia that is able to defend the rights of the people," said Hauge.

"If this bill passes, the law will become a hindrance to not only the work of certain NGOs, but will impair cooperation between regions such as the Barents Sea region in Northwest Russia, the Northern provinces of Finland, Sweden and Norway."

At issue is an initiative introduced by United Russia last month that would severely curb the activity of NGOs—both foreign and domestic—from working in Russia. The bill stipulates that all NGOs must be registered with the government. If they fail to do so upon the lawsï¿½ passage, they will be blocked from receiving any funding, either foreign or domestic.

Registration officials would supervise the financial flows and taxes of NGOs and determine whether their activities were in accordance to the law and to the NGOs’ declared goals. 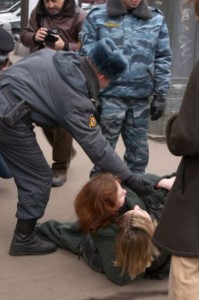 Activists and journalists roughed up and arrested by police
As the initiatives sailed through the Duma, a small protest of some 10 activists from the environmental organisations Ekozashchita! and Groza found themselves confronted by a heavy police force, according to Alisa Nikulina, an activist with Ekozashchita!. A contingent of local media were also present.

In Nikulinas recounting of events, the police seemed to be waiting for the unsanctioned protest that her organization brought. They held banners reading We forbid you to forbid and Freedom to civil associations. Her group and journalists who had come to cover the vote were blocked by police barriers approximately half a block from the Duma.

When journalists began to protest the block out, the OMON—Russias tactical police squad, akin to US swat teams—was called in. Other activists witnessed one journalist being thrown to the ground by an OMON officer and threatened with a beating if he didnt back away from the barrier police had erected. They said the reporter was told by the OMON officer you have no right to be here.

Activists fared somewhat worse, said Nikulina. In an interview with Bellona Web from Moscow at about 3pm local time, she said some five activists—3 from Ekozashchita! and two from Groza had been detained within 15 minutes of the beginning of the protest for allegedly assaulting and verbally abusing police officers. This, even though Nikulina said she and her group were peacefully protesting the vote in the Duma and were staying out of the way of the work of the police as much as possible.

Nikulina said she was dumbfounded by such a strong police presence and reaction and said it just looked like they wanted to knock anyone down. According to Bellona reporters in Moscow, the activists were first taken to a local police station where they were harassed for three hours, and then transferred to a Moscow court. None had been injured. Three of them received three-day jail sentences for violating a Russian law on disrespection police officers.

Civil disobedience
Ekozasshchita! has six offices in Russia, 4 of which are registered. Yesterday, organisation Co-chairman Vladimir Slivyak said he would not register the two remaining offices as an act of civil disobedience.

Nikulina said Wednesday that she hopes that the surprising ambush outside the Duma today will lead to a wider consciousness of the NGO laws, which she said the average Russian grasps poorly.

We want people to realize how this will effect their lives directly and not as just another rubber stamp from the Duma, she said.