Finally after 1.5 years since his release the whistle-blowing journalist has been allowed to travel abroad and visit his overseas supporters.

Published on July 2, 2004 by Vladislav Nikifоrov 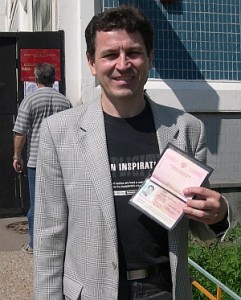 On June 30, Grigory Pasko received a telephone call on his mobile phone from the director of the local passport department who asked the journalist: Why dont you, Grigory Mikhaylovich, pick up your international passport, its been here for a long!.How long? asked Pasko. Whole day already the director said.

Pasko filed all the necessary documents for an international passport back in April last year, and anticipating it would be ready within the legal time frame of one month, he was preparing to visit Bellonas central office in Oslowhich organized his defence at his last trialat the beginning of May.

But it was not until July 8, 2003,four months after he filed his applicationthat Pasko received official notice that his request had been turned down by office No. 3 of the Visas and Registration Department of Moscows South-Eastern District, a local branch of Russian police-controlled international passport and immigration authority known by its Russian acronym as OVIR.

Later Grigory appealed this decision in the Moscows Lyublino District Court which rejected the appeal.

According to Paskos lawyer, Ivan Pavlov, OVIR based its decision not to issue the international passport on some order of 1998, signed by the chief of one of Moscow’s police precincts. The order stated that release on parole is not a complete release from the sentence. A person’s rights can only be limited by law, not by an order by some minor bureaucrat, who in this case is not even a minister and not even the head of the Moscow police. The order is not a normative act and is unacceptable in this case, said Pavlov. According to Article 79 of the Russian Criminal Code, release on parole is one the types of release from punishment, therefore it cannot limit the right to travel outside the Russian Federation.

On August 20, 2003, the Moscow City Court upheld the ruling of a lower district court which one month before had denied the appeal of prominent environmental journalist and whistleblower Grigory Pasko to have his international passport reinstated.

The long-lasting fight for Grigory Paskos right for international passport is over. This is a small but very useful victory for all environmental and human rights movement in Russia.