ST PETERSBURG—It darkens early in the northern Russian town of Naryan-Mar nowadays. At 9:00 pm, when she was approaching the doorway of her home, they were already waiting for her. Three unknown men asked in low tones and very quietly: “Olga Petrovna?” They made sure they had the right victim. Then, they started to beat her savagely in the dark…

Published on November 5, 2003 by Rashid Alimov 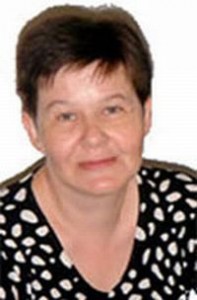 For the past year Olga Petrovna Krupeniye has been working as a press-secretary for the head of the administration of the Nenets Autonomous Region, or NAR, and she could be easily have been taken home each evening by an administration car. But she prefers to go home by foot. We don’t doubt that this fact was known to those who waited for her that October night.

On Saturday, information agencies reported that "the victim, with a cranial cerebral injury, was taken to the casualty ward of the Nenets region hospital."

"Krupeniye received a closed craniocerebral injury, a concussion, and multiple haematomas. According to the preliminary investigative version, the assault is connected with Krupeniye’s professional activities, who also heads the local newspaper Naryana Vynder, or Red Tundra Dweller, these agencies reported.

Threats followed Krupeniye
We called Krupeniye, when we learned about what happened. She hasn’t recovered from the assault yet, but tried to sound up-beat: "Now I have a face of a vagabond with smashed lips… but it hurts when I speak." When we asked her if she has any idea about who could have it perpetrated the assault, she said that "recently I have prepared a lot of biting reports for newspapers, tv, and web-sites about local members of the State Duma, as well as about the federal Russian government."

In NAR, there are people for whom Krupeniye’s departure would be a joy. But Krupeniye thinks that the assault was aimed not at her, but at her patron, Nenets Autonomous Regional Governor Vladimir Butov, and is connected with the election campaigns that have recently begun: "I came here with a team of journalists from St Petersburg. So to threaten me and make me leave is to break his Butov’s plans," she said.


Bellona reporters stand by ground-breaking journalist who defended the NAR
To put it more precisely, our editorial staff are not interested in Butov’s career. But we, as well as Krupeniye,—and being a journalist defined the character of her work—decided that it is our common duty to raise our voices in defence of the rights of the Nenets natives to follow their traditional way of life and management of nature.

The right to a traditional way of life is not only a part of an autonomous regions’ right to a safe environment—it is an essential to the integrity of its inhabitant’s lives. Now that their traditional areas have been moved to the outskirts of big cities, the natives lose purpose of living as a people.

Russian federal law "On the Guarantees of the Rights of Indigenous National Minorities of the Russian Federation," issued on April 30th 1999, has cemented these rights. Among them the right to "hold, free of charge, and use in the places of traditional settlements lands of different categories, needed for traditional management and traditional crafts." Another law, "On the Territories of Traditional Nature Management of the Indigenous National Minorities of the North, Siberia and the Far East of the Russian Federation," issued on May 7th 2001, which guarantees protection of the native habitat and the traditional way of life for those minorities, and the preservation of the biodiversity in these areas.

But what actually happens in NAR? We learned about that from the messages from Krupeniye, her colleagues and friends. It’s because of Krupeniye and her colleagues that NAR has been held our rapt attention. She is very different from the legions of press-secretaries who succeed in limiting their work to writing the speeches for their patrons.

Novaya Zemlya nuke test ground destroyed livelihood of NAR
Fifty years ago, the Soviet Government created its main range for testing nuclear weapons on the Arctic archipelago of Novaya Zemlya. From that time, Edey Ya, as the Nenets call this territory, has become the most closed and secret territories in Russia.

Ninety four percent of all nuclear explosions, which took place in the former Soviet Union, took place on Novaya Zemlya. As a result, many people who live there are seriously ill. And the main cause of their diseases is the destruction of the biosphere. Over the course of 40 years, 132 nuclear explosions rocked the area.

The beautiful cultural and historical monument has come to be known as the "archipelago of death." In the magazine Environment and Rights, which is published by the Environmental Rights Center "Bellona" in Russian in St Petersburg, we posted an article Edey Ya—the Land of Our Concern, written by Irina Khanzerova, a journalist from Krupeniye’s Naryan Vynder newspaper.

According to the Siberian branch of the Russian Academy of Sciences, many inhabitants of the NAR have chromosomal diseases—even the children born after 1990, when nuclear tests at the Novaya Zemlya archipelago were stopped. This means chromosomal diseases are heritable and passed from parent to child. According to the same data, caesium concentrations in the soil, reindeer moss and deer meat in several areas of NAR even today exceed the norms.

We published this information in the second issue of Environment and Rights, in the article entitled "A Prisoner of the Novaya Zemlya," which described the biography of a participant of the nuclear tests. The medical statistics of the Soviet times intentionally omitted diseases caused by the nuclear industry—either military or so-called peaceful one, energy-producing applications.

People exposed to radiation during nuclear tests were officially forbidden to tell anyone why they were ill. The state showed no interest in them. To classify the incidents of disease as secret in order to forget them was the Soviet’ favoured method of dealing with the problem. In August 2001, ten years after the declassification of information on Soviet nuclear tests held on the Novaya Zemlya Islands, Luka Gorbatov was at last officially declared a participant of the tests. Only after ten years of his active protests did the state admit that Luka Gorbatov suffered from radiation exposure.

Krupeniye’s contribution to Bellona
In the issue 4/5 of Environment and Rights we published an article entitled "Lukoil comes to the tundra," which was an interview with a member of Nenets Autonomous Region Parliament Alexander Vyucheysky. He told our magazine about relations between the oil industry and deer-breeders of the Nenets tundra. He said that Lukoil has to pay compensations to deer-breeders for building oil platforms because, according to the Earth Code, deer-breeders are tenants at will of the tundra. But Lukoil hasn’t yet paid a kopek and ignores environmental safety requirements, ignores the welfare of the land it came to work on—as well as the Nenets people, who had been living there for centuries.

When something significant happens in the NAR we learn about it from Krupeniye. In July we wrote about a pipeline blow-out, which resulted in a 150-cubic-metre spill that progressed into the the Kolva and Sandivei rivers of the NAR. It was she who sent us information about the incident, complete with the photos of the river Kolva covered with 70 kilometres of black film. At the time Krupeniye sent us the information, the cleanup efforts had only were just begun—though the blow-out happened several days earlier. The owner of the pipeline, Severnoye Siyanie, according to sources closely connected with Russian oil giant Lukoil, tried to cover up the spill.

Leakage from pipelines are not rare in the modern Russia, including those caused by oil poachers, who shoot, cut, or drill holes in pipelines and collect the leakage to sell. But the main reason behind the leakages is that the companies try to save money and don’t spend it on "enviro-protection."

The cleanup efforts on the spill Krupeniye reported to us took more than three months. In the beginning of October, Krupeniye reported us that cleansing the territory is almost completed, but floating booms to contain and absorb the spread of the oil on the rivers will remain until the rivers will be covered ice over. She also said that during the period of rains, the water level in the rivers may increase, and oil left on the banks may be washed the rivers’ waters. At the same time, Sergei Fyodorov, head of the NAR Natural Resources Department—a branch of the federal Emergency Situations Ministry—estimated the sum of damage from the spill to be almost $666,000. 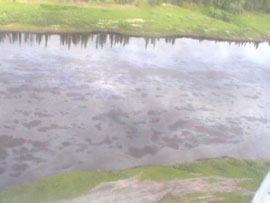 "I haven’t become a peaceful Naryan-Mar dweller," Krupeniye said wryly at the end of our telephone conversation.

Fearless in the face of danger
From out experience we can add that she has never been a peaceful dweller. In the mid-90s Krupeniye worked at the Russian news agency Interfax in Uzbekistan. Born and raised in Tashkent—her Russian grand-father had gone there to build a railway there decades ago—she had to flee the city after the killing of one of Interfax’s reporters was killed there, and she herself was pursued with threats.

Interfax transferred her to St Petersburg and for several years, she was the head of the Northwest branch of Interfax. When Russian democratic Duma Deputy Galina Starovoitova was murdered, Krupeniye was the first journalist on the scene of the murder, Starovoitova’s residence on Griboedov canal. Ruslan Linkov, the gravely wound aide of Starovoitova called Krupeniye when police could not understand what he was trying to report to them from his mobile phone.

Krupeniye called for medical help, saving Linkovs life. Linkov knew that Krupeniye could be relied on to come and help.

Krupeniye held the most the most incisive press-conferences at Interfax’s St Petersburg bureau, and those reporters who worked in this branch have always been the most professional and informed among interfax’s reporters. But about a year ago Olga Krupeniye left for NAR.

Besides her journalistic credentials, Krupeniye is a member of the Union of Writers. She can write not only informative reports, but also has a very special, honest and accurate pen. To write about a hospital for lepers, she goes there to see it first hand—something few journalists would have the courage to do. But she did.

Such journalists are an honour to our profession, and we wish her a successful and complete recovery.