This past October is bound to stick in memory for many of usour environmental front was as sprightly as ever. And in that new vivacity, no one surpassed the Ministry of Atomic Energy, or Minatom, with their mass-scale conferences. 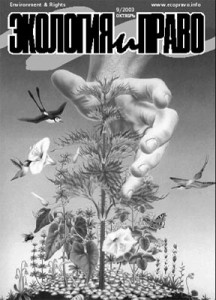 The Snarling Dogs that We Unleash

One of them, for instance, dealt with this new phenomenon in our life: informational terrorism (the biggest credit for which Minatom naturally reserved for the media). Another discussion was about ways to spot the true environmentalists. Needless to say, Minatom counted themselves as members of that club. As for the pseudoenvironmentalists, one member of the State Duma, and an academician of the Russian Academy of Sciences at that, gave them a definition of academic simplicity: he called them stinking green bastards. There you go, thats how real men talk. This must be some new way to tell between the real sons of the environmental movement and the illegitimate offspring. A DNA test, though, would tell a lot about where those true environmentalists came from.

On a general note, the present times are sadly dull. For everythingor almost everythingis too easy to predict. No one gets surprised by anything anymore: not by former KGB spooks teeming on the sweeter governmental pastures; not by the crimes committed by judges and prosecutors, whose impunity would make a hardened felon greenno pun intendedwith envy; not by the fact that the country is ruled by a non-elected president In fact, all of the above rely on none other than the president as guarantor of their comfortable existence.

From time to time, I find I like the open cynicism of what this president says. In late September, for instance, when asked, during a visit to New Yorks Columbia University, if it was true that freedom of speech was oppressed in Russia, he saidand note the amazing elegance of his answerHow do you oppress something that does not exist? Wow, that was a powerful one. Just like that thing he said so plainly sometime back in 1999, about what scum our security services are today: Like the people, like the KGB. At Columbia, the president was being a more careful speaker: they shouldnt poke their noses into civil society He could have easily continued to that effect that seeing as there is no civil society in Russia, the poking of the KGB noses into every bit of Russians lives and activities is all but normal.

And theres no arguing with that. Especially in sight of the results of certain recent elections. Valentina Matviyenko has got elected as St. Petersburgs governorsurely, no ballot box stuffing was needed. No tempering with votes was likely necessary when those who watched a televised debate between Irina Khakamada and Vladimir Zhirinovsky called in their support for the latter, the frenzied leader of Russias infamous nationalist LDPR party. No illusions about our majority, folks. They wont start thinking about ecology or human rights until it walks up and bites this majority on the ass.

Recently, I was in Vladivostok. The absence of cold and hot water in the city apparently left no one indifferent. Everyone is abuzz about the inaction of authorities of all stripes. But I will bet that at the next election this indignant majority will again vote for the incumbent governor and mayor. And not just because the governor and mayor bought out practically all the media in the region. The thing is there is no opposition in sight. The independent media included. Why are these local midget tyrants being so brazen? Because they have a good teacher above. Someone whose steps to follow.

Meanwhile, environmentalists are debating whether we need an ecological party. Their cons: no money; we wont overcome anyway; we dont want to be like them; we can do more where we are right now The pros are in minority: we can do jack all where we are right now. In a way, both are in the right. But as a result, those at the helm pay no attention to either. At times, yes, the authorities do remember them, when they need to show the West that Russia has a civil society. And then ecologists lament they have no true supporters in legislative bodies. You could lament like this for a million years. Is it maybe easier and wiser to make sure some of your own kin get to work in these bodies?

Of course, its not all so bad. Environmentalists and human rights advocates have really started to hook up. Those conferences in October come as proof of that. I think that the birth of the civil society in Russia will begin precisely with a real unification of these two branches of non-governmental institutions. To my great regret, though, I cant count the huge army of my colleaguesjournalistsamong their allies.

So what it all boils down to iswe have to live on. And fight, if need be. Or else these pit bulls straining at their chains wont just bite us, theyll swallow us whole. The future of our children in our country is in our hands. But it is us, too, who need to fight for that future. Including getting up for a political wake-up call. Including showing civil activism. Including realizing that we are people who not only can, but must do at least something that would stave off the brazenness and cowardice of the powers that bethat, for various reasons, we let be today.