While Moscow courts refuse to consider a suit brought by the Environmental Rights Center Bellona against the Russian Navys Chief of Staff Vladimir Kuroyedov, demanding that the data about accidents aboard Russian nuclear submarines be declassified, Bellona has upped the stakes by submitting a new complaint to the Russian Supreme Court.

Published on September 19, 2003 by Rashid Alimov 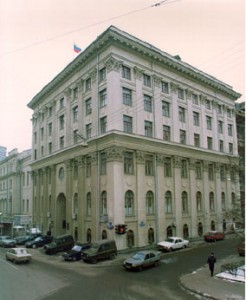 Bellona lawyers hope that the complaintwhich deals with the Russian Navy and Ministry of Defences refusal to disclose information about accidents on Soviet nuclear submarinesto the Supreme Court will settle, once and for all, which court will get the case.

The original complaint was submitted in February of this year to the Moscow Presnya District Court, which has territorial jurisdiction over cases involving the Defence Ministry. The case, however, was rejected by the court, which said in its decision that cases concerning state secrets must be considered at the Moscow City Court.

Bellona lawyers objected to that decision, saying that the Defence Ministry had not proved that the case involved any state secrets.

Having accepted thisin our opinionillegal position to uphold the district courts decision from the Moscow City Court, we were forced to file our complaint against the navys chief of staff to provide submarine accident information in the Moscow City Court, said Alexei Pavlov, a lawyer with the Environmental Rights Center Bellona, or ERC Bellona, Bellonas office in St. Petersburg, Russia.

But then, on August 28th, the Moscow City Court suddenly refused to consider the complaint and came out with a decision saying the complaint of the ERC Bellona cannot be legally considered by the court of a city of federal significance. Simply put, the Moscow City Court was volleying the case back to the district, or non-federal, court, locking the vicious legal circle.

That second decision once again uncannily coincided with another one of the submarine disasters that the Defence Ministry is fighting so hard to keep under wraps. On August 28, the decommissioned K-159 left Gremikha Bay on the Barents Sea, towed by a tugboat, for dismantlement in the north of the Kola Peninsula. Two days later, the K-159 sank in what the navy said was a violent storm that tore away the pontoons keeping it afloat, killing nine of the 10 crew members aboard.

In the days following the accident, the navy revised its story several times, beginning with when the boat actually sank, the depth to which it sank, to whether the crew died fighting a leak that sank the vessel, instead of the reported storm. It is still unclear what shipyard the K-159 was being towed toNerpa, which falls under the jurisdiction of the Russian Shipbuilding Agency, or Polyarny, a Defence Ministry installation. After a series of high-profile suspensions among Northern Fleet brass carried out by Kuroyedov, the Russian Navy seems content to hide the facts of the case behind a series of slippery half-truths.

The fact that we are right is obvious. The courts simply dont want to get mixed up in a case that would not be heard in the Ministry of Defences favour, said Pavlov in an interview with Bellona Web.

The Moscow city court has simply got confused on the question of the jurisdiction of the case after we filed our complaint, and now it is issuing contradictory decisionssuch inconsistency in the rulings of the Moscow City Court is not only intolerable, its absurd, he added.

The History of the Complaint
The back-and-forth lobbing of the case between Moscows city and district courts began when ERC Bellona sent a letter in July of 2002 to Defence Minister Sergei Ivanov asking that he declassify information about accidents aboard 15 Soviet submarines that took place between 1961 and 1985an average of about one every two years.

The letter to Ivanov read, in part, that according to information that ERC Bellona has obtained from various open sources, the nuclear reactors of the nuclear submarines tactically numbered K-19, K-387, TK-208, K-279, K-447, K-508, K-209, K-210, K-216, K-316, K-462, K-38, K-37, K-371, and K-367 suffered at various times accidents and technical failures. It is known that as a result of these accidents, people suffered and radioactive emissions in the environment were registered. Despite this, the full results of these emergencies remain to this time concealed from the public.

These subs, which are laid up at Russian Northern Fleet bases, have been retired and await full dismantlementsome with their spent nuclear fuel still onboard. Others, like the infamous K-19, have been defuelled and are slated for destruction. Still others have been fully destroyedmostly with US threat reduction fundingand their spent nuclear fuel has been sent to the Mayak Chemical Combine in the Southern Urals for reprocessing.

Renowned environmentalist and ERC Bellona chairman, Alexander Nikitin, said in a recent interview that we have asked Defence Minister Ivanov to declassify the data about the radiation accidents in strict accordance with Russian legislation.

In November 2002, ERC Bellona received an official response to its inquiry on declassifying the submarine accidentsbut it did not come from Defence Minister Ivanov, to whom it was addressed. Instead, it came from none other than the Russian Navys Chief of Staff Vladimir Kuroyedov.

The navy is unaware of any open sources from which the information about accidents aboard nuclear submarines has been obtained, especially information enumerating the tactical numbers of the submarines, Kuroyevov wrote.

Bellona Lawyers determined that the refusal to grant the information, in and of itself, was illegal. Thus, in early 2003, ERC Bellona lodged the first of its several complaints to Moscows court system, which led to its latest rejection for review by the Moscow City Court.

Bellona Says Sub Accident Information Cannot Be Classified
Bellona lawyers pointed out in their letter to Kuroyedov and the Defence Ministry that Article 7 of the law On State Secrets provides that any information pertaining to civil emergencies and catastrophes that threaten the safety and health of the population; to natural disasters and official forecasts about disasters and their prospective consequences, as well as information about ecological conditions cannot be classified.

Kuroyedovs curt answerrunning only eight lines of textin which he denied knowledge of open information sources about the accidents aboard the enumerated submarines, admitted to only one calamity, the K-19, which would have been pointless to deny given its slickly produced Hollywood-borne fame. The script of K-19: The Widowmaker was largely hyped and dramatised, according to the K-19 survivors, who were treated to a pre-screening in St. Petersburg in 2002. But they did say that the depiction of the reactor accidenta cooling system failure that nearly led to a nuclear explosionwas accurate.

But even after that information was made public in a box-office blockbuster starring Harrison Ford and Liam Neeson, Kuryedov, in his response, refused to offer any more information about the K-19s accident, writing that this accident is officially known to all concerned parties.

Independence of Courts Under Question
Last weekend, St. Petersburg hosted a conference called The Realisation of the Constitutional Right of Citizens to Information in Contemporary Russia. Among the participants were eminent lawyers, human rights NGOs, including ERC Bellona and the St. Petersburg-based human rights watchdog Citizens Watch.

Also in attendance were well-known journalists such as Vladimir Kara-Murza, a former anchorman for the Russian television networks NTV and, later, TVSboth of which were closed by administration of Vladimir Putin for their critical coverage of his rule. Russias much loved political satirist Victor Shenderovich was also at the conference, as were representatives of the government.

At this conference, Yuri Kozlov, the head of St. Petersburgs Garrison Military Court, claimed that the integrity of judges is strong enough to deflect any pressure from the executive branch of the government. He said that his Moscow colleagues had lobbied and achieved the passage of legislation guaranteeing the independence of the judicial branch.

He also emphasised that courts in Russia are more independent than the mass mediawhich, according to the conferences resolution, is in a terrible plight.

But the persistent disinclination of Moscow-based civilianas opposed to the openly puppet-mastered militarycourts to consider Bellonas complaint against the Defence Ministry shows, once again, that independent courts remain, as yet, merely a dream in contemporary Russia.