Officers of the Federal Security Service, or FSB, raided the office of an Irkutsk-based environmental organization, and confiscated 15 computer hard drives in late 2002. Now the Baikal Environmental Wave files a suit against the FSB.

Published on February 6, 2003 by Rashid Alimov 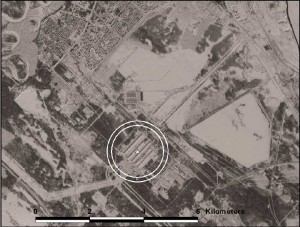 UPDATE: The criminal case against the environmentalists was closed in October, 2003

Several secret police operatives came abruptly. Three FSB officers entered the room, while the fourth stayed in the doorway. That is how a traditional search starts.

The officers said that they were going to search the office of the Baikal Environmental Wave, and everybody had to gather in one room. Only the leaders of the Wave were allowed to watch the operation.

The formal motive of the search was the fact that Baikal Wave carried out a project in official cooperation with geologists from the Sosnovgeos research organization. The project was to create a map of radioactive contamination around the Angarsk Electrolysis Chemical Combine, or AECC.

"There are reasons to believe, that a map of uranium content in the water near AECC, of a scale of 1:50000 and stamped classified can be found in the office of the Irkutsk-based Baikal Environmental Wave," reads the search warrant signed by FSB major Krizhanovsky.

"It can be found", wrote Krizhanovsky But when Bellona correspondent read the copy of the search report, it turned out that no classified document was found in the office.

The Baikal Wave co-chairperson, Marina Rikhvanova told Bellona Web that during the search the FSB-men seized two maps. One depicts the territories around AECC, and another shows agricultural activities in the Shelekhovo region. The second map had been earlier publicly displayed at an official exhibition, and was given to the environmentalists as a present, after the exhibition finished. The FSB confiscated also aerial-photos, written off as obsolete by a local research institute, and 15 computer hard drives out of 18.

"Seizure of the hard drives had no sense, as we had no electronic versions of these maps on them. And I can add, the maps contained no information on how the buildings of the plant were situated and nothing about AECC’s precise borders," the environmentalists said. The most frightening was that the FSB seized also the full list of volunteers of the organization.

Though FSB claimed there were no charges against the environmentalists, a definite intention to accuse them was seen clearly. It is enough to say that soon after FSB’s raid resulted in nothing interesting, tax authorities visited the office.

What secret was revealed?
The Federal Security Service, successor to the infamous KGB, says that topographic basis of the maps is secret. The maps showing uranium contamination were sent in March, 2002 by the Baikal Wave environmentalists to the state organizations to draw their attention to radiation problems of Irkutsk county.

FSB claimed, resolution of the maps was too high, 500 meters. Secret police did not take into consideration that the maps were made without the coordinate grid, while this circumstance immediately declassifies the map, and that the topographical basis of the maps was made as long ago as in 1974.

On November 22nd, the FSB launched a criminal case, saying that a disclosure of state secrets took place (article 283, part 1 of the Russian Criminal Code).

The first to laugh at these FSB accusations was Russian cosmonaut Sergey Krichevsky, who said that all the coordinates to within one meter can be absolutely legally learned from the earth orbit. The same was mentioned by the famous environmentalist Alexander Nikitin. "We should decide, what really harms the state, and what really doesn’t," he said.

The first attempt in such malpractice was made by the FSB and police forces in Novosibirsk. They seized a GPS device from Sergey Paschenko, director of an NGO the Scientists of Siberia for Global Responsibility. Global Positioning System, or GPS, device shows coordinates of locations according to satellites. The seizure was explained by confused references to a law, adopted in 1996, stipulating that geographical coordinates can not be defined with inaccuracy less than of 30 meters. Otherwise, the coordinates become allegedly state secret. Official permission to use GPS, issued by the State Communication Regulatory for Paschenko was said to be a mistake. Thus, the departments, obligated to care for people’s safety and security, hampered environmentalists to complete a map of radioactive contamination, while precision of such map is very important for people living in the area rendered harmful.

Secrecy of coordinates more accurate than 30 meters seems today to be an anachronism. Everybody can find photos of Angarsk, Seversk, Ozersk and Sarov, with resolution of 16 meters and better in the Internet. 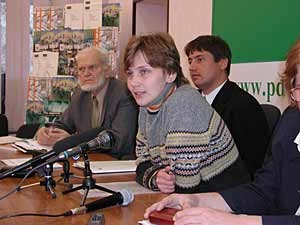 AECC had been a secret site until mid 1990s. As a radiation hazardous enterprise liable to the state control it was first mentioned in a state report 1996. In 1995, AECC’s annual conversion capacity was 18,700 MT of uranium. AECC produces LEU using centrifuge technology, with an annual capacity of two million SWU. The combine exports enriched uranium to several countries, including China and North Korea. The combine’s employees are participating in the construction of a gas centrifuge plant in China.

The combine represents a lot of hazards, including possible radioactivity contamination of the adjacent area — the city of Angarsk with 300,000 population and country houses, which are situated nearby.

The research carried out in 2001 by the Baikal Environmental Wave in cooperation with the geologists from the Sosnovgeos research institute uncovered moderate uranium contamination of the premises neighbouring to the combine.

Amount of uranium in the water reservoirs exceeds the regional background radiation 10 folds, at the territory stretching from the AECC site to the Angara River, which flows North West from Lake Baikal to the Yenisei River. This uranium amount varies from 160 to 475×10-8 grams per litter. The amount of radioactive waste stored at AECC totals to 803.6 tonne with the activity of 123.9 GBk, but its radionuclide content is unknown.