The Ussuriysk city court is scheduled on Jan. 23 to decide whether imprisoned environmental journalist Grigory Pasko will be paroled. Despite confusion surrounding the paperwork necessary for the hearing to take place and foot-dragging by the prison colony administration to produce their own statement on Pasko’s eligibility for parole, the hearing will proceed as scheduled, Pasko’s lawyer, Ivan Pavlov said.

Published on January 19, 2003 by Charles Digges 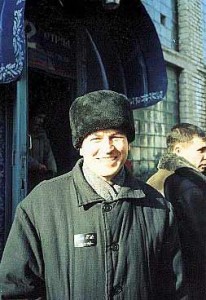 Pasko’s defence team had appealed for his parole late last month, asking for early release on good behaviour after two thirds of his four-year sentence had passed and he became legally eligible for such a release.

The appeal was filed with the city court of Ussuriysk, in which jurisdiction Pasko is serving his sentence for allegedly "intending" to pass notes on Russian naval manoeuvres to the Japanese media.

Upon receiving the appeal, Pavlov said, the Ussuriysk city court scheduled a parole hearing and demanded that the colony administration forward to judges by last Monday documents from Pasko’s case and a history of his behaviour while doing time in the colony — a necessary condition for a parole hearing.

Initially, according to Pavlov, the administration was supposed to convene last Monday to prepare these documents, as well as a statement of their own expressing their opinion on whether or not Pasko, a reporter for the Pacific Fleet’s Boyevaya Vakhta newspaper, should be freed. The meeting was, however, postponed until Friday, Pavlov was told, because the warden of the colony was called away on business.

"It’s possible, but difficult, to believe this explanation," Pavlov told Bellona Web Tuesday. "They are always ‘having breakfast,’ so there is no guarantee the prison will look at the case on Friday."

Indeed, the Friday meeting did not take place either, although documents from Pasko’s case and his history in the colony were sent on Thursday. The court, however, has not yet received a statement from the prison colony administration on whether or not it considers Pasko ready for release.

Confusion was compounded when Interfax released a report saying Ussuriysk prison officials would meet to formulate their statement on Pasko’s eligibility on Jan. 24 — the day after the parole hearing. Pavlov said he was asked by Interfax to comment on that information, which Interfax said it had received from the prison colony. Pavlov knew nothing about this development.

Oddly, when the Interfax report was published, Pavlov found that the reporters had attributed the information to him. "I don’t know why they would have printed that," Pavlov said Sunday.

According to Pavlov, the prison administration’s decision is not crucial for the parole hearing to take place, and that it will proceed as scheduled on Thursday. But the confused scenario points to blatant dawdling by the prison administration, if not the opposition of the entire Russian judicial machine to setting Pasko free — even for good behaviour in prison and after most of his baseless sentence has been served.

Indeed, the past several days have seen blows aimed at Pasko’s defence. On Dec. 24, the chairman of the Military Collegium of the Supreme Court, Nikolai Petukhov rejected a so-called supervisory appeal filed on Pasko’s behalf. This supervisory appeal, had it been accepted by Petukhov, would have required the 15 justices of the Supreme Court Presidium to review the conviction, which may have possibly led to its reversal.

That same month, according to Pavlov, Yury Kalinin, head of Russia’s state corrections department, known by the acronym of GUIN, said in a conversation with Glasnost Defence Foundation chairman Alexei Simonov that Pasko has no prospects for early release because he has not admitted to his guilt.

Simonov, one of Pasko’s most ardent supporters, sent a telegram to Russian President Vladimir Putin last Monday, asking for assistance with Pasko’s release, Interfax said. Kalinin could not be reached for further comment and other justice ministry officials refused to discuss the case.

"Thus GUIN brass expressed their opinion well before the hearing that their decision on an early release — just like in the times of the Inquisition — is not based so much on the convict’s behaviour as on whether he thinks he is guilty or not," Pavlov told Bellona Web on Thursday.

"Such position is contrary to Russia’s laws and the Constitution, according to which no one can be forced to express their opinion and beliefs or renounce them."

"Obviously, common sense dictates that a battle is going on with all of our opponents," Pavlov said, although he declined to make predictions about the outcome of the hearing.

He said, however, that he expected the prosecution to follow the same line — making a case for keeping Pasko behind bars that would hinge on attacking the reporter for not admitting to and apologizing for his guilt. But this is an apology that Pasko — because of his innocence — cannot make.

"I predict that the prosecutions argument will run something like — ‘see, he doesn’t admit his guilt, he doesn’t repent.’ That’s about all I can see," said Pavlov on Tuesday. He added that he has devised a counter-argument to such protestations that he will make public within the next week.

The foundation for Pasko’s conviction was a set of notes the reporter made while attending a meeting of naval brass. The Pacific Fleet Court in Vladivostok, acquitted Pasko of the accusation of having passed the notes, which allegedly concerned "secret naval manoeuvres," to the Japanese media —, but convicted him for having had the alleged intention to pass the notes.

In 1999, the same court had acquitted Pasko for treason, but convicted him of abuse of his official authority for his negligent contacts with Japanese media, which included the passing of 1993 footage to Japanese TV journalists of Russian Pacific Fleet ships illegally dumping nuclear waste in the Sea of Japan. Pasko was subsequently amnestied, but still appealed the conviction to the Supreme Court.

The unexpected result was a new trial and a conviction in December 2001, on the same charges of treason that Pasko earlier had been acquitted for. His attorneys, Bellona and rights groups throughout the world maintain that these charges were fabricated by the FSB and relied heavily on two now-cancelled secret Defence Ministry decrees — Nos. 010 and 055.

Although these decrees no longer exist, Pasko’s appeal to the Military Collegium of the Supreme Court last June was rejected.

The judicial irregularities in the case have compounded to such an extent that Pasko was named by Amnesty International as the third Russian Prisoner of Conscience since Andrei Sakharov and Bellona’s Alexander Nikitin. These irregularities — which constitute violations of the European Convention on Human Rights — were catalogued in a 50-page application to the European Court of Human Rights in Strasbourg, sent by Pasko’s defence the same day his supervisory appeal was rejected.

Among the rights spelled out by the convention that have been violated in the Pasko case are the right to determination of the criminal charges within a reasonable time; the right to a fair trial; defences against being tried retroactively and under too extensive an interpretation of existing laws; and the right to freedom of expression.

The Human Rights court, however, is severely backed up and it is unlikely Pasko’s case will be reviewed prior to his originally scheduled release date in 2004.