The Green Group of the European Parliament has nominated the imprisoned Russian journalist Grigory Pasko as its candidate for the prestigious Sakharov Prize for the Freedom of Thought.

Published on September 6, 2002 by Jon Gauslaa 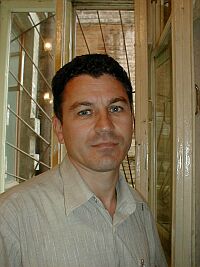 The European Parliament has since 1988 honoured an individual or organisation with its prize for freedom of thought. The prize is named after Andrei Sakharov, the Soviet dissident, nuclear physicist and Nobel Peace Prize-winner. It is awarded to individuals or organisations for making significant contributions to the promotion of human rights and basic freedom, and for firmly opposing persecution and injustice.


Pasko was first arrested in November 1997 after having published a number of critical articles focusing on the environmental situation in the Russian Far East. He spent 20 months in custody under appalling condition before he was acquitted on treason charges in July 1999 and released. The verdict was, however, cancelled in November 2000.


After a second trial, a military Court in the Pacific Port of Vladivostok convicted Pasko to four years for alleged treason in December 2001. The sentence was confirmed by the Military Collegium of the Russian Supreme Court on June 25, 2002.

Pasko’s case has attracted huge international attention and the conviction has been strongly criticised both internationally and within Russia. Amnesty International adopted him as a prisoner of conscience in January 2002, saying that his punishment appears as a retaliation for his reports on the Russian Navy’s environmental abuses. The organisation also expressed concerns regarding the fairness of the trial and the independence of the Court.


— Grigory Pasko symbolises the current situation in Russia where civil liberties are still not respected when individuals reveal the unpleasant truth, said Daniel Cohn-Bendit, co-chairman of the Green Group. — Pasko exposed the shocking environmental situation in the Russian Far East. To award the Sakharov prize to him would stress that the problems of nuclear safety in Russia remain a major reason for concern for the European Union and the World, Cohn-Bendit said.


The European Union’s Conference of Presidents will select the winner on October 17, while the award ceremony will be held in Strasbourg at the parliamentary session in December 2002.