Activist from Ecodefense, under pressure from Russia’s ‘foreign agent’ law, flees to Germany

The head of a Russian environmental organization has been forced to flee to Germany to avoid arrest on several charges stemming from Russia’s so-called foreign agent law, which targets non-profit groups receiving even small amounts of foreign assistance.

The head of a Russian environmental organization has been forced to flee to Germany to avoid arrest on several charges stemming from Russia’s so-called foreign agent law, which targets non-profit groups receiving even small amounts of foreign assistance.

Alexandra Koroleva, who heads the office of Ecodefense in the Russian enclave of Kaliningrad, has asked for political asylum in Germany after five charges for evading fines were brought against her by Russia’s Justice Ministry. The charges carry a prison term of up to two years each.

Ecodefense, which is one of Russia’s oldest environmental groups, has a long history with Russia’s foreign agent law, which numerous rights-oriented groups, including Bellona, see as a government tool to muzzle dissent.

In 2012, Ecodefense refused to comply with the 2012 law, which requires any Russian non-profit that receives foreign funding or engages in vaguely defined “political activities” to register on a public roster of “foreign agents.” The term is a loaded one in Russian, suggesting that the groups to which it applies are engaged in treasonous activities. 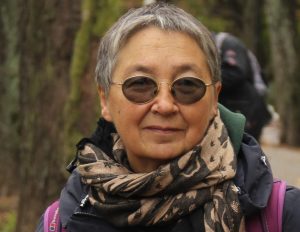 After it refused to register, Ecodefense was forcibly added to the foreign agent blacklist by the Justice Ministry in 2014. The group has long said this move was connected to its protests of a nuclear power plant slated to be built in Kaliningrad, where the group is based. By convincing potential investors not to finance the plant, Ecodefense managed to stop its construction – something the group says made it the subject of official resentment.

On Monday, Vladimir Slivyak, Ecodefense’s co-chair, confirmed to Bellona the Koroleva was in Germany, where she is seeking political asylum.

“Until the criminal cases are closed, her return is excluded,” he said, adding that the group will remain in Kaliningrad until it is no longer possible to do so.

Slivyak chalked up the charges against Koroleva as politically motivated, and said the Justice Ministry is operating out of a vendetta for the group’s successful scuttling of the nuclear plant.

“We never participated in politics and the struggle for power; nevertheless, the Justice Ministry accused us of ‘political activity’ as a foreign agent, issued fines and then demanded punishments,” he said. “Is being an environmental activist a crime, or is someone standing behind the backs [of authorities], who doesn’t like opposition to nuclear power plants, coal mines or the clear cutting of trees? All Ecodefense has ever done is protect nature and the rights of citizens.”

The ‘political activity’ clause of the foreign agent law has been left intentionally slippery, allowing the Justice Ministry board powers to construe its definition as it sees fit.

In that light, the law has been remarkably effective. By the time the law had been in force for three years, it had managed to shutter more than a third of NGOs in Russia, which received even small sums in grants and donations from foreign entities.

Rights and environmental groups have been the main targets of the law, but political activity has been so broadly construed that even animal shelters, soup kitchens and health organizations have fallen under its lash.

And where Russia’s official newswires used to regularly carry stories of rights and environmental organizations being tarred as foreign agents, articles about blacklisted groups fallen off over the past year, suggesting most foreign funded NGOs have just given up and closed.

Ecodefense is one of the few that have stayed in the fight. The group, along with 48 other Russian NGOs, has an application before the European Court of Human Rights arguing that the foreign agent law violates numerous human rights norms, including freedom of speech, expression and association, and says that the political activity clause is arbitrarily enforced.

And while Ecodefense has refused on principle to register itself as a foreign agent, it has still complied with the onerous audits and reports it is required as a civil society group to file to the Justice Ministry.

The charges against Koroleva claim she had failed to pay some $18,000 in fines. Curiously, the Justice Ministry levied the charges of fine evasion in May, but they weren’t made public until last week, when all five indictments were unsealed in the space of 40 minutes.

Between 2016 and 2018, Ecodefense and Korleva, in her managerial capacity accrued some $34,000 in fines, largely stemming from the group’s refusal to register as a foreign agent and publicly identify itself as such. But lawyers for the Public Verdict Foundation, which is handling Ecodefense’s case, told Human Rights Watch that Korleva had never received notices of the fines and didn’t know she had to take action.

Ecodefense’s bank accounts have, in any case, been frozen since November of 2018, making it unable to make the payments.

Yet in a rare twist, some local politicians have taken up Koroleva’s cause. Anton Alikhanov, the Kaliningrad Region’s governor told the RBK Russian newswire that he wants to help Koroleva raise the funds to pay her organization’s fines. A number of crowdfunding sites have also sprung up to help extinguish the group’s fine debt.

Whether such debts are legal and fair, however, will fall to the European Court of Human Rights to decide.