The Krasnodar-based ecological organization that brought international attention to the environmental destruction caused by the 2014 Sochi Olympic games will have its appeal against shutdown heard before Russia’s Supreme Court in a month, the group’s director Andrei Rudomakha said Wednesday.

Published on February 11, 2015 by Charles Digges 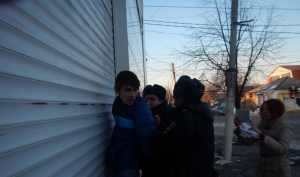 The Krasnodar-based ecological organization that brought international attention to the environmental destruction caused by the 2014 Sochi Olympic Games will have its appeal against shutdown heard before Russia’s Supreme Court in a month, the group’s director Andrei Rudomakha said Wednesday.

The Environmental Watch on the North Caucasus EWNC, which has been targeted by Russian authorities for detailing the corruption and ecological devastation in a damning report that led up to the Games, was originally to have appeared before the Supreme Court today.

But Rudomakha, who is operating with pro bono legal assistance from Greenpeace Russian and the Human Rights Resource Center as EWNC’s assets have been frozen, was granted another month before the appeal.

In his filing, he told Bellona by email that he stipulated Russia’s Ministry of Justice has so far neglected to review new changes in the group’s charter that became effective on January 28, and which could exempt it from prosecution under Russia’s harsh “foreign agent” NGO law and other legislation.

Olga Kokoreva, an attorney for the Ministry of Justice, agreed to the delay.

“We also consider that without a legal assessment of these documents [EWNC’s new charter], it would be unjustifiable to address questions of [the group’s] liquidation,” Kokoreva was quoted as telling the court by the Kavkazsky Uzel news site (in Russian).

Meanwhile, environmentalists and human rights activists are planning on February 18 to stage domestic and international demonstrations for the freedom of one of the group’s central members, Yevgeny Vitishko. Vitishko was sentenced to three years in a penal colony in a hushed hearing during last year’s Olympics in what rights groups say was a deeply flawed series of trials for the crime of spray painting on a construction fence in a protected Black Sea national park area. Amnesty International has named him a Prisoner of Conscience.

The decision to disband EWNC was handed down on November 24 by the Supreme Court of the Republic of Agydeya, which neighbors the Krasnodar Region, which hosted the Sochi Olympics. EWNC often conducts environmental inspections in the republic.

The Agydeya court ordered EWNC’s liquidation over a laundry list of accusations including “treason against the state” and “extremism.” The court also moved to dissolve EWNC based on the notion it doesn’t have representative offices in six other regions where it conducts activities, as well as a vague reference to “other violations of federal law, bearing a gross and repeated character,” according to court documents shown to Bellona by EWNC.

The new amendments in EWNC’s charter that the Russian Ministry of Justice will be reviewin during the continuance of the Supreme Court appeal are aimed at addressing some of the bureaucratic violations pointed out by the Agydea court.

Specifically, EWNC adopted more formal procedures for convening gatherings and conferences of the group, as well as elections of its governing staff, as stipulated by th Agydea Supreme Court.

But Rudomakha said the case had little to do with rewriting such procedures.

“In defending citizens’ environmental rights, we intentionally and unintentionally raise uncomfortable questions, putting us into conflict with various government agencies,” Rudomakha said. “It’s no coincidence that raids on our offices not only by the Justice Ministry, but prosecutors, tax authorities, and the FSB, began before the Olympics — they wanted to distract us by fending off their attacks.”

“There’s a mass of organizations that do nothing […] and let [ecological and rights] abuses slide,” Rudomakha continued. “Our group is the most active natural preservation group in the Northern Caucasus, and that’s why they’re trying to close us.

The Agydeya decision was met with fury from international and domestic environmental organizations, including Bellona.

In December, when EWNC’s appeal to the Russian Supreme Court was accepted for review, Bellona was one of nine organizations to sign a joint statement to the Justice Ministry on EWNC’s behalf .

“The Ministry of Justice’s initiative to liquidate one of the most active public organizations, whose work is focused on guaranteeing the public’s most important rights and interests is a clear absurdity and more closely resembles unfounded reprisal,” read the joint statement that was also signed by Greenpeace and WWF Russia.

“The liquidation of EWNC because the court hinted they are ‘extremist’ is a another bizarre twist in Putin’s war on the NGO-community in Russia,” Bellona’s Managing Director Nils Bøhmer said when the joint NGO letter was sent to Russia’s Justice Ministry. “EWNC’s only ‘crime’ is that it has documented illegal activities surrounding the Sochi Olympic games.”

Protestors for Vitishko’s freedom after his sentencing last year as part of a nationwide campaign. (Photo: EWNC)

Environmentalists from Russian and around the world have said in emails they are planning to stage demonstrations demanding Vitishko’s freedom on February 18.

The “Free Vitishko” electronic mailing list has indicated campaigns will take place in Moscow, Krasnodar, in front of the Russian Embassy in Washington DC, and in several other small cities in the Moscow Region.

Environmental activist Yevgenia Chirikova, provided a website (in Russian) containing a map of where demonstrations in Russia are slated to take place.

What form the protests will take and how many people are expected to turn out is as yet unclear.