KRASNODAR, Russia – Bellona, other environmental groups and the Krasnodar Region’s Ministry of Natural Resources established the physical existence of the construction fence Russian geologist Yevgeny Vitishko, an Amnesty Prisoner of Conscience, is serving a three-year prison sentence for defacing. 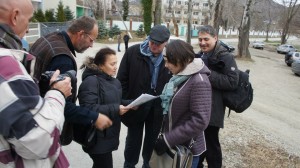 KRASNODAR, Russia – Bellona, other environmental groups and the Krasnodar Region’s Ministry of Natural Resources established the physical existence of the construction fence Russian geologist Yevgeny Vitishko, an Amnesty Prisoner of Conscience, is serving a three-year prison sentence for defacing.

The Natural Resources Ministry and the prosecutors office in the Krasnodar Region, where the fence is located, repeatedly stated in official correspondence to Bellona (in Russian) and throughout Vitishko’s trial that neither agency had any record of the construction fence’s existence – though the fence is clearly visible in satellite imagery, and has been visited numerous times by the Environmental Watch on the North Caucasus (EWNC) . Nikolai Rybakov, director of the Environmental Rights Center (ERC) Bellona, Natalya Yevdokimova, also of Bellona, EWNC’s Vladimir Kimaev, the Natural Resource Ministry’s Svyatoslav Udintsev, and other Greenpeace – who are in the Krasnodar Region for a meeting of the Presidential Council on Human Rights – took to the woods and found it.

What this means is that Vitishko, who was accused of spray painting the words “this is our forest” on the fence in what has come to be known as “the fence incident,” was sent to the KP-2 Sadovaya Prison Colony in the Tambov Region 700 kilometers south of Moscow without any physical evidence of his alleged crime. No graffiti was in evidence during Bellona’s visit.

The fence – which has undergone nearly military refortification since Vitishko was imprisoned – surrounds the mansion of Krasnodar Regional Governor Alexander Tkachev.

The lavish dacha was built in the protected Black Sea National Park as a perk from the Kremlin for Tkachev’s support of the 2014 Sochi Winter Olympics. EWNC unveiled a half dozen other cases of crony mansions – including Vladimir Putin’s own $1 billion Italian baroque compound – built in protected Black Sea areas in the run up to the Olympics.

Suren Gazaryan, Vitshko’s friend and formerly a chiropterologist at EWNC, had also been accused of spray-painting the fence. The two in 2011 staged a demonstration of 12 participants against the fence and its total blockage of access to public beaches.

In 2012, Gazaryan fled the country for asylum in Estonia as official crackdowns on EWNC intensified and a charge of attempted murder was leveled at him.

Vitishko, who elected to stay in Russia, recently reiterated to Bellona in his first interview since his incarceration, that neither he nor Gazaryan had anything to do with putting graffiti on the fence.

Further, witnesses to the demonstration during which the graffiti was sprayed on the fence who were interviewed separately by Bellona, all say neither Vitishko nor Gazaryan did it. All witnesses, who were interviewed in Krasnodar and Sochi in February, independently identified two women who tagged along on the demonstration as those responsible for the spray-painting.

EWNC and Bellona searched for several months to find the two women, without success.

Gazaryan won this year’s prestigious Goldman Environmental Prize for unmasking the official corruption and graft behind the shi-shi “Putin palaces” that gutted the nationally protected seashore.

The fence that jailed an innocent man

The fence, as seen by the visiting environmentalists – and as earlier established by EWNC – not only surrounds the gubernatorial summer home, but also encroaches on protect forest lands and a 20 meter zone surrounding the Black Sea beach on which it is illegal to build anything.

Rybakov said that at a bare minimum, its location violates Russia’s water code because it completely blocks access to a public beach.

Further, sections of the fence itself that face the sea are thickly surrounded by barbed wire laid on the ground, ostensibly to prevent any approach to the fence itself – where someone might again spray paint “this is our forest.” A portion of the fence photographed by EWNC after it was painted in 2011 with the words ‘This is our forest.’ (Photo: EWNC)

When the environmentalists tried to access the area via the main entrance, security guards stopped them and refused to let them pass. They said the fence guards a “sanitarium for agricultural complex workers,” and that specially approved passed were needed for entrance.

Rybakov reported that while walking around the perimeter, the group saw no evidence of vacationing agricultural workers, but they did see plenty of signs saying “Beware: Wild Animals.”

This would explain why agricultural workers aren’t exactly queuing up for a spell of rest here. Given Tkachev’s ruthless war against local environmentalists – specifically Vitishko, who collects rocks, and Gazaryan, who studies bats – it might be the most accurate description of what lies behind the vicious snarls of barbed wire. Aside from the signs, Rybakov observed that the fence was adorned with dozens of video cameras.

Rybakov visited the fence in connection with the gathering of the Presidential Human Rights Council in the Krasnodar Region – where extremely aggressive tactics have been deployed against ecological organizations who opposed the Olympics and further documented the continuing degradation of Russia’s largest nature reserves. Barbed wire laid around the perimeter on the beach side of Tkachev’s fence, as if to guard against a sea invasion. (Photo: Bellona/EWNC/Greenpeace)

Official pressure on EWNC as it compiled a damning report on ecological devastation that it released during the Olympics led to arrests of the group’s members; constant and ongoing surveillance of their daily movements; the destruction of one of its vehicles by Russia’s security services; the flight of report co-author Suren Gazaryan for asylum in Estonia; and, most prominently, Vitishko’s imprisonment.

Days after Bellona’s publication of the story, EWNC was ordered to disband altogether on suspicion of “extremism” by the Supreme Court of Agydeya, a republic neighboring the Krasnodar Region. Ever since the group began its Olympic environmental critique, it had been warned repeatedly by security services, that its negative stance on Sochi was seen as “treasonous” group member Dmitry Shevchenko told Bellona.

EWNC has filed an appeal with the Presidium of Russia’s Supreme Court. It’s unclear when the case will be heard.

Click here to see the photos collected by Bellona, EWNC and Greenpeace.