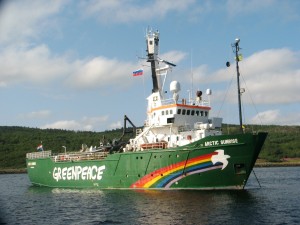 The ship’s departure, however, has been accompanied by little fanfare, as venue after venue in Murmansk, where the ship has been located for nearly 11 months, refused to let the activist group hold a press conference.

Vasilyeva told ITAR-TASS that the ship was ready to depart Tuesday, but the boat was waiting for permitting documents to be issued.

“We hope that the Arctic Sunrise will be on guard of the Arctic again very soon,” Vasilyeva told the agency.

The crew led by captain Daniel Rizotti and insurance representatives have been working on the vessel in port at Murmansk since the end of June, Vasilyeva said. After months without proper maintenance, the ship needed careful repair, she said.

“The vessel was in disorder,” Greenpeace and insurance representatives said. “A large part of navigation equipment removed from the ship has not been returned to its owners yet.”

Twenty-eight activists and two freelance journalists were arrested by Russian authorities after they attempted to scale Gazprom’s Prirazlomnaya Platform in the Barents Sea in an incident that made international headlines. Russian security services abseiling from a helicopter and seizing the Arctic Sunrise at gunpoint on September 19. (Photo: Denis Sinyakov for Greenpeace)

They were seized by Russian border guards and their vessel towed to the port of Murmansk. The protesters – nationals of 18 countries and four Russians – were initially taken into custody on charges of piracy, later downgraded to hooliganism.

After two months in a Russian jail, the activists were released on bail. In December last year, the crew was released under an amnesty backed by President Vladimir Putin. All 26 foreign activists had returned home by the end of last year.

For all the attention the initial arrests brought, however, the departure of the ship that brought the activists, who came to be known around the world as the “Arctic 30,” was muted, if not outright stifled.

A planned press conference scheduled by Greenpeace in Murmansk had to take to the road as one major hotel in the city after another refused to rent the group space.

Hotels told Bellona and the Greenpeace activists that they had suddenly developed electrical problems, or that their conference rooms had been overrun by other conventions at a summer time during which Murmansk is virtually devoid of residents and business gatherings.

The activists eventually settled for giving comment to journalists in one of Murmansk’s parks, which police quickly threatened to label as an “unsanctioned meeting” and disband. A press conference in search of a venue as Greenpeace was turned away by local hotels in Murmansk. (Photo: Anna Kireeva/Bellona)

Speaking in more detail about the seaworthiness of the Arctic Sunrise, Greenpeace-Russia representative Yevgeniya Belyakova said the vessel could make it back to Amsterdam under its own power. Its departure date, assumed to be Tuesday, she said, was entirely dependent on Russian officials now.

The crew that will guide it back to the Netherlands consists of 15 members, none of whom are Russian citizens, she said, and none participated in the initial protest action at the Prirazlomnaya platform.

The Piracy Case lumbers on

According to Belyakova, and despite press reports carried by ITAR TASS, the case against the activists still stands and has been continued until September 24. Investigators were not given their 10 month investigation period, so no private affects or computers have been returned to Greenpeace activists.

Greenpeace meanwhile has not finished its assessment of the damage done to the Arctic Sunrise. The Russians have meanwhile demanded $5000 in port fees for harboring the vessel.