Yevgeny Vitishko, imprisoned for his vociferous opposition to environmental devastation wreaked by the 2014 Sochi Olympic Games, says he’s been singled out for abuse by guards at his prison colony for revealing facts behind a May 20 prisoners’ riot that occurred in the Tambov Region camp. 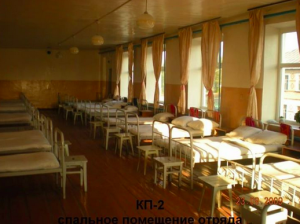 Yevgeny Vitishko, imprisoned for his vociferous opposition to environmental devastation wreaked by the 2014 Sochi Olympic Games, says he’s been singled out for abuse by guards at his prison colony for revealing facts behind a May 20 prisoners’ riot that occurred in the Tambov Region camp.

Vitishko further alleged that prison officials at the colony, which is supposed to run on a minimum-security regime, implemented a giant hush campaign surrounding the beatings.

Amnesty International has declared Vitishko a prisoner of conscience, and his imprisonment widely viewed as retribution for his co-authorship of a damning assessment of ecological damage caused by the Games. In a letter he dictated on June 4 to visiting activists from the Environmental Watch on the North Caucasus (EWNC), later sent to reporters, he said his disclosure of last month’s riot has led to calculated harassment provoked by guards among prisoners against him, making “the conditions of [his] incarceration unbearable.”

The earlier May 22 letter that Vitishko dictated by telephone for publication on his Livejournal.com blog (in Russian) revealed brutal beatings of prisoners during a search on May 20. According to Vitishko’s account, a number of prisoners he couldn’t specify were beaten in the KP-2, or Sadovaya Prison colony’s quarantine unit and chuffed off to solitary confinement.

The quarantine unit is the colony’s clinic, and the prisoners, undergoing medical treatment declined janitorial assignments.

“I consider the events of May 20 at KP-2 […] to be a flagrant abuse of human rights, which is testifies to the fact that Russia does not observe international conventions on prisoners’ protections from torture, other inhumane treatment and acts of humiliation of dignity as punishment,” Vitishko wrote.

Complaint leads to suspension of privileges

After the release of his account, which included a request that human rights organizations and the Presidential Council on Human Rights investigate the incident, Vitishko has been ostracized and harassed by other prisoners set upon him by guards. Vitishko in the Black Sea coastal town of Tuapse prior to his sentencing during the Olympic Games. (Charles Digges/Bellona)

“On June 4, after a short visit with my friends, I was told that after evening checks the telephones in the cell blocks were not turned on,” his letter reads. He further said that two head prison officials, identified as IV Vlasov and NV Saprunov had informed other inmates that, “Vitishko broke the telephone with his own tongue.”

Telephone privileges at the Sadovaya Colony are guaranteed, given the colony’s minimum-security classification, but are often hard to come by because of queues.

He also said numerous inmates were now being denied trips to the commissary where they buy food and supplies in further efforts to dangerously turn inmates against him.

Shutting up the victims

Following the beatings, Vitishko accused the Sadovaya colony’s staff of initiating a mass cover up, forcing beating victims to sign letters saying they had no complaints against the administration, and off shipping numerous other prisoners to different colonies with higher security regimes. Prison transfers in Russia are protracted and guarantee inmates are out of contact for weeks to months.

Vlasov and Saprunov, the wardens named by Vitishko, both declined to comment when reached by Bellona Tuesday.

Nadezhda Tolokonnikova of Pussy Riot, who after spending two years in a prison colony herself founded the prisoners’ rights organization Zona Prava, told Bellona that guards turning prisoners against other inmates by depriving the population of privileges was common practice.

“It’s a petty method used by prison administrations to single out, silence and abuse prisoners who insist on their rights,” she said by telephone from Moscow. “Creating bad blood among a prisoner’s cell mates is effective torture, and other prisoners violently enforce silence.”

Vitishko was sentenced to three years at the minimum-security facility in February for allegedly spray-painting a fence surrounding the summer home of the Krasnodar Region’s governor, Alexander Tkachev, which was built on public lands. Dozen’s of witnesses have told Bellona Vitishko had noting to do with the graffiti, which read “This is our forest” and “Tkachev is a thief.”

EWNC’s Suren Gazaryan, who was present for the 2011 fence protest, co-authored the ecological report and has fled Russia because of extreme official harassment. Gazaryan, also a close friend of Vitishko, won the prestigious Goldman Environmental Prize for revealed corruption and environmental violations surrounding the Sochi Olympic Games.