MOSCOW – A court in Krasnodar, Russia – the capitol of the region where the Sochi Olympics are being held – today jailed for three years an outspoken environmentalist who worked to draw attention to ecological ruin along the Black Sea coast caused by the Winter Olympics, his lawyer told Bellona.

Published on February 12, 2014 by Charles Digges 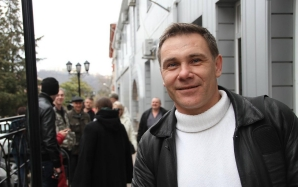 MOSCOW – A court in Krasnodar, Russia – the capital of the region where the Sochi Olympics are being held – today jailed for three years an outspoken environmentalist who worked to draw attention to ecological ruin along the Black Sea coast caused by the Winter Olympics, his lawyer told Bellona.

Yevgeny Vitishko, a 40-year old geologist and member of the Environmental Watch on the North Caucasus (EWNC), today had his appeal against a three-year custodial sentence for spray-painting on a construction fence in a protected forest rejected.

Vitishko’s sentencing, which came after two minutes of deliberation by the judge, Alexander Konov, coincides with a damning report on the desperate state of the environment (in Russian) around Sochi thanks to the 2014 Olympics, which EWNC released today in Moscow at a press conference that started just as the Vitishko’s appeal was rejected. An English translation of the report is expected soon. Today’s court proceedings began three hours late in a move some activists ascribed as an attempt by authorities to scuttle the report’s release and press conference.

Vitishko was already in jail serving 15-day administrative sentence on what his supporters and Bellona say are trumped up charged of public swearing, or “petty hooliganism.” The Krasnodar court said Vitishko will serve the remainder of that sentence in his home town of Tuapse, 70 kilometers northwest of Sochi, before he is transferred to a penal colony for the next three years. Though the appeal was heard in Krasnodar, Vitishko was only present in the courtroom via what journalists and his supporters tweeted was a very poor video link to the courthouse in Tuapse, about 180 kilometers to the south.

Today’s penal colony decision stems from Vitishko’s sentencing, along with another EWNC activist, Suren Gazaryan, to probation and a three-year suspended sentence in June 2012, when the two were found guilty of defacing the construction fence. The fence surrounds the palatial mansion of Krasnodar Regional Governor Alexander Tkachev, known locally as “Sanya.” The spray-painting on the fence read “Sanya is a thief” and “This is our Forest.

The Tuapse court heard Vitishko’s initial appeal for reducing the three-year suspended sentence on December 21, but rejected it, saying he had missed two meetings with his probation officer.

In a surprise verdict, the court then sentenced him to a three-year custodial sentence instead, though let him go free on an agreement that he would not leave the city until his appeal, originally scheduled for February 22, was heard. The Krasnodar skyliine this morning: FSB headquarters, grey building to the upper left, and Regional Governor Alexander Tkachev’s city resident, visible to in the middle with the red-shingled turtle-shaped roof. (Photo: Olga Zazulya via twitter)

On February 3, during a Krasnodar Region-wide press against members of EWNC, Vitishko was picked up by local police for allegedly swearing in public at a bus stop. On that day, he had received permission from authorities travel to Sochi with another EWNC member, Igor Kharchenko, to discuss the final draft of the environmental report released today.

After Vitishko was arrested on the public cussing charge, he was sentenced to 15 days administrative incarceration during a hearing at which he was not allowed to have his lawyer present.

After he was jailed, the Tuapse court moved his appeal hearing on what has come to be known as “the fence incident” from February 22 to February 12.

Alexander Popkov told Bellona that the switch in the date of Vitishko’s appeal of the custodial sentence was intentional. “The decision to jail Vitishko was based on pressure from the authorities. The goal is to isolate him from the local and international community due to his activism,” his lawyer Alexander Popkov said in court on Wednesday, according to Twitter feeds.

Efforts to hide jailing from the world fail

That maneuver apparently failed. At least one correspondent for Agence France Presse was present in the Krasnodar courtroom, and German ADR Television was on hand in Tuapse. Additionally, live tweets in both Russian and English poured out of both courtroom via smartphones and tablets.

Since November there have been at least six detentions of EWNC members, some of whom have been jailed for three to 15 days. Five activists were jailed over Russia’s sacred New Year’s holidays for driving within 10 kilometers of Tkachev’s fence.

The week of February 5, proved to be especially difficult.

By the account of Dmitry Shevchenko, an EWNC member and a lead author of the Olympic environmental report, police and secret service agents surrounded EWNC’s Krasnodar office and were busily detaining activists, namely Kharchenko. Karchenko had been hauled in earlier that same day for drunk driving forced to take an alcohol test.

He was released when the results came back negative, but later in the day, a group of thugs trashed his car in front of EWNC’s offices, which the activists caught on closed circuit television.

Vitishko’s arrest on the swearing charges is seen by his lawyer and supporters as part of that larger sweep on the group, which coincided with the activists putting the finishing touches on the report it released today. In short, authorities did not want that report seeing the light of day. The famed Akhshtyr Landfill, which has been polluting the waters of the Mzymta river, Sochi’s drinking water supply. (Photo: EWNC)

“The case against Vitishko has been politically motivated from the start,” said Yulia Gorbunova, Russia researcher at Human Rights Watch in a statement.

“When the authorities continued to harass him it became clear they were trying to silence and exact retribution against certain persistent critics of the preparations for the Olympics,” she said.

Amnesty International on Tuesday appealed to the International Olympic Committee president Thomas Bach to address “harassment of environmentalists.” So far, the IOC has remained silent.

Both Vitishko’s supporters and Bellona say all the charges against him are a complete fabrication. Bellona was the last media organization to interview Vitishko before he was jailed, and he is, as his supporters say, not given to using salty language.

Vitishko today fully denied all charges against him.

In his last words across the scratchy tele-link to the Krasnodar courtroom before the court momentarily broke for sentencing, he said: “I did not do anything wrong. I did not spray-paint the fence. I am innocent, and the last case (for petty hooliganism) was fully falsified.” “These are fabricated accusations, and the punishment of three years’ penal servitude is completely out of proportion compared to the alleged offense,” he said.

Tkachev is ardent supporter of President Putin, who has championed the Games as a pageant to show off “the modern Russia,” and was closely involved in Sochi construction projects.

Tkachev is not the only political luminary to have constructed a mansion on the protected lands of Sochi National Park and the Western Caucasus Mountains World Heritage Site. Others include Russian Orthodox Patriarch Kirill, whose mansion features an onion dome; scandal-tarred former Defense Minister Anatoly Serdyukov – who built himself two mansions; and most prominently Putin himself, who built himself a massive baroque palace on some 70 hectares of land, complete with two helipads and a yacht pier. Its estimated cost is $1 billion, paid for by the coffers of a phony medical supply charity.

In earlier interviews with Bellona, both Vitishko and his colleague, Gazaryan – who in 2012 fled the country for Tallinn, Estonia – both admitted they had held several demonstrations near Tkachev’s fence to draw attention to the torching of environmental law in the face of the Sochi Olympics. But both insist they had nothing to do with spray-painting it. The damage to the corrugated metal fence – which EWNC activists say was more related to efforts to cleaning it than to any defacement – amounted to some $4000.

When asked in an earlier interview why Tkachev would remain so angry about a fence nearly four years later, Shevchenko said,  “Tkachev takes these kinds of things very personally, and also controls the courts.”

In his interview with Bellona late last month, Vitishko told Bellona that the fence itself is not even marked on Krasnodar Regional Forestry maps, and hence, does not officially exist – a fact the Krasnodar regional prosecutor today acknowledged in court.

EWNC’s Shevchenko promised that Vitishko’s jailing would not be quietly dusted under the carpet.

“We have many, many supporters, thousands,” he told Bellona in a side interview at the release of the Olympic environmental report today in Moscow. “There is enormous attention to Vitishko’s case.”

Of equal note are the contents of the report presented today, at which Greenpeace Russia and Dr. Alexei Yablokov, Russia’s most esteemed environmentalist, were present. Yablokov’s attendence alone lends as much credence to the report’s findings as does an extensive tour of the razed landscapes of the Sochi Region.

The report itself outlines the absolute colossus that surrounded the Sochi Olympic push – the environmental laws it tosses aside or rewrote, the decimation of protected lands throughout the North Caucasus region, poisoning rivers, destroying wetlands, and eviscerating habitats for protected animal and plant species.

It also details how, precisely, Sochi – which is Russia’s only subtropical region – came to be picked by the International Olympic Committee (IOC) to host the 2014 Winter Olympics over far more prepared cities like Salzburg, Austria and Pyeongchang, Korea. Both of these cities, according to the report as well as the IOC, already had their Olympic infrastructure built, where Sochi’s – at the time of the 2007 IOC vote in Guatemala –  existed mostly only on the drawing board.

Shevchenko, in describing the report, said that securing the votes of Southeast Asian countries – who didn’t really care where the Winter Olympics were held – was key. This task was delegated to then-Tajik Vice-President Gafur Rakhimov, and according to the Russian Olympic Committee, he delivered.

Sochi received the nod from the IOC in a squeaker vote of 51 votes to 47, beating out Pyeongchang by an unprecedentedly narrow margin relying mostly on votes recruited by Rakhimov. The report postulated that Rakhimov was in a unique position to make certain offers to IOC members for their votes.

Rakhimov is today wanted in Russia, Tajikistan and the United States for his close ties to some of Russia’s biggest organized crime bosses, Yaponchik – now deceased – and “Uncle Khasan” and their lucrative narcotics trade.

What happens after the Olympics?

But questions linger among activists about what will happen to them after the Olympics and the international media have blown out of town. Could Vitishko, for instance, be freed as he would no longer pose a danger to Putin’s Soviet-scale dreams?

“Any number of scenarios are possible,” said Shevchenko. “The general tendency of pressure could get even worse. For the moment, the mitigating factor against even more pressure remains international attention.”

Others at the EWNC office told Bellona that today’s verdict was almost surprising, and shows that Vitishko is far from the last of them who will face the Kremlin’s off key music. The organization is under siege, they said – a lightning rod for Moscow’s intolerance of criticism of the Sochi Games.

Because of this, Bellona’s Bøhmer urged Norwegian Prime Minister Erna Solberg, who will be travelling to Sochi on Friday, to meet with  members of EWNC.

“Now, it’s even more important that our Prime Minister take the time to meet the environmental activists with EWNC, both to show her support and learn more about the environmental damage inflicted on Russia by the Olympics,” he said.

Liya Vandysheva of Bellona contributed to this report from Moscow.