Freeing few so many can live in Hell: Putin’s Sochi bait and switch and Olympic ‘protest zones’

This week, 72 hours before the one-month-countdown to the opening ceremonies at the Sochi Olympics began its ominous tick, Russian President Vladimir Putin eased blanket restrictions on protests at the Games and designated a Black Sea town 12 kilometers from any Olympic activity as a “protest zone” for use by those who want their say against any number of bad things these Olympics represent.

Published on January 11, 2014 by Charles Digges 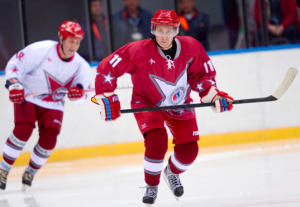 This week, 72 hours before the one-month-countdown to the opening ceremonies at the Sochi Olympics began its ominous tick, Russian President Vladimir Putin eased blanket restrictions on protests at the Games and designated a Black Sea town 12 kilometers from any Olympic activity as a “protest zone” for use by those who want their say against any number of bad things these Olympics represent.

The International Olympic Committee  (IOC) – which has bent over backward to stay upwind of the stench of Russia’s environmental rape, homophobia, violent suppression of negative public opinion, discarded human rights, corruption, and smothering police crackdowns as it prepares for Sochi – breathed a ditheringly disconnected sigh of relief over the protest pen.

“We welcome this announcement — it is in line with the assurances that President Putin gave us last year and part of the Russian authorities’ plans to ensure free expression during the games while delivering safe and secure Games,” IOC spokesman Mark Adams told the Associated Press.

Tanya Lokshina, Russia director at Human Rights Watch, told the New York Times the easing of the ban was part of Russia’s “efforts to convince critics that it’s a democracy where freedom of expression is respected within reasonable limits.”

“I suggest they shouldn’t let themselves be convinced that easily,” Lokshina added.

Indeed, the dim international view of Russia’s Olympic activities, which has caused many heads of state like US President Barack Obama, British Prime Minister David Cameron, and German Chancellor Angela Merkel to say they would give the Games a pass, has led to some embarrassing official stammering in Moscow.

“Please, everybody, welcome,” Dmitry Chernyshenko, president of the Russian Olympic organizing committee, disjointedly stuttered in December when asked by reporters about Russia’s prevailing anti-rights and anti-environmental policies relative to the Olympics. “You’re free to express those opinions during the Games.”

None of it, however, seems to be doing anything to halt the continuing persecution and prosecution of anti-Olympic activists and environmentalists, who are far beyond the concern of organizing officials and off the IOC radar.

The negative views many Russians want to freely express, as most know by now, is as long and tawdry as the double bookkeeping entries for what will be history’s most expensive Olympic gathering ever.

The price tag is now $55 billion in mostly-state expenditures, about a third or more of which has been siphoned off by bribes and kickbacks to avaricious officials.

Gian-Franco Kasper, a Swiss member of the IOC told a Swiss radio station Thursday, as quoted by the Christian Science Monitor, that corruption “appears to be an everyday matter” in Russia, and estimated as much as $18 billion of Sochi’s vast construction and development budget was simply embezzled.

Kasper’s comments are a step in the right direction, according to Boris Nemtsov, former Russian deputy prime minister and author of a study detailing the corruption he says has infected all aspects of the preparations for the Sochi Games.

“We’ve been trying to interest the IOC in this issue for quite awhile, but to no avail,” Nemtsov told the newspaper. “Until now there’s been no clear acknowledgement of the issue, even though the facts are widely available. The attitude is that ‘all is well’ and if there’s any corruption it’s a problem for the host country and not the IOC.”

Nemtsov estimates that some $30 billion has been bilked off by greedy Olympic pocket-liners. The initial estimate for hosting the Games came in at $12 billion, and the overblown swelling of costs triggered a 2010 investigation by Former President Dmitry Medvedev, which eventually just died an anonymous death in the government’s bureaucratic abyss.

The $55 billion expenditure – bribes and all – outweigh Sochi’s closest cousin in the pantheon of paranoid Olympics only by Beijing’s cloistered, activist jailing, Internet blocking Summer Games in 2008 by $16 billion. Sochi’s sanctioned protest area, in fact, takes a page from Beijing’s book – where Chinese officials designated protest areas but then refused to grant permission to protest in them and harassed and arrested those who applied to.

This is tidbit ought to give any who might consider applying for protest permits in the protest zone in the town of Khosta – located between central Sochi and the Adler district, where the main Olympic Village is – serious doubts and second thoughts about opening their mouths or unfurling their banners.

The creation of the protest zone is as cynical as anything else that came from the Kremlin as Moscow hurtled toward the New Year and realized it was having a serious PR problem with the Olympics.

After a decade in prison, during which Khodorkovsky had often issued trenchant and uncomfortably accurate criticism’s of Putin’s ham-fisted rule, he quietly vanished from his Karelian prison camp on a private jet and reemerged in Berlin for a family reunion and with nothing particular to say.

For her part, Tolokonnikova, whose imprisonment yielded some of the most scathing modern commentary of Russia’s penal and political system, and which was published world wide, seemed to understand that she and Putin were thinking the same thought, just in opposite directions: Even in today’s Russia, the Gulag is one of the most authoritative rostrum’s for political dissent. The most effective means of gagging Tolokonnikova, she and Putin seemed to understand, was to free her. Prior to her release – which was initially schedule for March anyway – she formally asked if she could remain behind bars. When she was forced from her frozen Siberian prison camp, Tolokonnikova, dressed only in a light jacket against the Arctic freeze, immediately addressed the down-clad and fur-donned press corps with an impassioned condemnation of the Sochi Olympics.

“I’m calling on a boycott of the Olympic games because the current measures are totally insufficient,” she said through frosted breath. “What’s happening today, releasing people only a few months before their term expires, is a cosmetic measure.”

She was right. At nearly the exact moment the Kremlin was trying to force-feed her her silence, the anti-Olympic meat-grinder was operating in overdrive along the Black Sea coast in a courtroom in Tuapse.  Yevgeny Vitishko, a prominent Russian activist who has reported on the environmental fallout from Sochi 2014, was handed three years in prison.

Vitishko and Suren Gazaryan were in 2012 found guilty by the same court of “deliberate destruction of property” at a construction fence built on protected public lands that was shielding heavy illegal logging and the construction of a large summer home for Krasnodar Regional Governor Alexader Tkachev – known locally by his nickname Sanya.

Vitishko and Gazaryan, both members of the Environmental Watch on the North Caucasus, received suspended three-year sentences, at the time. Local prosecutors meanwhile kept pushing for jail time.

Gazaryan, who was later falsely accused of threatening a guard at the pier of Putin’s private Black Sea mansion – one of several mansions, including Tkachev’s, built for political luminaries on public lands and forests – fled Russia for political asylum in Estonia, as the extra charge of attempted murder would have immediately brought him a long prison sentence.

According to twitter posts from Gazaryan, Vitishko is still free pending his appeal against the three-year prison sentence, handed down on December 20 by the Tuapse court. Vitishko’s appeal will be heard later this month. In total, though even EWNC admits sections of the fence were removed to reveal illegal logging, the “deliberate destruction of property” to the fence that Vitishko and Gazaryan were tried for amounts to two slogans that were spray painted on it: “This is our forest,” and “Sanya is a thief.”

But if Gazaryan and the plight of essentially anyone who speaks out against the Olympics are any indication, Vitishko’s appeal will likely be unsuccessful.

Where the amnesty of political prisoners and the designation of a protest zone are obvious ploys for Putin to try to rub a little polish on Russia’s abysmal international image, continued persecution of Olympic nay-sayers is more than likely to create an entirely new breed of dissidents who, when the fanfare blows by after the closing ceremonies, will have plenty of bruises to show.

“Authorities in the Krasnodar region are harassing the environmentalists and activists who dare to speak critically of them in the context of the preparations for the Olympics in Sochi,” Yulia Gorbunova, a researcher for Human Rights Watch, told AP. As the games approach, she said, “the pressure is increasing.”

One for instance is the New Year’s detention of four activists who had attempted to visit that very same fence surrounding Tkachev’s mansion on public lands. According to accounts on EWNC’s Facebook page, Alexei Manrigelya, Anna Mikhailova, Valentian Borisova and Tatyana Borosova were all stopped by police some 10 kilometers from the fence. They were held at roadside for some four hours, two of them accused of resembling wanted terrorists. Later hauled to the police station in Tuapse, they we accused of being belligerent with police, but they were never shown any paperwork as to why they were being detained or what, if anything, they were charged with. They were held in a cell for three days of so-called administrative detention before they were set free.

One for instance pointed out by Human Rights Watch is that of Svetlana Kravchenko, a reporter with Caucasian Knot.

She pushed her way out of the office and into the street, as the guards clutched at her clothes and tore off a sleeve. The next day, Kravchenko was charged with beating up one of the guards who had towered over her.

Andrei Rukhdomana, a colleague of Vitishko and Gazaryan’s at EWNC, has repeatedly landed in hot water with authorities, been detained at protest rallies, vilified in state-controlled media, and his office has been raided by the Federal Security Service, or FSB, the successor organization of the KGB.

Now he is being investigated on suspicion of slandering a judge he claims of convicting an activist over an unsanctioned protest on officials’ orders.

“Authorities are sending a message,” Rudomakha said: “Don’t go too far, or things will get worse.”

This is the second in a series of Bellona is producing on the Sochi Olympic Games.