“We have changed society’s perception of the environment. People’s attitude towards our work has changed more than Bellona itself” says Bellona’s founder Frederic Hauge. 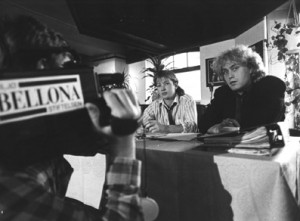 The Bellona Foundation was founded on 16 June 1986 and made ​​public at a press conference in October of the same year. On the picture Rune Haalnd (left) and Frederic Hauge.

The environmental foundation Bellona was initially created in an occupied room on 16 June 1986, about seven weeks after the Chernobyl accident. Its name was chosen randomly by looking into an encyclopaedia. At the letter ‘B’, the name of a war goddess, Bellona, was found.

– We were welcomed with much skepticism, but that was at a time when the environmental battle went from a battle for a clean nature to a wider environmental one, says Bellona’s founder Frederic Hauge.

He believes that people’s attitude towards the environment has changed more than Bellona itself.

– No one recognised the environment as something important.  It was seen as a threat to jobs and the challenge was strong. Therefore, it was important that someone stood up and said, “This is not acceptable”. Bellona has revealed major scandals and has been an important actor, and a driving force in politics, and this is something that I’m proud of, says Hauge today.

The first years of Bellona were characterised by activism and lot of media attention.  On the picture above, Bellona and Nature and Youth[1] occupied the Minister of Environment’s office, Sissel Rønbeck.

– When we occupied Rønbeck’s office, we had already sent 17 briefs to which we had received no replies.  While this was recognised as a major procedural error she had repeatedly ignored it.  As a result of the occupation, we successfully put the Titania affair and environmental concerns more generally on the government’s agenda. Activism worked this time; and it was urgent to put the environment on the agenda, says Hauge.

He became a big celebrity in Norway although he was only 20 years old at the time. An “environmental rebel” with curls and strong opinions. 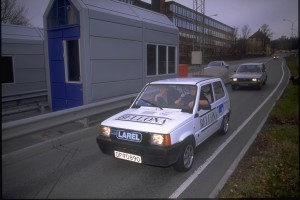 In 1989, Bellona imported Norway's first modern electric vehicle. The vehicle was repeatedly driven through road tolls without paying. These actions were part of a year-long battle to introduce tax benefits for zero-emission vehicles. The fact that Morten Harket of the Norwegian pop group A-ha was sat in the passenger seat helped in gaining more attention.

It was also a big responsibility to be the spokesman for such an important cause. I have spent much time on keeping myself professionally updated. I want to be honest and do it right. But it was and still is, very focused on me as a person, said Hauge when he was interviewed by the Norwegian radio.

There, he was also asked about the controversial transition from Bellona’s youthful activism to its cooperation with industries.

-In the 80s, we travelled around, broke into factories and dug up waste. But industry changed their attitude; they took control and straightened things out. We see that we have shaped business attitudes in greener directions, but there is still work to do, says Hauge.

From his experience industry is willing to work together to find environmental solutions.

-Moreover, politicians hear you in a different way when you have the backing of industry.  Before, we could mostly learn about the environment, but now we can also learn a lot from industry, says Hauge.

In addition to collaboration with policy makers and industry actors, Bellona has also launched several companies: The Sahara Forest Project that conducts research on how can we produce food in a greenhouse in the desert with the help of saltwater, sunlight and CO2.  The Ocean Forest Project, on the other hand, looks into the cultivation of several species in the same fish farming installation. The Ocean Forest Project uses feed residues and faeces from farmed fish from Rongøy Hordaland, which in turn nourish mussels, halophytes and seaweed. These can be used for food, animal feed or bioenergy. 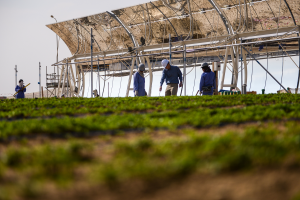 Sahara Forest Project's pilot plant in Qatar showed that it was possible to grow food in the desert using salt water, sunlight and CO2. Credit: Bellona