In a vote of the European Parliament plenary on 28 April, European politicians voted to phase out unsustainable first generation biofuels. This confirms the deal that was reached between Environment Committee MEPs and EU Member States a few weeks ago and follows several long years of negotiation. 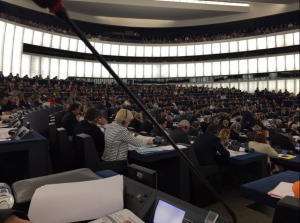 The deal will see an end to EU support to land-based, first generation biofuels, such as biodiesel from oilseed rape and palm oil, that compete with food production and can in some cases have higher life-cycle emissions than fossil fuels. This comes on the back of an earlier decision in reform of the EU State Aid Guidelines to end subsidies to such first generation biofuels after 2020.

This brings and end to years of unintended consequences resulting from the EU’s target of 10% renewable energy in the transport sector by 2020, which has been alrgely met with first generation biofuels. This target and incentives to reach it have led to unustainable biofuels production around the world causing environmental and social damange, including Indirect Land Use Change (ILUC), the accounting for which was a key component of this deal.

But the ILUC accounting will not be as comprehensively included as initially asked for and first generation biofuels will still make up about half of the 10% target. The growing use of maize for biofuels, as well as the growing harvesting and burning of wood from precious natural forests for power production, is not addressed in this deal.

On a positive note, the deal will see more support for advanced biofuels, such as those produced from algae, for instance in the form of a subtarget. And this vote brings an end to several years of insecurity and political jockying, setting sights forward and away from unsutainable buiness as usual.

For more on the content of the deal, see here.