ST. PETERSBURG – Russian authorities will continue to rely on a bright atomic future for the country as well as environmental and technical leadership in drilling the Arctic shelf, as Moscow continues to turn its back on the worldwide boom in the renewable energy sector and place its bets on nuclear power and fossil fuels. 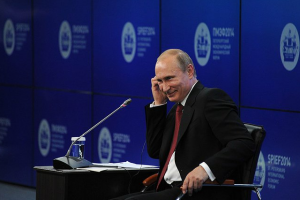 ST. PETERSBURG – Russian authorities will continue to rely on a bright atomic future for the country as well as environmental and technical leadership in drilling the Arctic shelf, as Moscow continues to turn its back on the worldwide boom in the renewable energy sector and place its bets on nuclear power and fossil fuels.

At last week’s International Economic Forum in St. Petersburg, President Vladimir Putin met with the highest echelons of foreign and domestic business associations participating in the global economic summit and told them of Russia’s energy strategies.

Putin, in his role as president and former prime minister, has always held a skeptical view of renewable energy. He has consistently ignored progress of technologies in this sphere successfully demonstrated by other countries, and turned a blind eye to the rise of renewables in the energy mix of other countries.

In 2010, he announced that, “the only alternative to fossil fuels for today is nuclear energy. Other alternatives are merely monkeyshines.”

In 2013, Putin poked fun at wind energy, saying: “Here are wind powered electric stations. You know how loud they are and how they shake the ground around them. They produce such an effect that the worms jump out of the ground, to say nothing of the moles.”

Now, Putin has “begun to think” about the alternative that have already been deployed in the majority of the world’s countries: “Of course, we are now already thinking on perspective energy sources – on renewables, on hydropower, on solar, and are also working on in this direction. Our companies are earmarking funding on this, they have the support of the government in this work,” Putin announced at the summit.

However, as soon as he dispensed with that lip-service, he slipped into the following rhapsody extolling the virtues of fossil fuels: “At the same time […] everyone understands that energy consumption will be growing in the next 30 years, while the structure of primary sources of energy will not change. Therefore, we will focus on the production of hydrocarbons and the development of nuclear generation,” he said, according to the official transcript of his remarks.

Bellona adviser Larisa Bronder said that it is apparent Russia will continue places its bets on developing hydrocarbon production and nuclear energy. Government subsidization of traditional energy and the lack of a legislative base and norms for alternative energy are a significant hurdle to their development in Russia.

“For many years running, the portion of renewable energy in Russia has consisted of less than one percent,” said Bronder. “The lack of any kind of renewable growth doesn’t support that it will be at 4.5 percent of the energy balance.”

Putin said with evident disappointment that nuclear accounts for only 16 percent of Russia’s energy mix. “We want to see at minimum a 25 percent nuclear energy contribution in the volume of our energy balance,” Putin said. “This demands significant, large-scale work toward the introduction of new capacity – we are planning to bring online 20 to 25 large reactors. This is about as much as was brought online during the entire Soviet period.”

“They planned to reach these figures by 2020, made some corrections, and then named 2030, and now they are not really establishing any deadlines at all,” Slivyak told Bellona.

“From the heights of today, I really doubt that in Russia we will ever reach 25 percent [dependence on nuclear power],” Slivyak said. “Up to now, there has not been such a tempo of development to make this possible. The nuclear energy development plan has hit a dead end – we see small growth, but all of that will continue until they begin to shut down old reactors,” continued Slivyak, adding, “I think that in 15 to 20 years the portion of energy supplied to Russia by nuclear energy will be even less than now.”

In describing plans and strategies in the sphere of hydrocarbons, Putin expressed his confidence that oil and gas will not drop in price because “the reserves remain difficult to extract and are in areas with no working infrastructure.”

He again affirmed that Russia is counting on the Arctic, announcing that Arctic fields, specifically the Yamal field, are considered the most promising and large-scale, and he noted that development would also occur in eastern provinces.

Putin’s assertion that “our companies apply the best technology from the point of view of ecological preservation,” cannot be characterized as anything but astonishing.

All countries endeavoring to work the Arctic freely admit that there is not such thing as avoiding accidents, and say that no one possesses adequate and effective technology for spill liquidation in Arctic ice conditions. That is, everyone but Russia.

Without the slightest experience in recovering oil from the Arctic shelf, Russia has made the barest beginning on working there, albeit with the help of §woefully inadequate equipment, such as the aged and decrepit Prirazlomnaya platform – and has the further temerity to trumpet to the world it is using the “best technology.”

“It’s with pride that I would like to note that in that direction, our companies, albeit by half a step, are ahead of our foreign partners,” said Putin, though with evident embarrassment about using Gazprom’s Prirazlomnaya as an example.

“I constantly cite one example (though we are now replicating it),” said Putin. “Here sits the head of Lukoil, I have been on their platforms many times and seen how they work. Not one gram gets cast into the sea, all is utilized, all is packaged and sent to shore, and is utilized there, you understand. It is simply impressive. And thusly practically all of our companies work the shelf.”

This article was translated by Charles Digges (charles@bellona.no)