ST. PETERSBURG – This city’s 12th International Energy Forum kicked off its two-day long proceedings with a less than inspiring portrait of Russia’s forays in the area of renewable energy, the prospects of which still remain mired in complexities –but ended on an encouraging note calling Russia’s NGOs to action.

Published on September 21, 2012 by Igor Yadroshnikov 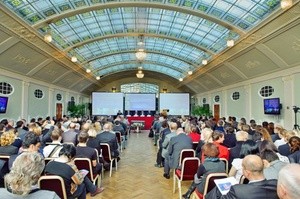 Yet Alexander Nikitin, chairman of the Environment and Rights Center (ERC) Bellona, based in St. Petersburg, presented a case for the importance of NGO participation at such forums, as they provide one of few venues where civil society organizations’ opiniion can be heard with the same weight as the voice of government and industry – and hence make achieving such goals possible.

Nikitin said NGOs were able to meet amongst themselves “at a moment’s” notice, but that “meeting with experts, scientists, institute directors, and leaders of companies dealing with alternative energy is more complicated – but meet with them we must.”

Nikitin said that organizations like Bellona, Greenpeace, and the World Wildlife Fund are engaged in alternative energy issues and are often confronted with questions of what they can do aside from produce reports and have their independent research heard.

“For instance, from the point when we began forward the project of the floating nuclear waste storage facility Lepse, to the point that, the other day, it was put into dry dock for dismantlement, took 20 years,” said Nikitin. “We saw results, an ending point.”

Nikitin underscored that such forums offer NGOs a chance to see a “light at the end of the tunnel.”

“It is then necessary to always keep learning – after all, everything changes: new ideas, technologies, inventions, approaches,” he said, adding that “finding about these in good time is very important – we must be prepared for conversations on equal footing with authorities and scientists.”

A legislative base to incorporate renewables into Russia’s energy supply chain – as has been remarked on my environmental activists hundreds of times – is still lacking in Russia. But, encouragingly, government has nonetheless set itself the task of raising Russia share of energy supplied by renewable sources to 4.5 percent by 2020.

Though this figure falls well short of European Union nation’s goals for energy diversification with the help of renewables, it nonetheless injects some hope into the debate in Russia, where renewables account for only some two percent of power generation.

Questions of energy distribution likewise remain on the sidelines. Some 20 million people beyond the Ural Mountains live on oil and diesel power and have electricity for only three or four hours a day – and use kerosene lanterns at night. This is a huge segment of the Russian population for who renewable energy is a necessity.

Sergei Popsuye of the Innovation Center of Associations of Northwest Russia reported that the Russian government spends billions of dollars on building and renovating energy grids to far-lying region. Smaller, localized grids close to their energy consumers, he said, would tie off such cash hemorrhages – localized grids, that is, which rely on renewable energy.

The Kola Peninsula as an example of locally produced energy

Kseniya Vakhrusheva, renewable energy projects coordinator with ERC Bellona,  presented research on the importance of developing local energy resources, and how they are almost always more profitable than relying on traditional technologies fueled by resources imported from other areas.

She said ERC Bellona had estimated possibilities of energy production based on decentralized renewable sources that could be delivered to consumers on the Kola Peninsula. Among these were border check posts and navigational beacons, as well as the power demands of populous areas.

They then added up the costs of powering these consumers via fuel oil and coal imported to the region, the cost of paying personnel to do this, and came to certain encouraging conclusions: This energy could be significantly augmented by wind power.

“The accounting showed that wind energy aggregates could lower the cost of energy by 22 percent,” she told the forum. “Plus there is a large environmental effect as emissions could be reduced by 70 percent.” 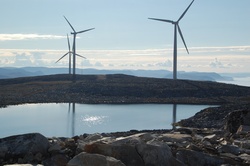 According to speakers at the conference, a number of factories producing solar panels have sprung up in Russia, and ambitious programs for wind energy are being pursued.

Pavel Bezrukykh, deputy director of the Institute for Energy Strategy (in Russian) spoke of short and long term perspectives for the role of renewable energy in Russia’s energy economy.

The current received wisdom in Russia, said Bezrukykh, is that renewable energy sources are trivial game that is expensive and without long term practical application. But the facts, he said, illustrate the opposite.

That ‘the future for renewable sources began yesterday” is a banal cliché that nonetheless holds a great deal of truth, he said.

Renewables have, in fact, acquired a firm foothold in the modern world. Electricity production from renewable sources has risen 0.8 percent since 1973 to a full three percent of energy production by 2011. This may seem insignificant, but when added to power produced by hydroelectric plants, non-greenhouse gas emitting power sources make up 19.5 percent of the world’s energy production.

Despite the global economic crisis, wind and photovoltaics are expanding at a rapid tempo. Between 2010 and 2011, some 27 gigawatts of energy production were added by solar power and another 93 gigawatts were added by wind energy.

Unfortunately, far too much of renewable energy development hinges on politics. The perspectives for using renewable energy in power production on grids in Russia’s remote regions was discussed at the forum by Viktor Yelistratov, who chairs the St. Petersburg State Polytechnic University’s department of renewable and hydroelectric energy.

“This is a very important issue for our country, where the lives of so many peopled in the far flung northern regions are dependent on the implementation of this energy,” he said. “This is fortunately reflected in [Russia’s] energy development program for the next 30 years.”

He said that the development of local source would give such regions greater energy independence, which would reduce by some 15 to 20 percent the power losses incurred by transmitting it long distances – remarks recalling those expressed by Bellona Murmansk’s Vakhrusheva.

“Generation would be in accord with demand,” said Yelistratov. “This would also reduce the cost of energy to customers.  Significant savings will come on account of [reduced] fuel deliveries.”

The types of renewable energy suitable for use in distant regions has been expanded. Geothermal energy, wind diesel stations, micro and small hydroelectric plants, rooftop and portable solar panels, biofuel installations and thermal pumps are included.

The potential for renewable energy development in the country and its regions has a scientific basis.

Bureaucratic hurdles and questions of demand

But a number of speakers presented a picture of a Russian reality that is neither administratively supportive of, nor receptive to, the demand for renewable energy.

Yakov Blyashko, whose company equips small-scale hydroelectric plants wondered about how bureaucratic and administrative hurdles could be overcome.

“There are investors interested in small hydro-electric plants in the Baikal region,” he told the forum. “They are all for it, but how to get matters before bureaucrats of the appropriate rank…generally speaking, the bulk of our customers are abroad.”

Blyashko complained that what support there is to encourage hydro-electric plants in Russia is channeled toward those plants that neighbor large federal grids – the goal being to produce power for sale abroad, something that hardly solves the problems of Russia’s energy-poor remote regions.

This is a troubling state of affairs, all the more so because Russia is indeed home to numerous projects that would allow for regional choice of renewable technologies that could easily be tailored for any given regions specific needs.

Sergei Gribkov, the general director of the scientific research center Vindek, which specializes in wind energy, told the forum that the Russian market provides many possibilities, but runs up against surprisingly low demand. By his estimation, Russia currently demands wind parks of 200 watts to 30 kilowatts.

In 2010, he said, some 656,000 small-scale wind parks came online, primarily in China, the US, and the UK, Eighty-two percent of these stations work autonomously in far-flung regions. At present, Russia can only dream about such figures.

Juha Lamberg, Vice President at Finland’s Empower Oy wind power generator boasted a staff of some 3,300 and a 405 million euro annual turnover – something that displays the attractiveness of the wind power energy to a Russian audience.

He spoke of the essentials of detailed studies and transparency with the public when erecting wind turbines. His company, he said, requires impact studies on the noise produced by the blades on the company’s wind turbines.

Further, the company consults with the local public not only on which direction a given wind turbine’s shadow will fall, but also so-called shadow flickering produced by the turbine’s spinning propellers.

All of these issues, said Lamberg, are of central importance to public dialogue between the company and the local public.

Cristóbal López of the EREDA renewable energy promotional and service firm in Spain – a country that occupies second place in the EU for its use of wind farms, told the forum that “In the EU, renewable energy outpaces the development of traditional energy sources,” and cited that some 16.3 percent of Spain’s energy needs were covered by windparks.