Vis menyen
Bellona.org > Latest News > Renewable energy > Solar > Windpark near Murmansk to become a reality while remaining a dream in the rest of Russia

MURMANSK – Pavel Bezrukh, Deputy Director for Russia’s Institute of Energy Strategy said at a Bellona on seminar renewable energy that wind energy development in Russia is lagging 20 years behind its development in other countries.

Published on September 13, 2009 by Anna Kireeva, translated by Charles Digges

Despite renewable energy becoming profitable business in other countries, Russia is only preparing to take its first steps, he said.

The factors for the glacial pace of renewables in Russia are many, but the primary culprits are the lack of an effective legislative structure allowing for renewable sources of energy to even be plugged into the grid, but the generous oil and fossil fuel use kick backs that local Russian administrations get from Moscow.

As recently as four months ago, however, the Kremlin at least seemed to be trying to set a very different stage.

Last June, Russian President Dmitry Medvedev signed an order to increase energy and ecological efficiency within Russian economics, which many interpreted as presidential support for renewable energy. This implied promise, however, remained elusive for one single reason – Russia has so far adopted no laws on renewable energy.

Bezrukh’s predictions for the percentage of energy that would be coming from renewable sources in the coming decades where therefore disquieting for environmentalists. In figures Bezrukh cited, a percentage reliance on renewable energy of Russia’s general energy production of  1.5 percent by 2010m 2.5 percent by 2015 and 2.3 percent by 2020 looks only speculative.

According to Valery Minin, head of the Kola Centre, renewable energy could replace 351,000 tons of fossil fuels per year if his centre’s programme is implemented. Some 28 billion roubles ($946 million) would be required to implement the programme, yet it is assumed that only 500 million roubles ($16.3 million) will be coming from the Murmansk Regional budget.

The documentation for the programme is currently being reviewed by the Regional government.

Murmansk awaiting windmills
The Kola Peninsula has even more concrete plans. At current two wind parks, one of 200 megawatts and one of 100 megawatts are planned for construction.

The first is planned along the Murmansk – Tumany road and will be built by Windlife Energy BV. The company’s representatives first visited the Kola Peninsula in 2001. Today, the company already has in its hands the positive decision of the Murmansk Regional Interdepartmental Commission on the Industry Citing to build the wind park, as well as all necessary documents confirming its location.

Paul Logchieis, the company’s director, the Murmansk Region has the highest wind indicators in Europe. These benchmark date were a catalyst in the European Bank of Reconstruction and Development’s decision to earmark, despite the world financial crisis, €300 million for the realisation of this project.

“Work on the first stage of the wind park will be erected 35 kilometres to the south of (the Murmansk Region village of) Teriberka, along the road to Tumany,” said Logchieis.

“We plan to begin in 2011. The wind park will be fully function in 2012. We are relying, of course, on the support of the Russian Federation for the framework of federal laws on the support of of soures of alternative energy,” he said. 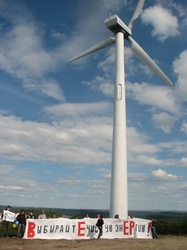 The second wind park will  be built by the St. Petersburg based Russia company Russky Veter, Ltd. (Russian Wind, Ltd). It’s 50 windmills will be situated in the Pechenga District of the Murmansk Region near the village of Linakhamara, were he average wind speed reaches eight metres a second.

“The advantage of the chosen site lies in its remoteness from large energy generating installations,” Nikolai Korotayev, Russky Veter’s chief engineer. “The wind park will enable industrial and social developent in the region,” he said.

The approximate cost of construction is €110 million. It is assumed that the means to realise the project will come only from Russia banks and investors. The plan is that the wind park will come online in 2011, and will have paid for itself in seven to nine years. Construction is slated to start at the end of this year.

While waiting around for the laws…
The heightened interest in the development of wind energy on the Kola Peninsula is centred on not only the enormous potential of wind, which is estimated at 360 billion kilowatts an hour, but the availability on the Kola Peninsula of 17 hydro-electric plants. These hydro-electric plants ensure a stability of the energy supply during periods of low wind.

“In an absence of legislative fortification for the adoption of renewable energy sources, the regions don’t wish to  run ahead of Moscow,” said Vladislav Larin, Bellona’s expert on energy safety issues.

“The is yet another delaying factor. Russia’s regions continue to receive subsidies from the centre for bringing in oil, which opens up large corrupt possibilities For precisely these reasons, (regional) administrations forbid the construction of wind parks and other installations used by renewable energy,” he said.

“In order for large-scale development of ecologically clean renewable energy and wind energy specifically to take hold, government support is necessary,” said Nina Lesikhina, Bellona Murmansk’s energy projects coordinator. “Only under the circumstances of an effective legislative base is it possible to attract investment,” she said.