MURMANSK – Developers of the new Russian gold rush, the Shtokman oil and gas condensate field, met for the second time with environmental organization in this city within the framework of an agreement between activists and the Shtokman Development Company.

Published on October 21, 2008 by Anna Kireeva, translated by Charles Digges 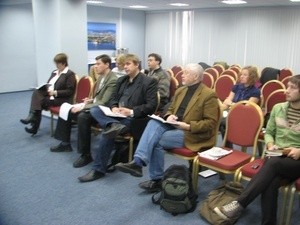 Environmentalists commented that the meetings are a step in the right direction, but cautioned that developing trust among the public is something that will take time and that actions will speak louder than words the gas giant corporation is currently offering.

Highly placed representatives of the company, however, seem at present to be serving up a palatable set of promises to observe environmental concerns – including a promise not to use nuclear power, at least in the first phase of Shtokman field development – and are at pains to show where ecological concerns coincide with the concerns of the company.

At Monday’s meeting, the company promised to observe all ecological standards, adopt the newest technology to limit CO2 emissions, and not to rely either on wind or nuclear energy in the development of the Shtokman field.

The environmental side of the meeting was represented by Bellona Murmansk, Nature and Youth, Geya, the World Wildlife Fund (WWF) and the Centre for Nature Preservation.

The work timetable
“At present, no construction work is taking place in the area of Tereberka – only small research projects, including environmental studies, are taking place in the framework of developing the field,” said Madeo in reference to a small Kola Peninsula village that will be the site of the Beloshezhka gas condensate plant.

“Construction (of the natural gas condensate plant) is assumed to being at the end of 2009, only after all research and agreements on land use have been completed.”

The question of these deadlines where raised at the last meeting of the corporation with environmentalists in May 2008. At that time, Madeo hurried to dispel fears that environmental damage would occur due to breakneck work schedules.

“I agree the time table is strict,” said Madeo at the time, “but at current I have no reason to assume that we will deviate from it for any reason.”

The 2008 timetable presented at the last meeting included plans for laying the foundation for the gas condensate plant. The discussion also included timing for construction of modules for the plant in Tereberka to begin in 2011. Gas pipelines were to begin to be laid in 2014 and bore holes were to be drilled no larger than 2011.

Sources of energy for the plant
Shtokman Development said Monday that the gas condensate plant would run on natural gas.

Madeo said that a subsidiary of Total, which deals with renewable energy, had worked on the energy supply question. Madeo said he had also held talks with Windlife Energy, which plans the construction of a 200 megawatt wind park in the Murmansk region near Teriberka and the village of Tumanny.

Shtokman Development decided against using wind energy as they said it is inconsistent, needs compensatory power supplies, and is expensive.

“It’s all a dream,” Madeo told the assembled environmentalists. 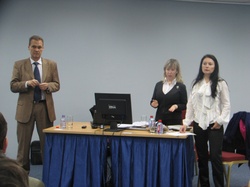 Despite this, the interdepartmental commission for siting industrial scale projects in the Murmansk Region approved such a “dream” by declaring it would build the 200 megawatt wind park.

Representatives of Shtokman Development have put heavy emphasis on the priority of ecological safety dictating their policies in developing the Shtokman field –  beyond observation of European Bank of Reconstruction and Development (EBRD) demands on investors in such projects.

The company compiled a comparative analysis entitled “Cooperative Ecological Demands of Public Environmental Organizations to Oil and Gas Companies,” expressing its priorities on worker safety, industrial safety and environmental safety. The conclusion of the analysis was that the demands of environmentalists and the company coincide.

CO2 Emissions
The oil and gas industry is one of the fundamental sources of carbon dioxide emissions that leads to global climate change.

Thus, the Belosnezhka gas condensate plant, which belongs to Norway’s StateoilHydro – the second corporation forming the Shtokman Development company – will emit 920,000 tons of CO2 into the atmosphere, and last year, this figure was around 1.5 million tons in connection with technical problems.

In 1997 the Kyoto Protocol was adopted as an agreement on the prevention of catastrophic climate changes. The countries of the European Union took upon themselves the task of reducing their **CO2 emissions by 20 percent by 2002.

Russia ratified the Kyoto Protocol in 2004, obligating itself to reducing its own CO2 emissions. With the ascension of Russia’s economy, carbon emissions have risen by 4 to 5 percent a year, and projects aimed at reducing carbon containing gasses in Russia are not being realised while the problem of climate change becomes more and more tangible.

“CO2 capture and storage technology is one of the most effective mechanisms for solving problems relative to global climate change, and, consequently, the Russia government must take upon itself the obligation to develop legislation to fortify the mechanisms of the quickest and most definite implementation of such technology,” Nina Lesikhina, Bellona Murmansk’s energy coordinator, said.

“CO2 capture and storage technology absolutely must be used in the construction of the gas condensate plant for the Shtokman field,” she said.

Madeo underscored that the company plans to use the most contemporary technology aimed at reducing CO2 emissions, and took an interest in Bellona material on the subject.

Nuclear energy installations for Shtokman
Industrial scale boring on gas fields in the Barents and Kara seas, considering the climactic and natural conditions of the sea, is possible only with platforms that are submerged or built on the ocean floor.

The creation of new technical means that are capable of working automatically for long periods of time underwater is necessary to service the platforms and the complex of the supporting vessels involved in the project. Such a proposition requires enormous amounts of energy – which has lent new impulse to discussions of using nuclear energy installations.

Gazprom – the third and final partner in Shtokman Development – has hinted broadly about the possible use of nuclear energy for development of Russian Arctic shelf oil and gas fields, including the Shtokman field.

“We are not reviewing the variant of using underwater boring systems with nuclear installations for the first phase of the Shtokman project,” Madeo said.  “This is not a realistic idea.”

Lesikhina said the Thursday’s meeting indicated that Shtokman Development was willing to speak with the public about its intentions.

“But full trust and confidence takes time to develop, especially for the realization of such a large-scale project, and this clearly requires more than five years,” Lesikhina said.