After years of research, Murmansk plugs wind power into its grid

MURMANSK – Despite the slushy day and late winter chill, ceremonies marking the plug-in of this city’s first wind power device to the electric grid went off like a breeze yesterday. The inclusion of the windmill in Murmansk’s energy mix is critically important because Russian law does not obligate the grid to buy power from the wind power producers, and procedures to include such renewable power devices on the grid are far from spelled out.

Published on April 2, 2008 by Anna Kireeva, translated by Charles Digges 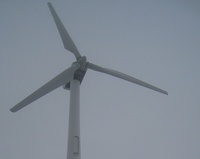 It is hoped by environmentalists that the inclusion of the windmill, which sits atop a windswept hill in Artic port of Murmansk, will set a precedent spelling out legislation that will allow for the inclusion of more wind power sources on the grid, as well as codify the currently murky legal infrastructure for putting such sources to the grid.

Environmentalists also hope that the baby-steps toward renewable energy will reduce the dependence of the Kola Peninsula – which is home to some 6 million residents spread over 129,500 square kilometres on the Barents Sea – on the aging Kola Nuclear Power Plant, two of whose VVER- 440 reactors are operating on dangerous engineering life span extensions.

Plugging it in
The big plug-in of the windmill took place under the framework of the international Development of Renewable Sources of Energy in Northwest Russia: Possibilities and Perspectives forum, organised by Bellona Murmansk, and the headquarters office of Bellona in Oslo.

Bellona organised this conference on renewable energy and established The Northwest Russia Renewable Energy Forum with support from the following sponsors: The Norwegian Barents Secretariat, The Research Council of Norway, The Royal Norwegian Consulate General in Murmansk, The British Consulate General in St. Petersburg, Sor-Varanger Kommune, NBT AS, Varanger Kraft, Alta Kraftlag A/L and Ishavskraft AS.

Plugging the windmill into the grid for commercial use was made possible by the Kolenergo energy company and the Vetroenergo (wind energy) firm. The windmill is expected to produce and sell 533,000 kilowatt hours a year to the grid.

“Finally, all the procedural issues and agreements have been cleared so that wind energy can pour into the energy system with the same rights as other energy sources,” said Valery Minin, deputy director of the Kola Scientific Centre of the Russian Academy of Sciences.

Disconnect between power grids and renewables producers
One of the biggest problems faced by producers of alternative energy sources in Russia is actually getting them connected to the grid. The grid companies are reluctant to contract to energy these producers for numerous reasons, mainly because solar and wind energy sources do not produce a constant volume of electricity.

Nevertheless, there are other wind power sources in use in Russia in Krasnoye Selo near St. Petersburg and Kulikovo in the Russian enclave of Kaliningrad.

Other countries in Europe have laws that support the use of renewable energy, and that encourage that those sources of power be close to the areas that they serve.

German law, for instance, obligates local grids to accept electric energy from sources in direct proximity them, with first dibs going to those sources based on renewable energy.

In Russia, government measures supporting renewable energy are still only under consideration as bills before the State Duma.

The windmill
The windmill that was connected to Murmansk’s grid on Tuesday was built on the hills surrounding the Ogny Murmansk hotel in 2001. The windmill had since that time been supplying electricity to the hotel itself, but not selling it to the grid.

According to the hotel’s owners, the windmill has saved them some 1.5 million kilowatt hours over the last seven years, though the figure is not precise.

“It has to be taken in to account that a special accounting of the energy produced was performed – it was a demonstration project,” said Vetroenergo Deputy Director Vladimir Kiselyov.

Plans to include this particular windmill in the grid have been under development since 2003, including the conclusion of agreements on the sale of the energy it produces. The protracted negotiations hindered Kolenergo’s restructuring.

One of the fundamental problems was dividing the company into generation units and grid units. Striking agreements with companies pumping energy into the grid were hard to come by.

Nevertheless, Vetroenergo succeeded in finding a Murmansk company that agreed to buy wind energy on the retail market, despite the fact that the price of this kind of energy is still higher than traditional forms of energy. Commercial confidentiality prevented representatives of Vetroenergo from finding out the kilowatt hour price for wind energy.

According to Kiselyov, the results of research on the wind potential of the region have been known for some time, but that it was too early to begin constructing full-scale wind parks. No one knew, said Kiselyov, how much such a project would cost, weather it would pay for itself, and how windmills would work in the conditions of the far north.

“Putting a windmill in to commercial use is an important emblematic event. It is especially gratifying that our region is the first in this process, despite the fact that more than 10 years has passed since studies began on the wind potential of the region,” said Vitaly Servetnik of the Murmansk-based environmental group Nature and Youth.

“The Murmansk region could become a bright example of the shift from traditional sources of energy on renewables.”

According to Servetnik, the regional government, specifically Governor Yury Yevdokimov, is planning the construction of three wind parks on the Kola Peninsula.

Grigory Dmitriev, senior scientific member of the Kola Scientific Centre of the Russian Academy of Sciences, said the Dutch firm Wind Life Arctic is planning an investment package in Russia’s wind energy sector, and will open an eponymous Russian firm.

Negotiations are already underway with the Murmansk Regional government outlining the construction of wind parks near the Kola Peninsula villages of Teriberka and Yuloma.

In the first stage toward realising the project, the Dutch plan to build a 200-megawatt wind park. This first stage is slated for completion by 2011 for a preliminary cost of € 250 million ($391 million).

Charles Digges translated, edited and contributed to this report.