On a global level 28% of primary microplastic releases to our oceans come from tyres.
How are the EU and the tyre industry addressing the problem? 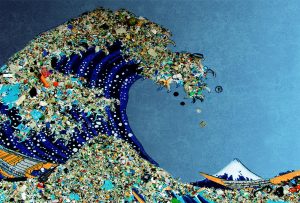 What comes to your head when you first hear “pollution from transport”?

Probably it is CO2, NOx or SOx emissions, however, there is more pollution coming from a car besides the exhaustive emissions. Recent research has found that tyres are a huge source of plastic pollution in rivers and oceans. [i]

This very important element of any car, is polluting our environment by shedding pieces of microplastics onto the road while driving. When it rains, those pieces of plastic are washed away through drains into the underground water and ultimately end up in our rivers and seas. 250,000 to 500,000 tonnes of microplastic pollution from vehicle tyres enter EU waterways every year. [i] These gigantic amounts of plastic are significantly affecting wildlife by deforming animals’ habitat or hindering them in their movement. Microplastics often contain toxic pollutants, which can have poisonous effects on animals that mistake them for food, or by absorbing them through their skin. Ultimately, microplastics can even reach our dinner plate by working their way up the food chain. The consequences of this are still unravelling.

The European Commission has released a proposal for revised tyre labelling rules, suggesting to label tyres with respect to fuel efficiency but also other parameters like their performance regarding abrasion. On Tuesday 26 March, the European Parliament adopted a new tyre labelling regulation promoting fuel-efficient, safe, durable, low-noise and “tyres that could help to minimise the impact on the environment and health while improving the safety and economic efficiency of road transport”, according to the text adopted by Parliament.This should lead to more transparency for consumers when buying tyres, while also encouraging better and safer tyre production. Tyre labelling is only the first step though. There is more action needed to be taken by policy makers to avoid the large environmental impact. The NGO Friends of the Earth suggested some measures including capturing tyre pollution from the road and a tyre levy. Additionally, there is also the need for tyre industries to start producing tyres with a lower pollution effect.

Initial attempts by the tyre industry

A large tyre production company, is attempting to tackle this issue by providing a biodegradable tyre model. As an alternative to the rubber tree, which is the traditional raw material, the company has found a way to produce tyres made out of Russian dandelion. The plants can be cultivated in Northern and Western Europe, which additionally produces significantly less transportation emissions compared to rubber from the rainforest. Nothing changes in terms of design or functionality, the tyres remain black and round. The only indicator about the material’s origin are the dandelions subtly embossed on the sidewalls. The tyre manufacturer is planning a serial production within the next ten years, if results turn out to be positive. However, the company claims that not all rubber in tyres can be obtained from dandelions, because of economic and safety reasons.

Hopefully, other tyre manufacturers will soon follow up with more environmentally friendly tyre technologies as well, making driving less of an immense, polluting burden to the environment.