Russian Navy sets the Severodvinsk, its most expensive – and oldest – nuclear sub to sea

The Severodvinsk nuclear submarine, which has been under construction for over two decades – the longest, most expensive build of any sub produced by Russia or the Soviet Union – has been handed over to the Russian Navy for depth trials as part of the new roll of out the Yasen Class submarine line, the Barents Observer news portal reported. 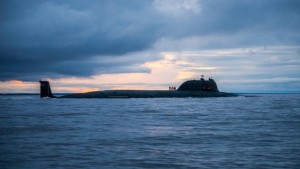 The Severodvinsk nuclear submarine, which has been under construction for over two decades – the longest, most expensive build of any sub produced by Russia or the Soviet Union –  has been handed over to the Russian Navy for depth trials as part of the new roll of out the Yasen Class submarine line, the Barents Observer news portal reported.

The launch of the $2.2 billion sub is part of a renewed build up of Russia’s submarine arsenal, and the Severodvinsk represents a major symbolic victory toward that end. Advertised initially as a “multi-purpose” submarine, the range of its nuclear missiles from 1,500 kilometers to 5,000 kilometers somewhat fogs its distinction from ballistic missile submarines.

But concerns about the age of the submarine and outdated technologies used in its construction over the last 23 years at the Sevmash shipyard abound. And staggering costs, say environmentalists, divert funds from more pressing nuclear clean up projects related to Russia’s Cold War legacy.

The Severodvinsk is the first of eight heavily armed fourth generation Yasen class submarines the Russian navy plans to launch, and it designed to replace the Oscar Class subs, of which the doomed Kursk was one. The Severodvink rolls out of dry dock at Sevmash in 2012 for its first sea trials, during which some 2000 flaws were found. (Source: sevmash.ru.)

The first Borei, the Yury Dolgoruky, put to sea in January 2013, and the second, the Yury Monomakh is currently undergoing sea trials. The next Yasen Class sub, the Kazan, cost the Russian government nearly twice as much as the Severodvinsk to get right, the official Izvestiya newspaper reported at the time.

The Severodvinsk’s blueprints were drawn up under the Soviet Union, and its construction at the Sevmash didn’t begin until 1993. It’s enlarged hull was originally of the Akula Class attack sub design.

The Severodvinks was originally schedule to be handed over to the Russian navy in 1995, and commissioned in 1998, said the Barents Observer.

But the Russian ruble collapses of that year, plus onerous technical and upgrade hurdles posed by the reactor, battle systems and weapons technology scuttled the release. The Severodvinsk finally put to water June 2010, the Barents Observer reported, and the following September set out for 100 days of sea trials.

Should this sub even be afloat?

Whether releasing a submarine that is already so old and took so long to build is a wise idea has met with ongoing mixed responses.

Even Russia’s former Deputy Commander Admiral Igor Kasatonov told the Voice of Russia official English radio station two years ago that he had concerns following the sea trial. He said that after years of construction, many of the sub’s systems “have significantly deteriorated.”

Nils Bøhmer, Bellona’s general director and nuclear physicist, said his main concerns lay with the safety of the upcoming sea trials, which will test the Severodvinsk’s functions at depths of 600 meters.

“Even though the Navy now gets more modern equipment, we know from experiences, like with the “Komsomolets” submarine that new submarines are no guarantee against accidents,” he said in reference to the Soviet Navy’s experimental K-278 experimental vessel, which sank in April 1989 during dive tests after a fire broke out, killing 42 crew members.

The Komsomolets was touted as being capable of diving deeper than any sub in the Russian fleet, and conversations about raising it and other sunken or dumped nuclear subs, reactors and other radiological hazards for environmental reasons have become a recent zeitgeist.

How to fund nuclear clean up during nuclear build up?

But no Russian ministry or agency has stepped forth to claim responsibility or offer funding for the task, said Alexander Nikitin, Chairman of the Environment and Right Center Bellona, and a former submarine captain.

Because of that, said Bøhmer, “We think that if the Russian Navy can afford spending huge amounts of money on new equipment, they should also raise funding for the cleanup of nuclear waste from the Cold War period, when up to 150 nuclear submarines were operating out from the Kola Peninsula,” argues Nils Bøhmer.

As to the safety of operating the Severodvinsk, given its age and long build, Nikitin was cautiously less alarmed.

“All the time they’ll put a hull in dry dock and wait years to resume construction,” he said. During that time any number of components, such at rubber stealth hulls and weapons and reactor systems can deteriorate, he said.

“It’s not unusual, even though the Severodvinsk took an especially long time,” said Nikitin, adding wryly, “About all there is to say, I suppose, is ‘good for you, guys, you’ve launched another sub.’”