Published on January 14, 2013 by Charles Digges 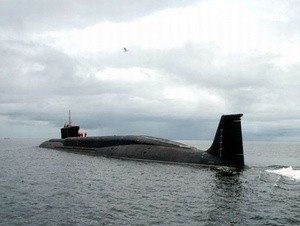 Russian Defense Minister Sergei Shoigu attended the flag hoisting ceremony at the Sevmash shipyard in Severodvinsk in northern Russia, RIA Novosti reported. The signing of the acceptance act by the Defense Ministry took place on December 29.

The Borey class submarines are expected to form the core of Russia’s strategic submarine fleet, replacing the aging Project 941, or NATO Typhoon class, and Project 667 class, or Delta- Delta-4 boats.

Russia is planning to build eight Borey and Borey-A class subs by 2020.

With the commissioning of the sub comes an increase in the number of strategic nuclear warheads deployed from Russia’s Kola Peninsula.

It also brings with it no small measure of Soviet-style jingoism: Upon the hoisting of the sub’s flag, Dmitry Rogozin, Russia’s Vice Premier and former ambassador to NATO posted a tweet to his twitter account reading “shiver bourgeoisie. You’re done for.”

A Borey class strategic submarine is 170 meters long, has a hull diameter of 13 meters, and a crew of 107, including 55 officers, a maximum depth of about 450 meters and a submerged speed of about 29 knots.

All the Borey class strategic submarines carry up to 16 Bulava ballistic missiles with multiple warheads, RIA Novosti reported. In sum, the launch of the Borey Class would mean no fewer that 600 new nuclear warheads in Russian waters.

The next two Borei Class subs, the Vladimir Monomakh and the Alexander Nevsky are currently in Severdvink awaiting more sea trials.

Bellona’s Igor Kudrik, an expert on the Russian navy, characterized the release of the Borey Class as “bragging” from Putin’s Russia.

“The US outspends the Russians dramatically, where Russia is unable to produce anything reliable or working due to enormous corruption.”

Kudrik said that even though the Yury Dolgoruky has been commissioned, it could take years before it is put into a working state

Kudrik was skeptical the Deltas would continue to operate, given that each was reaching the end of its 30-year engineered life span – even though they been upgrades, and further cast aspersions on the efforts toward the Borey.

“How can you expect anything serious from the clowns of Rogozin’s type,” he said.

Indeed, Kurdrik has been skeptical of the perceived submarine build up in the North – a sabra Putin has largely rattle to protect  enormous oil and gas reserves in the Russian Arctic.

He pointed to the even newer class of Yasen submarines the Navy is trying to put to sail with little success. The lead ship in this class, the Severodvinsk – a multipurpose nuclear sub meant be a first alert against missile cruisers from western countries – was designed in 1992, is being assembled from old parts and has been crippled by budget overruns.

Constructed by the Sevmash, the Severodvinsk– designated by the identification number K-329, and the first of the project 885 Yasen Class – was to have been passed to the Russian Navy by Sevmash in 1998, after first construction began on it in1993. Several missed deadlines later, the boat was to be launched in 2010. That was then delayed until 2011.

According to reports in business daily Kommersant and official government mouthpiece Izvestia, the latest sea trial indicates the sub likely will not be ready until summer of 2013.

One of the problems, according to an anonymous source cited by Interfax, is that the reactor not only doesn’t deliver enough power for the vessel, but that the vessel’s operation is also noisy – something undesirable in the stealth mode in which submarines are to operate.

Yet the deployment of nuclear missiles in the Barents Sea by the Russian navy is seeing a stark spike not seen since the 2006  upgrade of the Delta IV Class. As the new Borey-class enters service, the numbers of nuclear warheads will steadily increase until the six Delta-IV vessels are be removed from service, presumably around 2020.

A recent report published by the Federation of American Scientists estimates that Russia has a total of 144 missiles with 350 warheads deployed on submarines currently.

Between 30 and 40 of the missiles are on the two to three operativing Delta-III class vessels based in the Pacific, and the rest on submarines based in Gadzhiyevo near the border to Norway. The total number for both fleets will increase to 172 missiles with as many 624 warheads by 2022 – nearly twice as MANY as today, according to the American estimates.