MURMANSK – Nuclear service vessels remain a vexing problem in Northwest Russia. A large number of these ships have been in a critical condition since they were taken out of operation several years ago. How – and how soon – such vessels will be decommissioned were issues on the agenda of a seminar attended by nuclear industry officials and non-government organisations hosted by Bellona-Murmansk.

Published on February 10, 2007 by Anna Kireeva, translated by Maria Kaminskaya 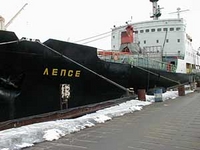 “This is a very useful practice,” said Viktor Akhunov, head of Rosatom’s department responsible for decommissioning of Russia’s nuclear sites, referring to the Bellona seminar.

“It is very interesting and important to hear all kinds of opinions. This gives us an opportunity to make the correct choice out of best options available,” Akhunov said in an interview with Bellona Web.

Akhunov’s apparent openness to hearing NGO opinion on matters like decommissioning nuclear service ships represent a departure from his historically sceptical stance toward civil society organizations.
According to Andrei Zolotkov, head of Bellona-Murmansk, the seminar is the “beginning of a route that might take decades to complete.”

Laid up or still in operation in Russia’s Northwest are 72 nuclear service vessels, of which 28 are in dilapidated condition. Many are partly or completely waterlogged. These 28 ships include seven floating spent nuclear fuel (SNF) storage facilities, five specialised tankers, one floating radiation monitoring station and 15 floating storage facilities for liquid radioactive waste (LRW).

“The problem is not just the SNF storage ship Lepse, which keeps in its holds defective nuclear fuel; from Lepse, we will have to move on to Lotta, Imandra and other vessels,” said Zolotkov in reference to other problematic nuclear waste storage and service ships languishing at the Murmank’s nuclear icebreaker base, Atomflot.

SNF storage ships Lepse, Lotta and Imandra are operated by the Murmansk Shipping Company, which also runs Atomflot and its icebreaker fleet.

Zolotkov is confident that the most important step for now is to determine the site for the construction of a future radioactive waste repository.

“Without such a burial site, no works on decommissioning nuclear service vessels will ever start,” he said. 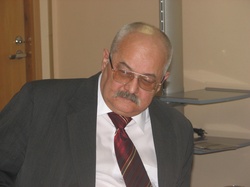 by the law. Our agency intends to do it,” said Akhunov.