Dutch firm Dockwise delivers last of its subs from Gremikha

Russia’s shut-down Gremikha base was on Monday relieved of the last derelict nuclear submarine contracted to be removed from it by the Dutch firm Dockwise, and the vessel was delivered yesterday for dismantlement at the Polyarny shipyard, Dockwise officials told Bellona Web.

Published on September 6, 2006 by Charles Digges 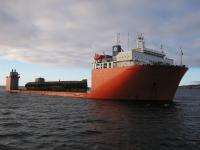 Norwegian and international officials called the transfer of the submarine a victory for post-Soviet nuclear dismantlement.

The sub’s removal from Gremikha, located on the Kola Peninsula, was part of a larger project by Dockwise to transport a total of three Russian nuclear submarines, with their nuclear fuel still on board, to dismantlement points in Russia’s Northwest.

The first two submarines, which were Victor class subs, were transported from the Polyarny Shipyard to the Zvezdochka Shipyard in Severodvinsk near Archangelsk in August. The November class submarine removed Monday – designated as the K-60 – was taken in the opposite direction to Polyarny Shipyard number 10. All three submarines were transported with their spent nuclear fuel (SNF) still aboard by special heavy transport vessels.

The two Victor class submarines were transported as the result of a contract between Canada and Dockwise, and the Novermber class sub was contracted by Norway, with technical assistance from the UK.

Taken aboard one of Dockwise’s vessels early Monday morning at Gremikha, the K-60 arrived late Tuesday at the Polyarny Shipyard near Murmansk, where Russia will dismantle and de-fuel the aged submarine, said Henk de Groot, General Manager for Engineering at Dockwise, in a telephone interview with Bellona Web.

Norwegian politics
The transport of the K-60 represents what many view as the last efforts in Northwest Russia to be sponsored by the Norwegian branch of the Arctic Military Environmental Cooperation (AMEC) group.

AMEC officials in Oslo indicated earlier this year to Bellona Web that removing the November class submarine could “complete the (AMEC) project” for Norway in an apparent turf struggle between AMEC and the Norwegian Ministry of Foreign Affairs over whose mandate cleaning up Russia’s nuclear legacy, in fact, is.

AMEC Norway is a part of the structure of the Norwegian Ministry of Defence. But furthering the political difficulties of completing AMEC’s contract to remove the November class sub was the fact that it is the Ministry of Foreign Affairs that holds AMEC’s purse strings. But the foreign affairs ministry eventually released the required NOK 20m ($3m) in April.

According to Norway’s AMEC head Ingjerd Kroken, a meeting of AMEC’s principals – which include the United States, Russia, Norway and the United Kingdom – is to be held in Murmansk later in September and will establish Norway’s future role in AMEC. The meeting coincides with AMEC’s 10-year anniversary.

“With the K-60 project complete, the principals will discuss the future now,” said Kroken in a telephone interview with Bellona Web. She added that Norway’s continued involvement in – or disengagement from – AMEC projects “is one of the main items on the agenda” for the AMEC Principals’ meeting. She added that she hoped for Norway’s continued involvement in AMEC.

Because of AMEC’s long engagement in Northwest Russia as both a military and environmental presence, said Kroken, it has developed a level of trust among relevant Russian officials, who are usually distrustful of their western counterparts. Some sources say that this level of trust is unparalleled by other government departments that would presumably take over AMEC Norway’s duties – namely the Ministry of Foreign Affairs.

Kroken would not say whether she thought the foreign affairs ministry could have handled the K-60 project more effectively than AMEC. But she did indicate that the cooperation of the Russian Northern Fleet in the project was “very good.”

“AMEC is an environmental and military organisation that has built confidence over the iast 10 years, so (the K-60 project) went smoothly,” she said.

Good weather and good transport time
According to de Groot, the project of removing the K-60 was completed five days ahead of schedule. He described the whole operation as “very favorable,” and said that the project, especially using information about the optimal weather patterns for undertaking the the transport, was groundbreaking and should set a precedent for similar operations in the future.

“July and August are the best months for [these operations]. We proved that,” said de Groot.

According to de Groot, Dockwise and Norwegian AMEC officials will be meeting in Murmansk on Thursday to finalise some contractual formalities, thus ending Norwegian AMEC’s involvement in the K-60 project.

Dutch technology
Dockwise used one of its unique so-called heavy transport vessels that had the ability to submerge its specially fitted deck beneath the K-60 and then blow its ballast tanks and rise again to the surface with the K-60 secured in special above-water cradles to hold its fragile hull. The K-60 was then ready for transport and well-guarded against tumultuous waves and poor weather that are the plague of more traditional and far less safe transport methods used by the Russian Navy.

A derelict and rusted-out submarine known as the K-159 succumbed to disastrous circumstances while it was being towed from the Gremikha base to Polyarny with 800 kilograms of SNF and 10 crewmembers aboard.

When the vessel and its tug-boat ran into heavy weather on August 28th 2003, the towline snapped. The K-159 – held barely afloat by rust-eaten pontoons that were ripped away by the storm and already itself riddled with leaks – sank in 240 metres of water. One crewmember survived.

Even though the K-159 was a Russian project, the incident provoked an international re-evaluation of how donations to nuclear remediation projects in Russia are developed and approved. Norway came under special scrutiny when its was revealed that Norway had reimbursed Russia for the same shoddy towing method for two submarines that had already been transported for dismantlement on Norwegian funding.

Plans to lift the K-159’s remains were forwarded by Russia’s Malakhit and the Dutch firm Mammoet in 2004, but the estimated EUR 50m project is still out of Moscow’s reach and the sub still lies on the ocean floor.