In what could be a profound step toward cooperation between Russia and the international environmental community, the Ministry of Atomic Energy, or Minatom, has drafted a so-called strategic master plan for dismantling ageing nuclear submarines, Minatom and European officials have said.

Published on January 12, 2004 by Charles Digges 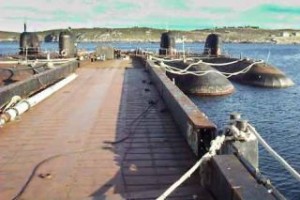 The first phase of the plan was presented at a December 15th meeting of Northern Dimension Environmental Partnership, or NDEP, donor nations and European Commission entities, which had gathered in London to discuss funding priorities for internationally funded nuclear remediation projects in Russia.

The Russian plan will be presented to NDEPs Nuclear Operations Committee for final approval on February 2nd.

NDEP holds a fund in the European Bank of Reconstruction and Development, or EBRD, which focuses its efforts on funding clean-up of environmental problems in Northwest Russia. Earmarked within the fund is a so called nuclear window, containing funding for nuclear clean-up and remediation. This fund, according to the EBRDs Vince Novak, who oversees the banks Nuclear Safety Division, now stands at some EUR160m.

In a telephone interview with Bellona Web from London, Novak called the December 15th presentation of Russias master plan, entitled the Terms of Reference, a thaw in Minatoms relationship to foreign nuclear aid.

MNEPR was the key
The signing last May of the Multilateral Nuclear Environmental Programme in the Russian Federation, or MNEPR was a stipulation imposed on Russia by NDEP before it would release any funding. At that time, the fund stood at EUR62m, which had been contributed by NDEPs original founders, Denmark, Finland, the Netherlands, Norway and Sweden.

The MNEPR accord was signed by Finland, Sweden, Norway, Denmark, the United Kingdom, Germany, France, Belgium, the Netherlands, Russia, and European Commission officials. It was also signed by the United States, but only on the condition that MNEPR protocols on liability—which Washington regards as too lax—be separated from the main document itself, which US representatives did not sign.

Nonethelesss, NDEP-held coffers have ballooned to more than EUR$160m earmarked exclusively for radioactive environmental clean-up and security in Northwest Russia. The eight donor nations and European Entities, which include Russia, are responsible for prioritizing how the money is used. NDEPs membership has also grown, with the inclusion of France, the United Kingdom and Canada.

On December 27th, the MNEPR accord was swiftly adopted by the out-going Russian State Duma, after it was submitted to the parliamentary body by the Government of Vladimir Putin. Although this passage can be construed as a straight-jacketed, Kremlin-loyal Dumas act of fealty to its president, Bellonas Alexander Nikitin said that MNEPR still made it into the lawbooks, regardless of how environmentally unenthusiastic the new Duma will be.

It at least gives us a legal structure in which to work, said Nikitin. Even though the Duma may have just been making a present to Putin to boost his prestige, environmentalists have to think of it as a victory on a practical rather than a political level.

A Major Breakthrough
The breadth of Minatoms master plan announcement came as a surprise to many observers, who say it is a crucial step toward facilitating a safer climate for Western funded nuclear dismantlement projects in Russia—especially the dismantlement of derelict submarines. The plan, as proposed by its Minatom authors, who European sources say worked closely with the EBRD and NDEP, allows for tighter scrutiny of foreign funded nuclear dismantlement projects before they begin, and mandates higher levels of transparency, accountability and access for donor nations while the projects are underway.

Minatom was, in fact, ordered by a Russian governmental decree in September 2003 to develop a master plan for submarine decommissioning by May of this year. It had been anticipated that Minatom, which controls most foreign funding that pours in for nuclear remediation projects, would shun such scouring audits and transparency required by any notion of a master plan. But the master plan presented by Russia at the December 15th NDEP meeting exceeded the expectations of even optimistic observers.

This represents a major breakthrough, said Novak in a telephone interview with Bellona Web from London. The EDRD and NDEP representatives had worked closely with Russia on the formulation of their submarine dismantlement plan.

Novak said that EBRD and NDEP input was well received by Minatom, especially by First Deputy Minister Sergei Antipov, who Novak has characterised as part of a younger generation of Minatom management that is less entrenched in the old-school Soviet bureaucracy of the ministry.

Personally, I am absolutely delighted—until the middle of last year, the ministry was not interested in a wholeistic approach, to foreign aid coordination, he said. I am especially impressed with the team Minatom has assembled.

This team, which will be responsible for implementing the master plan, is headed up by renowned Russian Academician Ashot Sarkisov. He will supervise a consortium of institutes including The Russian Academy of Sciences Nuclear Safety institute, or IBREA RAS, the Kurchatov Institute, and the Minatom Research and Development Institute of power and engineering, or NIKIET. 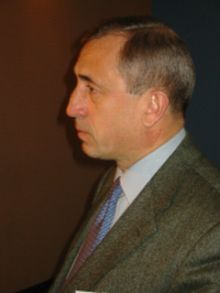 Minatoms statements on the master plan
In a recent interview with the Nuclear.ru website—which is partially sponsored by Minatom— First Deputy Minister of Atomic Energy Sergei Antipov indicated the ministry was ready to take bold steps to implement the plan and facilitate NDEP-sponsored nuclear clean-up programmes.

The most important project today is the drafting of a general master plan for radioactive ecological problems in the north-west of Russia, he said. Such a master plan is necessary in order to have a complete picture of all the problems and work, the consistency of their solutions, and the cooperation between separate projects, contracts and donors.

Antipov indicated the importance of forming an expert assembly of a very highly competent group of representatives from each of the donor nations that would oversee the prioritization and expenditure of NDEP funding.

In order to manage this money in the first place, it is necessary for the NDEP fund to make certain decisions about and organise the corresponding structures, including a strategic committee and a managing committee NDEPs nuclear window, he said. Considering that Russia is the defining link in the nuclear window projects, meaning that Russia decides which particular projects should be the first to receive funding of course, this should be done by a representative of Minatom.

Antipov went on to say that the coordinating committee for the master plan would be formed rapidly—by the end of January or by early February and would be more or less de-facto. According to Antipov and European officials, this approach was approved at the December 15th donor nations assembly.

What is the most important agenda item for the master plan?
In his interview with Nuclear.ru, Antipov identified the master plans most pressing agenda item as further development of the plan itself. Firstly, he said, the plan must encompass a complete picture of all ecological problems and planned work, the consistency of their proposed solutions, and an assessment of cooperation between separate projects and contracts of donor nations.

This is very serious work, said Antipov. We must note that the master plan is a dynamic, living organism that will change, correct itself in accordance with work being carried out or new conditions and factors that will arise

European Reaction
Antipovs words were almost an echo of the conclusions reached by European parliamentarians and Russian representatives at the Inter-Parliamentary Working Group, or IPGW, hearing in Brussels on November 26th.

The IPWG was created with Bellonas help in 1998 as an effort to bring Russian and European parliamentarians together to solve pressing issues of radioactive pollution in Russia. Novembers IPWG meeting, entitled How to Coordinate International Environmental and Non-Proliferation programmes in the Russian Federation, brought together 27 of these decision makers.

The close proximity of Antipovs language to that of those present at the IPWG conference is not surprising given that many of these same European representatives had been aiding Russia in the formulation of the sub decommissioning master plan prior to the November meeting.


According to officials who had seen the Terms of Reference developed by Russia, which have not yet been made public, the documents main aim is stated as the ultimate long-term strategic goal of the strategic master plan whose implementation is to eliminate threats for the public, personnel and the environment by complete decommissioning of nuclear submarines, ships and service vessels taken out of operation, and by environmental rehabilitation of all related radiation dangerous facilities in Northwest Russia.

Those officials acquainted with the document who spoke to Bellona on the condition of anonymity said this goal will require several specific steps, but will overall correspond with the demands of Novembers IPWG meeting.

European officials said that at one part, the Terms of Reference read: All existing data on the current status of decommissioning and environmental rehabilitation objects will be collected, completed, reviewed and updated, Existing data related to the environment, personnel, and local population will be collected and reviewed as well. Major findings from the experience of compete or ongoing projects will be reviewed.

The document, said the officials, also addressed one of the main concerns of the IPWG—that independent organisations be allowed a place in the decision making process.

In order to ensure adequate objectivity and credibility of the findings and recommendations, external reviews will be conducted on an as needed basis by independent organizations and international experts not involved in project implementation, officials familiar with the document quoted it as saying.

The Terms of Reference document also includes sections on where the master plan will fit in to Russia and international nuclear legal and regulatory framework; an overview of decommissioning and environmental rehabilitation practices and directives for their optimization; identification of hazards in existing programmes; developing a criteria for identifying high-priority tasks; implementing the most pressing of those tasks; analysis of weak points within the strategic master plan itself, and drafting terms of reference for phase two of the master plan.

The officials acquainted with the document said phase one would be complete within five months.

The spectre of Minatom
Nonetheless, as Antipov noted, Minatoms development and implementation of this master plan still leaves Minatom in the drivers seat where it comes to prioritizing issues—a position it has occupied since the first nuclear remediation projects began in 1992.

Recent million dollar funding missteps discovered by Russias presidential Audit Chamber and publicized by Bellona give pause to many ecologists and environmental organizations, who—and not without reason—view Minatom as an unreformable promotional agency for the nuclear industry with little interest in clean up activities.

But the EBRDs Novak, while acknowledging that such old-guard, Soviet-era elements still remain firmly entrenched in Minatoms upper eschelons, younger ministers like Antipov and Sergei Agapov are, in his view, firmly committed to the ideals spelled out in the Terms of Reference.

Even Minatom Chief Alexander Rumyantsev himself, Novak has said, seems amenable to the terms of the environmental community, and is the first Minister of Atomic Energy to hold semi-regular meetings with members of the Russian environmental movement.

Rumyantsevs offices would not comment on the contents of this conversation in any way. But if even the basic drift of what Rumyantsev was quoted as saying is true, it opens a tremendous window of opportunity for transparent dealings with western donor states and could signal an end to Minatoms historical hostility to NGOs and pave the road for cooperation.