US sponsored defueling site approved for operation in Severodvinsk

Published on April 8, 2003 by Vladislav Nikifоrov 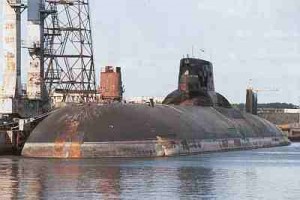 The site has passed its final tests and is now ready for full-scale operation on defueling the laid-up nuclear submarines.

A special interdepartmental commission took part in comprehensive tests, and then monitored spent nuclear fuel unloading from Typhoon class submarine — TK-202 — which has been laid up in Severodvinsk since July 1999. It was the first defueling operation carried out by Zvezdochka personnel. It took almost three months to unload the submarine reactor core using the new technologies.

Before defueling operations in Severodvinsk were carried out at the military site coded “09”. The fuel casks were first loaded onboard Malina class ship PM-124, which has been in operation for 20 years without overhaul repairs. Then an old crane — DPK-125 — in a very bad state of repair took empty TK-18 transport containers and placed them into compartment four onboard PM-124 — one at a time. TK-18 was then loaded with fuel and, with the use of crane DPK-124, was transferred into railway car. The site had no pad for intermediate storage of TK-18 containers and hardly met requirements for safe management of spent nuclear fuel.

February 13th, the Interdepartmental Commission concluded in Moscow that defueling complex at Zvezdochka “is allowed for permanent operation.”

Starting in 1992 and until 1997, CTR has been delivering equipment for scrapping ballistic missile submarines (SSBNs) to Zvezdochka in Severodvinsk, Nerpa at the Kola Peninsula and Zvezda shipyard in the Russian Far East. The equipment was used to dismantle five SSBNs. After 1997, CTR started to contract directly with the shipyards themselves and funded the dismantlement of submarines, as the scarce Russia’s budget would not let the work to proceed.

In 1998, due to the lack of defueling capabilities and storage space for spent nuclear fuel, US officials granted CTR a waiver of the non-reprocessing policy. It was agreed that CTR would fund shipment of spent nuclear fuel to the Mayak reprocessing plant from 15 SSBNs dismantled on CTR’s money. But funding of shipment to the Mayak plant was still not enough. New infrastructure was to be created to ensure that defuelling SSBNs, including Typhoons, could be carried out.

The USA via Cooperative Threat Reduction programme, or CTR, funded the construction of the unloading site in consent with a contract signed on May 29th 1998.

The brand new $15 million defueling site sponsored by the USA is located at Zvezdochka shipyard. It is equipped with an 80-tonne crane, an intermediate storage pad for 12 fuel transport casks, a parking area for railway transport cars, and a building where the fuel is transferred to casks. The annual capacity of the site is four Delta class or two Typhoon class SSBNs. The site, however, cannot deal with damaged reactor cores, thus the condition of fuel in laid up submarines should be verified before they are placed for defueling there.