Japanese officials have confirmed Tokyo’s intention to begin dismantlement work on 41 tactical and general-purpose submarines of the Pacific Fleet which have for several years remained afloat with their reactors still loaded with nuclear fuel, a Japanese government official said Wednesday.

Published on January 17, 2003 by Charles Digges 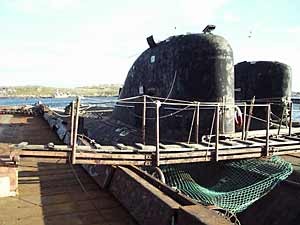 The announcement that Japan would renew its nuclear weapons reduction programme in the Russian Far East — which had been suspended last spring — came over the weekend during a summit between Japanese Prime Minister Junichiro Koizumi and Russian President Vladimir Putin, during which the two leaders discussed several nuclear issues.

Tokyo had suspended $168m in funding from the Japan-Russia Committee for Cooperation in Reducing Nuclear Weapons following secrecy concerns levelled by Moscow in the wake of the Grigory Pasko case. As a result, Japanese officials said Russia refused to furnish information necessary to accurately evaluate funding needs.

Japan was also concerned by bureaucratic disorganisation on the Russian side. But Koizumi agreed to take down bars to funding after Moscow promised to establish a governmental oversight body, headed by Russian Prime Minister Mikhail Kasyanov, to coordinate Russia’s decommissioning efforts.

Although Japanese officials caution that the funding on offer will not dismantle all of the subs — and some of the funding will be used for other nuclear safety related problems — it nonetheless represents one of the first international efforts geared towards reducing the growing number of dilapidated and rusting non-strategic vessels whose decommissioning is not covered under funding supplied by the US Cooperative Threat Reduction Act, or CTR, programme.

The funding release will also give Russia’s Atomic Energy Ministry, or Minatom, an opportunity to make good on claims it has been making since last summer that it wants to reduce nuclear risks in the Far East by addressing the problem of these submarines.

By 2010, the Russian Navy expects to dismantle a total of 131 submarines. Minatom has estimated that it will cost $3.9bn to meet that task — with a start-up cost of $60m for last year alone. But for this year, Moscow budgeted just $70m toward improving nuclear safety throughout the country as a whole, meaning that the dismantlement effort is off to a shaky start.

In the Pacific, 77 retired submarines are currently awaiting decommissioning. Of those, 41 are still afloat and loaded with spent nuclear fuel.

Of these 41 submarines, 39 have hulls so corroded and rusted that many cannot be safely towed to the decommissioning point at the Zvezda plant at the Bolshoi Kamen base for fear that they would sink en route.

Many of them are at risk of sinking at their docks as it is, and two already have — one in 1997, the other in 1999. Both were quickly raised by the navy, which claimed no harm had been done. But these incidents underscore the urgency of the problem.

The Pacific Fleet’s ailing submarines are spread out over several thousand square kilometres at bases from the Primorsky Krai, to Kamchatka to the Khabarovsky Krai. One plan — forwarded by Minatom’s Institute for Energy Equipment Research and Design at a decommissioning conference last summer — is to corral these submarines into a specially-built shelter to store them until the fission capability in their nuclear reactors ends in about 300 years, essentially leaving them untouched for generations and hoping for the best. Minatom plans to launch construction this year of a $70m facility that would accommodate 19 sub reactors.

Whether Japan will participate in that project is open to question.

For now, a Japanese government official told Bellona Web, Tokyo will begin by dismantling one Victor-III class submarine as a “pilot project” to gauge costs and materials before extending decommissioning efforts. Dismantlement of this submarine — the B-412 — was in the offing when Japan suspended the programme’s funding.

The Japanese government estimated in the year 2000 that the cost of dismantling a general purpose submarine, or SSN, to be between $5m and $10m, but the official interviewed by Bellona Web declined to be more specific.

According to senior CTR officials, estimates for dismantling an SSN are around $6m — assuming the dismantlement takes place in Northwest Russia, where a sufficient decommissioning infrastructure is already in place. By comparison, these same officials indicate that a Typhoon class ballistic missile submarine costs $13m to take apart in Northwest Russia.

But, as the Japanese official pointed out, the Pacific Fleet’s infrastructure is not nearly as developed as the Northern Fleet’s, making the task of dismantling subs and storing and transporting SNF much more difficult. Because of this, the official said, costs will likely vary when considerations for building surrounding infrastructure are taken into account. Japan-Russia Committee, the official said, will hold a tender for the decommissioning contracts.

Since 2000, though, the Zvezda facility has received upgrades, thanks to CTR and an onshore defueling site will be completed with US cash later this year. But the future of Zvezda is uncertain.

Since 1995, the facility’s work has been sustained largely by American funding. The plant was given contracts by CTR to cut up Pacific Fleet ballistic missile submarines that targeted the United States.

But the supply of strategic submarines is limited and CTR contracts for the Zvezda will eventually run out, leaving the plant in a financial lurch before one of the biggest environmental and threats is eliminated.

In this sense, the funding from Japan should breathe new wind into Zvezda’s sails as the most likely site to do away with remaining submarines.

The Japanese Government official also said that — as another effort to beef up decommissioning and waste management infrastructure — some of the funding will likely be applied toward improving railroads in the Russian Far East to ensure safe transport of SNF.

At present, SNF taken from submarines is sent to the Mayak reprocessing plant in the southern Urals. But, according to Minatom’s International Centre for Environmental Safety, the navy can’t scratch up a mere $7m to repair a 27-kilometre stretch of railroad track that connects its waste storage facility at the tip of the Shkotovo Peninsula — where spent fuel assemblies from Zvezda are sent after they are removed from subs — to the nearest railhead to ship the SNF off.

For now, the waste is delivered over a rough road in trucks that have been known to leak, and naval officials confirmed the road is shut a number of times a year while technicians deal with the consequences of small-scale spills.

But even the future of these shipments is now in question with Monday’s revocation of Mayak’s operating license by Gosatomnadzor.

This could mean — at least temporarily — an increased burden for Shkotovo and the Pacific Fleet’s other waste storage facility, on Kamchatka, both of which suffer from space shortages. Construction of a proper buffer storage for spent nuclear fuel accumulated in the Russian Far East could be a way out.