The Nunn-Lugar act is fighting for its very existence as its supporters battle opposition on Capital Hill to giving the US President permanent authority to waive the requirement that the chief executive sign off annually on the activities of the 11-year-old American-Russian nuclear non-proliferation effort, a US government official told Bellona Web in a telephone interview Friday.

Published on October 7, 2002 by Charles Digges 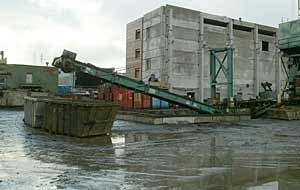 "We’re fighting to save Nunn-Lugar every day. People are fighting us all the time, primarily in the House of Representatives," the official said. "What we need is something big, something big to bring these peoples’ attention to this problem, because it’s not going away."

Asked whether the debate had reached a level of bipartisan bickering, the official wryly answered: "No, it’s the Republicans," who can’t seem to come to an agreement on the issue.

The official and analysts point out that congressional and administration Republicans are not necessarily involved in a stone-walling effort to kill Nunn-Lugar, but that the Republican administration of President George Bush is itself bitterly divided about the future of the joint US-Russian non-proliferation programme.

On one side, the government official said, there is the president and a number of his advisors who want Congress to pass a permanent waiver, granting Bush the authority to disburse funding for Nunn-Lugar without an annual review of Russia’s "commitment" to its stated non-proliferation goals, as federal law currently requires. On the opposing side are arrayed other administration advisors, mostly Pentagon and State Department brass, who oppose bypassing the yearly progress evaluation of Russia’s dismantling of nuclear and biological weapons as a precondition to US expenditures that aid the programmes.

"Parts of the administration do not really care if the programmes are shut down because they have always been sceptical of their value," said Jon Wolfsthal, a former US Department of Energy (DOE) official who is now a non-proliferation expert with the Washington office of the Carnegie Endowment for International Peace. "Those portions of the administration that are pushing for the permanent waiver are doing so as part of the traditional battle with Congress over White House authority, while others are acutely aware of the risks."

What could be at stake in this political melee is a programme that has since 1991 — with the help of the DOE’s related non-proliferation efforts — supported the destruction of the former Soviet Union’s nuclear arsenal.

According to the US government’s Defense Threat Reduction Agency website (http://www.dtra.mil/ctr/ctr_score.html), as of July 7th 2002 5,970 nuclear warheads have been deactivated, 1,269 ballistic and long-range nuclear cruise missiles eliminated, 829 missile launchers destroyed, 97 long-range bombers eliminated and 24 ballistic missile submarines destroyed. In addition, thousands of former Soviet weapons scientists have been supported by US funds in non-weapons related research.

The waiver debate, therefore, is a piquant moment for the administration, which itself in March declined to certify Nunn-Lugar — officially known as the Co-operative Threat Reduction Act, or CTR, and run by the Pentagon — over concerns that Russia may still be developing non-conventional weapons. Bush finally signed a temporary waiver in August, giving CTR three months to start spending some $450 million budgeted for its non-proliferation programmes in Russia before the close of the 2002 fiscal year, which came on October 1st.

But Bush’s current overtures toward attacking Iraq, and his open appeals to Congress for the waiver, have intensified the dilemma: on the one hand, the administration justifies military action against Iraq as a pre-emptive strike on Saddam Hussein’s apparent stores of chemical weapons and incipient nuclear weapons capabilities. On the other, expert opinion holds that Iraq’s nuclear capabilities are negligible unless it gets its hands on poorly secured fissile material from a third country, like Russia — just the kind of material CTR, and a permanent waiver for its activities, are designed to secure.

The effect is that Bush’s own political endorsement of those elements in his administration that encouraged him not to certify Nunn-Lugar this year may have become his biggest obstacle to one of the most effective methods of stemming the threat of nuclear terrorism — not just from Iraq, but worldwide.

But the largely Republican hostility to CTR, said the government source, is nearly intractable in its opposition, and Senator Richard Lugar — himself a Republican from Indiana who co-authored the CTR act in 1991 with Georgia Democrat Sam Nunn — is taking centre stage in this White House vs. Congress debate.

"Senator Lugar is saying that poorly-secured weapons of mass destruction in Russia are a national security issue — not only for the United States but for the world, for our allies in Europe, for NATO and others, for our allies in Asia."

The CTR cause has also courted — and received — the warm support of America’s most influential newspapers. One day early last month, the Washington Post devoted its lead editorial to supporting the permanent waiver. The New York Times editorial page followed suit last week.

"Congress should grant President Bush the permanent authority he seeks to waive conditions that have slowed the flow of money to Russia for safeguarding dangerous materials," wrote the Times.

"But the most important missing ingredient is sustained, high-level attention to a danger that virtually everyone agrees is there. An administration that is putting such intense effort into planning for war in Iraq and bolstering homeland security can surely pick up the pace on the much easier and cheaper task of safeguarding materials that could prove devastating in the wrong hands," the Times concluded.

USA Today featured a page one article last week that chided Congress over the waiver issue by reporting on Russia’s virtually unsecured stocks of chemical weapons at a Urals warehouse in Shchuchye. But even the austere opinion of the leading broadsheets seems to be having little effect on Capital Hill opposition.

In the face of the threat of terrorist nuclear or chemical attacks — especially after the events of Sept. 11 made clear how easy such attacks could be — the government official said it was baffling to see such opposition to the permanent waiver, and the nearly blind resistance to the Nunn-Lugar programme on the floor of the House of Representatives.

"When Senator Lugar sits down with representatives of the opposition and tries to explain the implications to US security and world security, about the proliferation of weapons of mass destruction, and the world we are facing, they listen politely and nod," said the official.

"And then, all of the sudden, they say Well, no. And we say, Well, the president wants the waiver to happen, and they have full respect for the president but they think he is wrong on this issue. It’s mind-boggling."

Indeed, the prospects of CTR making even deeper, more successful inroads into non-proliferation have never seemed better than they did this year. In July, G-8 member countries, during their Canadian summit, pledged to provide $10 billion over the next 10 years to continue the kinds of programmes sponsored by CTR. The United States pledged another $10 billion.

According to a report in the Global Security Newswire, or GSN, Senator Lugar outlined a "top ten list" of how that money should be spent in the former Soviet Union over the next decade.

According to non-proliferation experts, however, CTR is not likely to get a permanent waiver in the Defence Appropriations Bill for 2003, and will, once again, have to apply for re-certification of its programmes, which — unless the certification is granted more or less immediately — will set back its activities by eight to 10 months into the new fiscal year, as happened this year. Lacking this certification, roughly one third of CTR’s activities controlled by the US Military shuts down.

But the consensus among analysts is that the debate goes beyond granting waivers to the president and extends to arguments about whether the Nunn-Lugar programme should exist at all.

"I think that some type of waiver will be granted but it won’t be permanent," said Kenneth Luongo, executive director of the Russian American Nuclear Safety Advisory Council, or RANSAC, in an email interview with Bellona Web. RANSAC is a non-governmental organisation that advises both the US and Russian governments.

"I really don’t think that CTR is in mortal danger but a can of worms has been opened by this administration and it is being exploited on the Hill," said Luongo.

Luongo noted that the conferences between the House of Representatives and the Senate on the Defence Authorization Bill were closed sessions, but that news that tricked out of them when they ended indicated that a permanent waiver for CTR was not in the offing, but rather one that had time periods for re-certification built in.

He added that there may also be some temporary relief from the conditions Congress placed on the expenditure of funds for chemical weapons destruction. "It won’t be much, but enough to allow the programme to limp along and not have to shut down," said Luongo.

Luongo’s version of the House-Senate conference was confirmed by the government official.

Wolfsthal, however, said that missing the permanent waiver this year could cripple CTR, especially in the field of chemical weapons liquidation.

"But if it is a temporary waiver — one to three years — then it will be hard to convince Russia to invest the resources it needs to provide over the long term for the project to be successful." Asked if he thought the programme as a whole was in danger of grinding to a halt over the waiver debate, he said: "Yes, without a doubt."

"If the programme shuts down, it may never be restarted," he said.