Gadzhievo would have voted ‘no’ to reactor storage

Citizens of a small naval town at the Kola Peninsula were not allowed to cast their vote Sunday against planned reactor sections storage site; chain reaction of population protests may be a follow up. 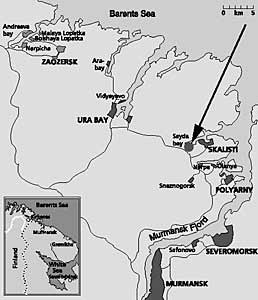 For the inhabitants of Gadzhievo, a remote naval base city at the Kola Peninsula, only one question would have been of more importance than the name of the next Russian president on Sunday. A proposed onshore storage site for reactor sections in Sayda Bay – just over the hill from their neighbourhood – was of a bigger concern. The plan has met tremendous local protests led by the city council. The outcome was a proposal filed on January 21 to put this issue on local referendum at the day of the presidential elections in Russia. The question to answer sounded scary: "Do you want nuclear-hazardous items stored in you neighbourhood?" The City Court of Gadzhievo, however, overruled the decision on March 23.

"The city council decided to obey the decision and not to arrange referendum this time," said Vladimir Musakyan, the chairman of the local city council, to Bellona Web. "We are going to evaluate now our position and decide what we shall do next," Musakyan added.

The administration of the Murmansk County was sceptical to the whole idea of referenda when reached by Bellona, saying that it would have no effect on the eventual decision regarding the location of the storage site. The finally outlined proposal for the storage location is said to come shortly.

Chain reaction of protest
The initiative to hold a referendum may launch a chain reaction of protests from other communities at the Kola Peninsula. Storage sites for radioactive waste and spent nuclear fuel are to be built at several other locations in the area, and the radiation safety concerns are a growing issue among the population. The upcoming matter for possible uproar is a proposed storage pad for casks with spent nuclear fuel to be constructed at the nuclear power icebreaker base in the vicinity of Murmansk, a city with half a million inhabitants.