Reactor compartments to be stored onshore

A proposal to establish a new onshore storage site for submarine reactor compartments at the Kola Peninsula met protests from the local population; goes ahead anyway. 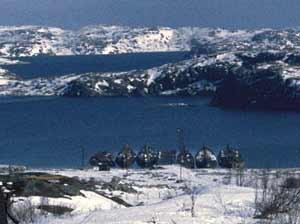 The plans of the Russian Northern Fleet to establish an onshore storage sites for reactor compartments that derived from decommissioned submarines met protests from the neighbouring city of Skalisty (Gadzhievo) at the Kola Peninsula. The local city council said it intended to put the issue on referendum, while the regional authorities of the Murmansk County tried to seek solutions.


The storage site in question is a place called Sayda Bay – a former fishing village that was annexed as a military area in 1990. The area is now used for storing reactor compartments from scrapped nuclear powered submarines. Currently there are 25 compartments afloat tied to piers in Sayda Bay. The designers of this site said the compartments could be stored at the piers for a period of up to 10 years. Sayda Bay is the central storage site for reactor compartments in north-west Russia. They are towed here both from the shipyards at the Kola Peninsula and from Severodvinsk in Arkhangelsk County.


To store the reactors afloat is an unsafe procedure that prompted the Northern Fleet to establish an onshore storage site in Sayda Bay. Northern Fleet officials said the onshore site would be designed to take 77 reactor compartments from decommissioned submarines.


But the city council of the town of Skalisty (Gadzhievo) went against the proposal. The members of the council say that the city boarder of Gadzhievo lies only 2-2,5 kilometres from the planned storage site and it creates grounds for concern among the local population.


A commission headed by the vice-governor of Murmansk County was established to examine the matter. The conflict is presently frozen while the parties are waiting for results from en environmental impact study and detailed description of the technical part of the project.


The Russian Northern Fleet has been looking for a storage place for reactor compartments the past 6-7 years. Another alternative proposed earlier was to use three tunnels blasted out at the naval base in Ara Bay at the Kola Peninsula. The tunnels were originally thought to become a hiding place for nuclear powered submarines. But they have never been used according with their intended purpose. The establishing of an onshore storage site in Sayda Bay has more realistic perspectives being considered to be relatively safe and, more important, cheap in comparison to other options.