CHELYABINSK – Hundreds of people, victims of the original Chernobyl, gathered here in front of this city’s Ministry of Social Relations two days ago to commemorate their losses, to mark survival, to protest and be heard in front the anonymous bureaucracy that has refused to acknowledge their presence – or why they would, in fact, be there in the first place.

Published on October 2, 2008 by Yelena Yefremova, translated by Charles Digges 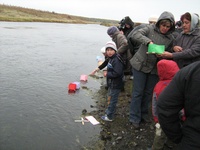 The occasion was the 51st anniversary of what came to be called the Kyshtym disaster – a sort of dry run and unheeded warning within Russia’s nuclear industry for the Chernobyl disaster 29 years later – when a waste storage unit at the Mayak Chemical Combine exploded and spewed radioactivity over 20,000 square kilometers.

But this was no Chernobyl. This disaster took place deep in the belly of Russia’s atomic beast in 1957, and there was no one from within the country or abroad to sound the alarm. Instead, the location of the accident, the secret city of Ozersk, was wiped out in government official-ese and re-dubbed official memory as Kyshtym accident after a small village nearby the catastrophe. 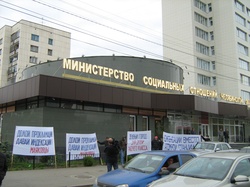 But when environmentalists and Muslyumovo residents themselves are asked, the advertised move has been nothing but window dressing. New Muslyumovo is a mere two kilometers from the same radioactive river they were trying to escape. The houses themselves are small and cold, and only 12 families from Muslyumovo have taken up residence in the village’s new namesake.

Nevertheless, residents of neighboring villages far from the contaminated Techa River – villages such as Bradokalmak, Russkaa Techa, and Nizhnypetropavlovsk – envy Muslyumovo residents: they at least have some chance to escape the contaminated region.

Many children fro Muslyumovo and surrounding areas attended the meeting of mourning, and, despite their young age, they clearly understand they live in a wasteland.

“We don’t know one family where somebody doesn’t have cancer. And many of my classmates have bronchial asthma,” said one 12-year-old.

Those at the meeting had unkind words when recalling hoq Russian Minister of Health and Social Development Mikhail Zubarev who, with the sweep of a pen in 2006, annulled the list of those suffering from illnesses connected with radiation. Those at the meeting said that now it is nearly impossible to prove that any illness one may suffer from is connected to radiation.

When dusk began to settle over the countryside, 217 little boats, each bearing a candle, were launched onto the water. Exactly 217 villages disappeared from the face of the map after the 1957 tragedy.