MUSLYUMOVO, Southern Urals – The first some residents of this small, contaminated village near the Mayak Chemical Combine ever heard of the devastating nuclear accident that occurred here 50 years ago on September 29th was in the 1990s.

Published on September 28, 2007 by Rashid Alimov

The incident – which has only been outdone in the history of nuclear power by the Chernobyl disaster of 1986 – is known officially as the Kyshtym accident. But that is misleading, a hold over twist of the Soviet nuclear tongue to disguise the location of where the accident actually took place: Ozersk, the secret town were the Stalin built his first atomic bomb, and home to Mayak, the facility that made it possible. Kyshtym was just the only nearby town that was on a map, so it made sense to the Soviet nuclear machine to say the accident emanated from there – much to the bewilderment of Kyshtym residents.

The village of Muslyumovo was directly in the path of the fallout of the 1957 explosion of a container holding highly radioactive waste at the Mayak Chemical Combine. Some 20,000 square kilometres settled by 270,000 people was left radioactively contaminated. While maintaining secrecy about the cause, the Soviet government resettled the populations of many of the small villages just inside the southern Siberian portion of Russia that surround Mayak, in the Chelyabinsk Region.

But in Muslyumovo’s case, only the part of the inhabitants – the ethinic Russian ones – were immediately resettled. The remainder – Muslim Tarters – were left to fend for themselves.

Today, the combine, which reprocesses some 200 tons of spent nuclear fuel to obtain plutonium per year, continues to dump liquid radioactive waste into surrounding water bodies. The waste eventually ends up in the Techa River, which runs right through Muslyumovo. Unaware of the dangers in the tiny Muslim enclave, but fully conscious of the ravages brought on her home in the war-torn separatist Muslim enclave of Chechnya, Dashubik Menzhayeva took her two children and moved 1,000 kilometres Northeast to Muslyumovo to live with relatives.

“When I moved here in 1996, I didn’t know there was radiation here. But even if I had, I didn’t have anywhere else to go,” said Dashubik.

Dashubik, whose legs went numb from a nerve disorder after the bombardment of Grozny, the Chechen capital, moved in with her sister in Muslyumovo.

The smattering of Chechens who have moved there, fleeing the genocidal Kremlin-driven violence of their region that has been raging since 1994, would seemingly fit in with the Muslim population of Muslyumovo. But the Menzhayevas nonetheless report a feeling of alienation from their fellow residents.

Dashubik’s sister, Ayznat, and her husband have lived in the village since 1987, when they moved there after they graduated from vocational school. They have three children of their own, and their youngest is in the third grade here.

“We didn’t hear anything about the (radiation) dangers until my sister came,” said Ayznat in an interview in her home with Bellona Web.

“We didn’t know anything in 1987 and thought we had lucked out – there was no work in Chechnya then. If we had known, we would have left immediately. My husband worked on construction sites all around the region. We had our choice of places to settle.”

The village of Muslyumovo is still inhabited primarily by Muslim Tartars and is located on the banks of the contaminated Techa River. About 10 percent of the locals are Russian.

The village residents only began hearing about what had happened at Mayak in the 1990s in the post-Glasnost era. And only then did they start hearing about what goes on at the Combine. Before that, the government had kept its lips sealed about the secret nuclear installation where Russia developed its first atomic bomb. After the accident in 1957 – which was topped only by another Soviet nuclear disaster, Chernobyl in 1986 – many villages in the area were evacuated. 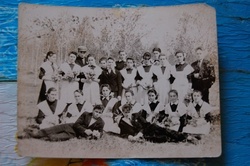