Tender to Solve the Mayak Problem

ST. PETERSBURG—A working group set up by order of new Rosatom head Sergei Kirienko to solve environmental problems at the Mayak Chemical Combine has started work in Chelyabinsk Region where the complex is located and the group held its first meeting on January 18th. The next one is slated for February 10th.

Published on January 31, 2006 by Vera Ponomareva 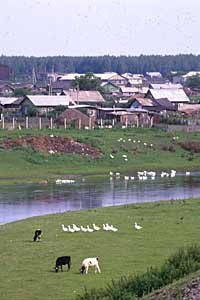 The working group includes representatives of Rosatom and NGOs Planet of Hopes, the Movement for Nuclear Safety, Green Cross, and Protection and Security.

Environmentalists and rights activists, who have long been critical of inaction by officials and the Mayak leadership, are now to be involved in solving the Mayak problem for the first time.

We hope that this experience of working together will prove positive, and are determined to develop it and apply it not just at Mayak, said working group chairman Igor Konyshev, an advisor to Kirienko, in a telephone interview with Bellona Web.

The working group’s main task will be to hold a tender to find the best project to solve social and environmental problems associated with the plant.

Rosatom has allocated 250 million roubles to solve problems at the Techa reservoir chain, Movement for Nuclear Safety President Natalya Mironova told Bellona Web. Kirienko has decided to spend 12 million of this sum on working together with NGOs to reduce social tensions and diagnose the biggest problem spots in the social sphere.

We had a long discussion about who can take part in the tender, and decided that this could be any Russian NGO, Planet of Hopes chairwoman Nadezhda Kutepova said. We will welcome all partnership projects with other NGOs, as well as scientific research institutes.

The tender will be announced in mid February, and the results made public sometime around mid May. The winning projects will be implemented from June 1st to December 31st.

Tasks of the Tender
At present, members of the working group do not have a common conception of the tasks to be solved by NGOs in the running.

NGOs will try, among other things, to solve technical problems and, of course, the social problems that lie on the surface  information campaigns, social protection, and medical research, Konyshev said.

However, Kutepova said that, at the first working group meeting, the environmentalists were told that technical aspects  including dosimetric control  would not be part of their remit.

I insisted that anyone who wanted to should be allowed to measure background radiation levels, she said. However, the nuclear industry says that NGOs do not have the specialist knowledge required to carry out such measuring.

Geographically, the project zone is limited to the Techa River basin in Chelyabinsk Region.

As for the basic problem—stopping dumping—this wasn’t mentioned, Kutepova said. The Techa reservoir system, through which radioactive water from Mayak enters the river, remains under the control of Rosatom specialists.

At the same time, according to Konyshev, NGOs can suggest strategic areas for solving problems with the Techa reservoir system.

We will be happy to hear any suggestion, as we currently have no solution to the Techa system problem, he said.

But these are vague decisions aimed at minimising the damage from Mayak’s current activity, and does not solve the problems that have accumulated since the end of the 1940s, Konyshev said.

A Rosatom PR Exercise
Data on radiation accidents at Mayak, the largest of which occurred in 1957, were published 15 years ago.

Since then, nothing has been done to solve these problems, Mironova said. The only thing that has been done is that enormous amounts of resources have been thrown at lobbying for the construction of the South Urals NPP, which would not only not improve the situation but actually exacerbate it.

For this reason, working group members saw Kirienko’s initiative as encouraging. Nevertheless, Mironova says that creation of the working group could just become PR for Mayak carried out by NGOs. Environmentalists are therefore determined to do everything to prevent this from happening, and to use the opportunity to put forward concrete proposals.

Similar fears were voiced by Yabloko Party politician and former Duma deputy Sergei Mitrokhin, who has for years been campaigning for the resettlement of all those living in the villages of Muslyumovo and Tatarskaya Karabolka on the Techa River. Mitrokhin said Kirienko’s initiative is no more than political advertising.

Kirienko is a politician, and is putting together his PR campaign right in front of environmental NGOs, Mitrokhin told Bellona Web.

Resettlement Within the Village
Mitrokhin repeatedly discussed the Muslyumovo problem with former Rosatom head Alexander Rumyantsev, who promised to negotiate with the Ministry of Emergency Situations, which was responsible for the federal programme Dealing with the Consequences of Radiation Accidents in the Period to 2010. However, nothing ever came of the programmes efforts.

After Kirienko’s visit, the problem of rehabilitating Muslyumovo was once again addressed by Chelyabinsk authorities. On January 24th 2006, the Regional Minister for Radiation and Environmental Safety said that the inhabitants of two streets near the river would be resettled—to somewhere else in the village. Mitrokhin said such measures are an imitation of action.

The only way to solve the problem is to resettle the inhabitants of Muslyumovo to somewhere else, because these polluted areas will continue to be a problem, he told Bellona Web.

According to Mitrokhin, these half-measures are not only insufficient, but also dangerous. People already suffering from exposure to radiation will continue to suffer small doses of radiation in the future, which is extremely hazardous.

However, the Chelyabinsk Regional administration disagrees.

There is no necessity to resettle the whole village, the Ministry for Radiation and Environmental Safety press service told Bellona Web. Mitrokhin is a politician, and his declarations are based on his political positions.

One argument of the Regional administration is that Muslyumovo residents who get new accommodation in a different place will retain the right to their old home, and after some time will move back.

People are very reluctant to move from the place they’ve lived all their lives, the ministry’s press service said.

But according to Mitrokhin, 1,500 Muslyumovo residents want to move out of the polluted zone. Mitrokhin gave this list to Kirienko in December 2005 along with a letter requesting support for the resettlement project.

Background Radiation within the Legal Limits
The ministry press service said that the background radiation level in Muslyumovo was normal, citing several studies that had been carried out since 1992.

The Medical Inspection Service and the Medico-Biological Administration set these norms, which means they don’t have to react to the radiation level, Mironova said.

However, according to Mitrokhin, radioactive dumping is carried out regularly by Mayak. Inert gases are pumped into the air, after which a cloud settles over a village and a small pandemic starts, the origins of which are hard to pin down.

Muslyumovo residents are under continual medical monitoring, and according to Mitrokhin, are participants in a large-scale medical experiment. His opinion is shared by Mironova, who said that these people are important biological material for studying people who live in extreme conditions. According to Mironova, such medical experiments are another reason why the Regional administration does not want to resettle people.