A blackout cut off electricity at the Mayak reprocessing plant in the southern Urals two years ago. Today, the power transmission lines, supplying electricity to the plant, are still in a bad condition.

Published on September 9, 2002 by Rashid Alimov 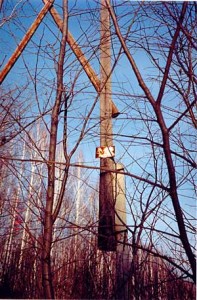 Situated in Chelyabinsk county, Mayak keeps on being one of the main plants of Russia’s nuclear fuel cycle. In the beginning of September, a big shipment of spent nuclear fuel (SNF) from nuclear submarines was sent from Kamchatka in the Far East to be reprocessed at the plant. In addition to the SNF from the Pacific Fleet, Mayak receives trainloads with spent fuel from the Northern Fleet, and from July to December 2002 ten trains are to arrive at the infamous plant. Furthermore, by the end of 2002 a warhead storage facility, built for US-allocated funds, is to be launched at Mayak.

In the meantime, according to information, granted to Bellona Web by Natalia Poteryaeva from Chelyabinsk-based Movement for Nuclear Safety (MNS), accidents are well possible at Mayak, because of shocking insecurity of its power supply.

“Power transmission lines, supplying Mayak, were built on wooden props in the 1930s and 1940s. They are absolutely out-dated,” Natalia Poteryaeva says.

Power grid failure
Exactly two years ago, on September 9th 2000, Mayak was cut off of the electricity supply for more than for 40 minutes.

Disconnection was caused by a fault of personnel of the Sverdlovenergo power circuit operating company, which resulted in a power grid accident. Besides Mayak, generators of Novo-Sverdlovsk and Argayash heating plants, one power unit of Reftinsk hydro plant, and the fast neutron reactor BN-600 at Beloyarsk NPP were halted.

Fortunately no accidents happened either at Beloyarsk NPP or at Mayak. Backup diesel generators were eventually switched on.

Power transmission lines
110 kW transmission lines, supplying Mayak, were built in 1930s and 1940s on wooden props. Life-term of the props expired in 1970s and 1980s, and they do not meet present day safety requirements for nuclear industry plants. One of the lines even lacks required carrier-current protection.

And these are the lines that have to stand long periods of hot weather, thunderstorms and high winds. Wires may be broken by fall of the trees, which has grown around the lines since the time they were built.

Any accident in the lines may result in an accident at the reprocessing plant. But today the local Chelyabenergo energy utility has no plans to upgrade them.

An out-dated high-voltage line of 110 kW goes to the substation of the warhead storage facility, built at Mayak for US-allocated funds. And any simple break of the wires may question expediency of spending of $400m, which have been invested into the storage during the past ten years.

Power company answers, but accidents keep occurring
Answering to inquiries of MNS, chief engineer of Chelyabenergo said, that the lines may be reconstructed only in 2014. The administration of the power circuit operating company claims, that in 2003 they think it is realistic to start reconstructing only of two sections out of the six, mentioned in the MNS inquiry. The answer also reads, Chelyabenergo cannot solve the problem sooner, because of the arrears of payments for electricity. And Mayak is one of the late payers, Chelyabenergo says.

Russia today goes through an electricity system reform. Unified Energy Systems, which monopoly is being liquidated, does not rush to repair the out-dated power lines. Nuclear authorities also do not seem to be concerned with the situation. It looks like that to convince anybody to make safe power supply, Mayak needs to suffer a new grid accident.

Meanwhile, on July 10th this year, because of grid errors, another nuclear industry plant — Ural Electrochemical Combine, owned by Rosenergoatom — was fully cut off for 12 minutes.

This event made Nadezhda Kutepova from Chelyabinsk region-based organization Planet of Hopes harshly criticize Ministry for Nuclear Energy. The notorious ministry claims it made a lot to develop Russia’s power system, but at the same time, it cannot provide its own plants with non-interrupting supply. “One time it’s an accidental error, but further it is a system. Where will it happen next time?” she asks rhetorically.

Mayak’s outdated system
But the question of Mayak’s safe power supply would not be fully settled even if the lines are reconstructed. Natalia Poteryaeva says, a 220 kW substation must be built at the plant. This substation should be simultaneously connected with substations of two operating companies — Sverdlovenergo and Chelyabenergo.

“Main circuits of Mayak need to be reconstructed, while they are using cut-outs of an out-dated design. Relay protection should be changed. Also, present-day requirements say systems of automatic load transfers should have two devices of power-up, and not one, as now,” says Poteryaeva.

She also says that the most serious attention must be paid to power supply of the warhead storage facility: “To ensure its safety, storage’s power transformers should be correctly connected to the main Mayak’s substation. Just remember, that this autumn Mayak’s storage is going to begin receiving weapons-grade plutonium from dismantled warheads.”