Several Russian environmental groups are protesting the Norwegian support to construct a new storage for naval spent fuel at Mayak. They claim Norway overruns the local democracy in Chelyabinsk.

Published on February 29, 2000 by Thomas Nilsen 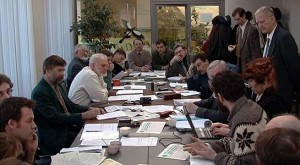 Environmental groups in Siberia, Moscow and St. Petersburg express concern over the Norwegian economical support to the planned new storage for naval nuclear spent fuel at the Mayak reprocessing plant in southern Ural. The project is a part of Norway’s assistance package aimed to tackle nuclear safety issues in Russia. But the Russian environmental groups say the project’s outcome will become the opposite of the Norwegian goals. In a letter sent to the Norwegian Minister of Foreign Affairs, the groups urge him to halt Norway’s participation in the project.

The new Mayak storage has been planned for several years and a European industrial group formed for this purpose was negotiating the deal with the Russian Ministry of Nuclear Energy. The spent nuclear fuel derives from submarine and icebreaker reactors in Murmansk and Archangelsk counties. Nobody has bothered so far to ask the inhabitants of Chelyabinsk region whether they would like such storage in their backyard. Interviewed by Bellona Web last autumn, Deputy Governor of Chelyabinsk Oblast, Gennady Podtyosov, even claimed that he had never heard about the proposed new storage for submarine spent nuclear fuel.

“The project, supported by the Norwegian government, moves the source of radiation danger away from the Norwegian border. But it actually increases the possibility of radioactive contamination of the Arctic seas through the river system that starts at the Mayak plant,” says Natalia Mironova, the leader of the local Movement for Nuclear Safety in Chelyabinsk.

In the letter, also signed by President Yeltsin’s former advisor on environmental issues, Alexey Yablokov, the groups invite Norwegian Foreign Minister, Knut Vollebek, to visit Chelyabinsk region and to see with his own eyes the impact of the long-time radioactivity discharges on health, environment and economy of the region.

“Since Norway in this case does not consider the opinion of the residents and administration of Chelyabinsk region, it contributes to the violation of the democratic procedures in Russia,” argue the green groups. They suggest it would be more expedient to build such storage in the Murmansk region, where the problems of secure spent fuel management are still pending solution.