Published on January 7, 2016 by Charles Digges

Russia’s national operator for radioactive waste management has received approval from the Arkhangelsk Regional Government to allow subsurface storage of low- and medium level nuclear waste beneath the permafrost of the Novaya Zemlya Archipelago in the Russian Arctic.

Novaya Zemlya, long used as a nuclear bomb testing site in Soviet times, has been slated by a government plan to receive radioactive waste currently in temporary storage in Northwestern Russia, such as the Severodvinsk naval yard, Alexander Nikitin, chairman of the Environmental Rights Center Bellona, said.

Nikitin, along with representatives of Russia’s state nuclear corporation Rosatom, initially presented the Novaya Zemlya storage plan to the Arkhangelsk Regional Legislative Assembly on November 25 for approval, which they received. 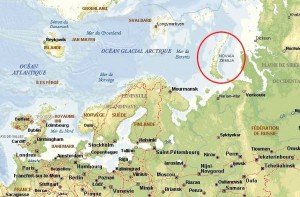 Nikitin said the storage site – or nuclear waste storage point in Rosatom parlance – is slated to be built underground, just under the archipelago’s layer of permafrost, which would itself possibly act as a barrier against radioactive leakage.

The low and medium level waste would have to be kept safe for hundreds of years by Russian nuclear waste handling standards, said Nikitin.

But recent extreme climate shifts in the Artic – including a freak winter temperature spike to above freezing only a week ago – has some environmentalists worried about the planned nuclear waste storage site and the integrity of the permafrost that its construction seems to rely on.

“One of the concepts for [radioactive waste] burial at Novaya Zemlya is that the permafrost will act as a barrier to prevent radioactive releases,” said Nils Bøhmer, Bellona’s executive director and nuclear physicist. “But with global warming, it is very uncertain how long the permafrost will remain intact.”

Nikitin said the project wouldn’t be completed for seven years – if it begins at all – and that between now and then there would be ample time for rigorous evaluation.

He hinted further that it was too early to levy criticism against the project.

“So far only the formal declaration of intent to build the site has been approved, nothing more,” he wrote in an email interview. “Construction is a long way off because an investment plan has to be approved first.”

Only then, said Nikitin, would it be clear how much the facility would cost and whether the cost would be possible in Russia’s teetering economic climate. 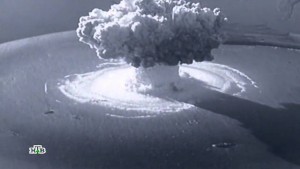 “If the economic indices are acceptable, then they will begin to work further on design, construction, and delivery of radioactive was and so on,” he wrote. “If the economy is bad, then no one will build anything – and that’s really all we can say about the site as of today.”

Bøhmer said that over this long expanse of time, the melting permafrost must be part of the equation in studying risk assessments of possible radioactive leakage from the site.

Andrei Zoloktov, an adviser on nuclear issues with Bellona in Murmansk, told the Independent Barents Observer news portal that Novaya Zemlya made sense as a radioactive waste storage facility.

But, like Bøhmer, Zolotkov said the long term storage facility had to be evaluated with an eye to advancing climate change.

“The land is already radioactively contaminated, as underground nuclear tests took place there. The archipelago is easily accessible via sea transport […] and since the territory is at a distance from population centers, it is suitable,”  Zolotkov told the portal on November 25, when the Arkhangelsk Legislative Assembly voted for the declaration of intent.

“But, of course, we have to take into account that the site in the near future will become potentially dangerous as a result of climate changes, and the melting permafrost,” he said.

Bøhmer, however, preferred the idea of burying waste nearer to where it currently located rather than shipping it to Novaya Zemlya, and cited a possible facility on the Kola Peninsula itself, which he considers less risky.

“[The Novaya Zemlya site] will involve a large number of ships filled with radioactive waste sailing the Barents Sea in the Arctic through very rough weather conditions, heightening the risk of accidents,” he said.

Aside from other radioactive storage sites near Murmansk, Zolotkov also said there were also potential sites in the Arkhangelsk Region itself.

In the end, however, he was inclined to support radioactive waste storage at Novaya Zemlya.