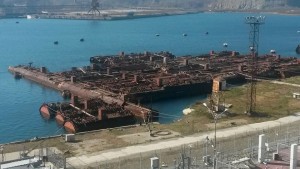 Kiriyenko said that the 16 remaining decommissioned nuclear service ships in the Northern and Pacific fleets would be brought into dry dock and dismantled by 2020, in an apparent nod to the successful progress in dismantling the Lepse, one of Northwest Russia’s most hazardous waterborne nuclear installations. 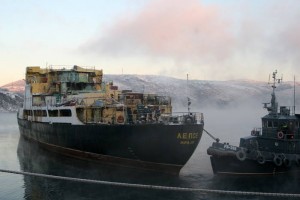 According to the nuclear.ru news portal, the vessel was last week lifted out of the water and put into dry dock – the critical first step toward unloading is radioactive cargo.

The operations for dealing with Pacific Fleet service vessels are complicated because the ships are moored at Rasboynik Bay on Cape Ustryts, and they are longer than the Sakura floating dock vessel, which is meant to shuttle them to dismantlement, said nuclear.ru.

In order to deliver lift the TNT-4 out of the water, a special extended dock vessel was developed at DalRAO – RosRAO’s Far Eastern division.

The firm told nuclear.ru that the newly engineered vessel allows it “with a quickened tempo and significant savings, to complete our part of the government program to dismantle decommissioned nuclear vessels and [their] floating technical bases.”

The vessel, in a manner similar to its cousins in the Northern Fleet, will be cut into two storage packages that will further be sent to a long term storage facility, where they will remain for 70 years, the news portal reported.

“As of July 1, 2015, five reactor compartments and three storage packages from nuclear service ships have been delivered to storage,” RosRAO reported. 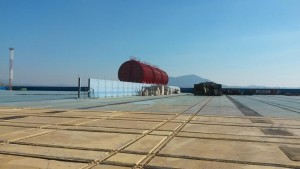 The importance of dry dock dismantlement was dramatically illustrated over a two-year period in the case of the Lepse nuclear service vessel, which for loaded and unloaded fuel from the Soviet icebreaker fleet at sea between 1961 and 1988.

After its decommissioning, the derelict radiological hazard was docked at Atomflot, Murmansk’s icebreaker port, parking 639 spent fuel assemblies, many of them damaged, in the middle of the port city. After a more than two-decade struggle with Russian authorities, Bellona finally secured its removal to the Nerpa shipyard in 2012.

Upon arrival, however, its dry dock was occupied by the Leninsky Komsomol, the first Soviet nuclear submarine. After two years of official haggling and turf struggles between Rosatom and the Defense Ministry, the Lepse finally put into dry dock and the Leninsky Komsomol will become a museum piece. The delicate dismantlement of the Lepse finally began in April, and should be completed by 2017.

Northwest Russia’s the Volodarsky nuclear service ship was successfully dismantled last year, and its radioactive cargo sent off for reprocessing and storage.

In June, Kiriyenko offered no cost estimate for the dismantlement program, and nuclear.ru offered no figures on how much will be required to break down the TNT-2.

“Of 201, 195 submarines have been dismantled, and six are in the process,” he said, as quoted by Interfax. “We’ve managed to reach a point where the vessels are no longer waiting in a queue, as was the case earlier. When [Rosatom] was put in charge of this function in 1999, 120 submarines were waiting for dismantlement.”