KRASNOYARSK, Russia – Confusion about when or if public hearings would taking place erupted Thursday during a conference that included announcements of Russia’s plans to build a laboratory to investigate deep underground storage of radioactive waste.

Published on November 13, 2014 by Charles Digges 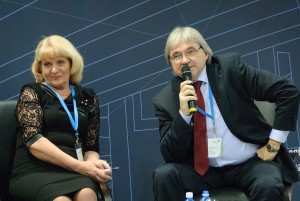 KRASNOYARSK, Russia – Confusion about when or if public hearings would taking place erupted Thursday during a conference that included announcements of Russia’s plans to build a laboratory to investigate deep underground storage of radioactive waste.

The conference attempted to draw together nuclear industry representatives and environmentalists for the development of the Krasnoyarsk Region’s economic potential to refurbish and sprout nuclear facilities that have drained much of the atomic belt’s momentum since the end of the Cold War.

Environmentalists underscored that nothing would move forward unless constructive dialogue and total transparency were the cornerstones of any nuclear industry revitalization efforts.

Aside from the repository lab, the gathering showcased other nuclear developments in Siberia centered around the closed nuclear city of Zhelznogorsk, near Krasnoyarsk, which is slated to host a facility for fabricating the controversial plutonium-uranium mixed oxide fuel, MOX.

The closed city is also gearing up to build a new pilot spent nuclear fuel storage and reprocessing facility, which will reprocess two of Russia’s thorniest types of spent nuclear fuel: that produced by VVER-1000 reactors and spent fuel from Chernobyl-style RBMKs.

On Wednesday, Russian specialists, including some Bellona staff, visit the closed city, and three waste storage facilities that are candidates for the repository lab. Non-Russian Bellona staff, because of Russia’s strict security laws surrounding closed cities, were not allowed to take part in the tour.

Of all the touchy subjects discussed at the conference, the underground laboratory, which will investigate the geological fitness of the Nizhnekansky Rock Mass in the Krasnoyarsk Region to hold medium and high-level radioactive waste for thousands of years, drew the most criticism from gathered experts.

A schematic for the underground lab as presented at the Krasnoyarsk conference. (Photo: NO RAO)

At issue was whether a number of changes in the engineering schematics for the laboratory that were approved by an October 15 meeting of the board of the Krasnoyarsk Citizens’ Assembly – which included the representatives of various government and municipal agencies, Russia’s state nuclear corporation Rosatom, ecologists and scientific activists – should not again be put up for public discussion.

The project is the responsibility of Russia’s newly constituted National Operator for nuclear waste handling, or NO RAO, in its Russia acronym. By tabling the project, Russia is joining a host of countries such as France, Finland, the UK, and Sweden, which have likewise been engaged in years long processes of citing spots for laboratories and possible repositories.

The search for repositories has come at the behest of the International Atomic Energy Agency.

The Russian laboratory’s construction is scheduled to begin next year, and be completed by 2024. But NO RAO emphasized that 2024 was not likely to bring any immediate conclusions on whether a repository could actually be built, as analysis of the data it collects will take several more years to verify.

Earlier reports by World Nuclear News estimated the prospective repository emerging from the lab studies would hold 20,000 tons of intermediate and high level nuclear waste – and that the waste would be retrievable.

NO RAO contradicted that. Russia holds an estimated half million tons of radioactive waste, and the agency said it would be years before the laboratory concluded how much waste, and what kind of waste, the deeply submerged clay geology of the Nizhnekansky Rock Mass could hold. As noted by Environmental Rights Center (ERC) Bellona chairman Alexander Nikitin – who moderated the discussion – “the lab is scientific work, which means it’s trial and error.”

“While the laboratory may be successful in discovering that the Nizhnekansky Rock Mass is suitable for a repository, it might conclude the opposite, and we may be having a similar discussion 30 years from now,” Nikitin added.

What else needs public approval?

While NO RAO representative Valery Beigul said the Nizhnekansky Rock Mass has been approved in public hearings in 2012 as the spot for the repository, the exact location of the laboratory had not yet been agreed upon.

NO RAO’s information officer Nikita Medyantsev told Bellona in a side interview that specifications for the laboratory had been put through the public hearing process in October, but that changes in certain of its specifics later had been made.

It’s not possible to say where specifically the laboratory will be located, as siting for the most geologically sound spot for a repository has yet to take place, said Denis Yegorov, NO RAO’s deputy project manager for the laboratory.

Beigul said the choice of spot, as per IAEA specifications, would have to receive the approval of whatever town or settlement eventually hosts it. “This all has to be voted on, approved by any town that puts itself forward as a candidate o let us build it,” said Beigul. “It will be discussed publically again – we are fulfilling orders from the IAEA.”

The apparent lapse in publically discussing the new adjustments to the lab’s engineering schematics angered many environmentalists who were present for the Krasnoyarsk discussions.

“It’s as if we has already had a public hearing on a bicycle and now find out we approved a car,” said Andrei Ozharovsky of Bellona. He further criticized the state environmental impact document on the laboratory, saying it was “incomplete and reads like a first draft – it feels like we are in an hurry to bury nuclear waste for thousands of years with plans that are only fit for 10.”

Indeed, Ozharovsky’s assertions were confirmed by an October report on the sibnovosti.ru news portal (in Russian). According to the agency, decisions on getting the lab up and running still depends on confirmation that its present blueprint poses no environmental dangers. The Lab’s construction and purpose

Indeed, Yegorov said that the space on the surface of the ground that would be occupied by the prospective laboratory was 5000 square meters, some thee times more than initially supposed.

The laboratory will submerge sensors and shafts 500 to 600 meters into the Nizhnekansky Rock Mass to measure its seismic stability, its geological characteristics, and most importantly, said Yegorov, its proximity to water tables.

The laboratory will also determine what natural barriers preventing the escape of radiation exists, and which will have to be engineered.

The nine years worth of tests will also confirm whether the Nizhnekansky Rock Mass meets with international criteria, recommendations and experience at analogous underground laboratories in countries that are also exploring deep repositories for their own high-level nuclear waste.

It is expected that eventually, specially packaged radioactive waste would be submerged into the rock mass at least two hundred meters of shielding on all sides consisting of five metal and concrete reinforced walls would prevent radiation from escaping into the environment above or the water tables below.

But environmentalists at the conference made it clear that no new steps in the process would be accepted without total transparency and dialogue with the public and environmental groups.